Heading into the show’s 50th anniversary Doctor Who executive producer and head writer Steven Moffatt had been talking a mean game.  To hear Moffatt speak about what was planned for the 50th anniversary was to seemingly have all of your hopes confirmed even though he actually never really said anything specific.  He just seemed so dang excited and drunk with ambition.

And then it turned out we were getting 8 new episodes to conclude season 7, a 50th anniversary special, the standard Christmas special, and a telemovie depicting the origin of Doctor Who with the mean groundskeeper from Doctor Who playing William Hartnell.  Sure, that’s pretty good, but we used to get 13 new episodes and a Christmas special every year, a total they still fall short of in this scenario.

Really, Moffatt?  That’s all you’ve got?  Well, yeah, but it all sounds positively brilliant.  In fact, the news on this front is coming at us so fast we haven’t had the time to cover it all individually.  So, here’s a rundown of everything that has gone down over the past week or so:

March 28. Moffatt Confirms “All Will Be Made Clear” About The Mystery of Clara, The Impossible Girl By The End of Season 7

The exact quote from his interview with Collider is as follows: “You will uncover the mystery of Clara, in the next eight episodes. All will be made clear, and you’ll get your answer that way.”  I have officially thrown my support behind the fan theory that Clara is the same person splintered throughout time, ala the Jagaroth from the classic Tom Baker story “City of Death” (via DenofGeek.com).

March 30. David Tennant and Billie Piper Will Be Returning in the 50 Anniversary Special, Which Has Also Added John Hurt To Its Cast 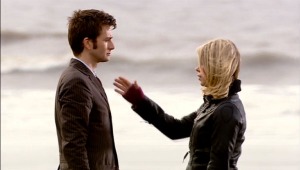 Tennant had previously said “no” with his words but “yes” with everything else at his disposal when asked if he would be back in the anniversary special.  Billie Piper had been far more convincing with her denials.  However, the smoke screen has been lifted – Rose and The 10th Doctor will be back!   My bet is this will be Rose and the 10th Doctor’s clone, who was last seen in the season 4 finale “Journey’s End.”

British acting legend John Hurt is also in the cast of the special.  Maybe a Dalek will burst from his chest as an homage to his infamous death scene in the Ridley Scott classic Alien (via DenofGeek.com). 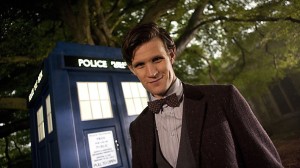 The news comes from an interview Smith conducted with the British magazine Radio Times.  This refutes previous rumors that Smith’s Doctor would re-generate during the 2013 Doctor Who Christmas special.  Simply because Matt Smith said so in an interview does not make it official, but let’s just call it good and say Smith is going to be with us at the very least into the 8th season (via io9.com).

April 1. The First Script Read-Through for the Cast of the Anniversary Special Produces a Picture of Matt Smith and David Tennant Together That Temporarily Blows Up the Internet

Also revealed in the pictures from the table read is that Jenna Louise-Coleman’s Clara is definitely in it as is Gavin & Stacey star Joanna Page, who is always immensely entertaining on The Graham Norton Show (via DenofGeek.com).

April 2. Fan-Favorite Classic Era Villains The Zygons Will Be in the 50th Anniversary Special.  Pictures of How the Zygons Looked Back in 1975 Reminds Us How All Villains Used to Look Like Guys in Bad Rubber Costumes

The Zygons were last seen on Doctor Who in the 1975 Tom Baker story “Terror of the Zygons,” which will be released on DVD for the first time later this year.  In fact, this is the only time they have been seen outsider of re-used archival footage, yet their popularity among the hardcore faithful is immeasurable (via DenofGeek.com)