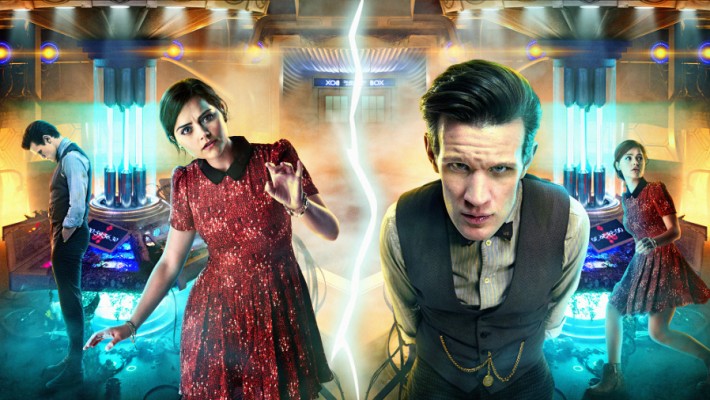 Doctor Who just potentially flashed a giant middle finger to its audience last night with the giant reset-button conclusion to “Journey to the Center of the Tardis.”  My reaction?  To quote Communtiy, “I’m not mad; I’m just disappointed.”  Okay.  I’m lying.  I’m kind of mad.

Brian: “But theoretically if someone were to watch the events from that simulation from start to finish only to find out none of it happened you don’t think that would just be like a giant middle finger to them?”
Stewie: “Well, hopefully they will have enjoyed the ride.”

To be a science fiction fan is to begrudgingly accept that around any narrative conflict could be lurking a deus ex machina-esque solution.  Something you and the characters in the show have no way of predicting can suddenly solve any problem (often in defiance of logic) at the last second, and everything you have seen can be completely undone in the science fiction version of “it was all just a dream”: the temporal paradox.  As argued by Family Guy, such solutions inevitably threaten to “piss a lot of people off.”  Why? Because the solution may not feel completely earned (looking at you Deep Space Nine and your cavalry of wormhole aliens) and gives the audience the impression that their time has been wasted.

Doctor Who just wasted my time last night.  I think.

In “Journey to the Center of the Tardis,” we were promised a trip to the many heretofore unseen interior chambers of the iconic spaceship and along the way we got some major plot advancement and character development.  Finally, the Doctor addressed the dead girl in the room, and revealed all to Clara (Jenna Louise-Coleman): that he has met two other version of her, both of whom died, at different points of time and space.  As such, he has no idea what she is and stands in fear of her.  However, her befuddled reaction indicated she may in fact, at least as far she knows, be a simple human girl.  Moreover, in her own sleuthing in the Tardis Clara came upon a book containing the Doctor’s real name, which the show is sledge hammer-style beating home to us is something which should not be known by anyone.

Then the show hit the giant re-set button by having the Doctor hit a “big friendly button.”  This was an admittedly so on-the-nose-to-somehow-still-seem-funny acknowledgement of what the show was up to: everything we had seen was being undone.  Whereas before a scrap salvage team with basically a really fancy magnet caught and unintentionally crashed the Tardis with Clara trapped inside now the salvage team declined to pursue the Tardis and the Doctor and Clara went about their day, incident free.  This was an episode in which the Tardis appeared to have been damaged beyond repair by the end meaning one could tell a giant re-set was coming because obviously the show would need to put the Tardis back to default settings.

For better or worse, the show has done this type of thing before many times.  The most egregious and notorious example is the season 3 finale “The Last of the Time Lords,” in which an entire year of a Master-occupied, Toclafane-enforced Earth is erased.  Basically, it amounts to, “Remember how the Master was Earth’s cruel overlord for an entire year with the Doctor his prisoner?  Yeah, that never happened.”

Crucially, though, all of our primary characters remember everything.  The major plot events are erased from history, but Martha and her family, Captain Jack, and the Doctor each remember everything.  Her memories completely in-tact, Martha decides to part ways with the Doctor, having seen and not liked the lengths she will go to for a man who will never love her the way she loves him.  Captain Jack realizes how much he misses his new nuclear family at Torchwood and departs to rejoin them as a friend and leader (if you’ve seen the second season of Torchwood you’ll know this does not go as well as he expected).  The Doctor maintains the trauma of having tried and failed to save the Master, again made the last of the Time Lords.

Of course, that was nothing compared to what Steven Moffat did with the season five finale “The Big Bang,” in which all of reality is completely re-set.  By the end, we are briefly led to believe that the Doctor has been vanquished from reality and Amy and Rory have no memory of him.  However, through piecing together subtle clues left to her by the Doctor this leads to Amy’s defiant (and absolutely brilliant!) proclamation, “Raggedy man, I remember you and you are late for my wedding!”  The events may have been temporarily erased, but they are ultimately restored in a particularly heroic moment for both the Doctor and Amy.

However, the show usually gets away with it by only erasing plots points, such as the Master taking over the Earth, but not character development.  There is a notable exception which actually inverts that formula, in which at the conclusion of the fourth season all of the actions taken by the Doctor and Donna Noble stand but her memories of them are erased thus robbing her of the character enrichening exposure to the 10th Doctor.  In that instance, the show rather effectively played the erasure of her character development for its obvious tragedy.

The ending of “Journey to the Center of the Tardis” may have actually erased both plot points and character development.  There are hints that perhaps the Doctor’s erased day has left some impact, with the leader of the salvage team now inexplicably (I guess just because the Doctor told him to remember it, and he somehow magically did) showing “a little, tiny scrap of decency.”  Moreover, if the Doctor does not actually remember any of the events of the lost day he at least knows a day has been lost, telling Clara she’s had “two days crammed into the space of one” before asking her whether or not she feels save with him.  We know that in the course of “Journey to the Center of the Tardis” she admitted to being terrified of him, although that only came as he was accusing her of being some sort of trick or trap.  However, now Clara clearly appears to have no memory of the events whatsoever.

We’ll have to see how this plays out.  Amy’s memory was actually robbed several times, having Rory erased from her memory for a while and then remembering the Doctor but not Rory in “The Wedding of River Song.”  However, on both occasions along with the aforementioned moment from “Big Bang” the memory loss was a prelude to a triumphant moment of Amy reclaiming her agency, brilliantly written and performed on every occasion.  Something similar could happen with Clara and negate all of my concerns.

There’s something about this time, though, that feels different.  In the Moffat era, when the re-set button/memory loss device has been used it has felt clever because it created an interesting narrative tension that both the Doctor and the audience knew more than the companion.  The Doctor is often a god-like entity meaning he pretty much knows more than everyone.  However, placing us on his side as he, for example, tiptoed emotionally around Amy during season five when she had no memory of Rory, whom we had seen die, was brilliant.  Finally making some serious progress with Clara and the Doctor only to have it taken away, at least from Clara, on the other hand, feels lazy and cruel.

The conclusion rendered far too powerless Clara, who can only meekly proclaim, “I don’t want to forget, at least not everything,” before the Doctor completely ignores her, patronizingly, and makes her forget everything.  That is, of course, if I am right.  Maybe this is building to something cool, but for the first time in my watching of modern Doctor Who it felt like the worst type of “it was all just a dream” conclusions in that I felt as if nothing was truly accomplished.  It is cool, I guess, that we know there is a book in the Tardis’ library which contains the Doctor’s name, and that Clara claims ignorance to any of the Doctor’s claims even in a moment of near-certain death.  However, without any lasting impact all that does is provide more pieces to a puzzle while rendering increasingly hollow the actual characters on the show.

Based upon an early reading of a handful of “Journey to the Center of the Tardis” reviews (several of which are linked to as related articles), it would seem as if I am in the minority in my viewpoint (although Charlie Jane Anders at io9.com is with me).  Bloggers and paid reviewers alike seem to have really liked this episode, while perhaps acknowledging the ending as a slight annoyance.  The episode was certainly enjoyable, but that ending?  It was one re-set button ending too far for me.