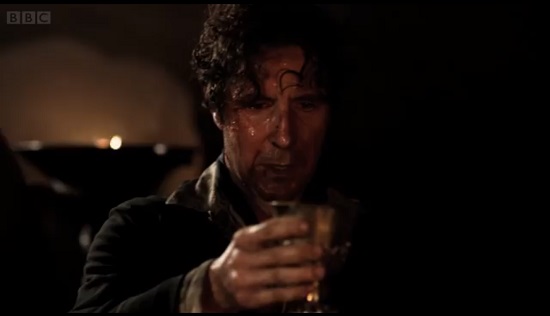 After months of “he’s in it”/”he’s not in it” rumors, we now know how exactly Paul McGann features in the forthcoming Doctor Who 50th Anniversary  special “Day of the Doctor.”  He’s not in it.  Don’t despair, though because as has now been widely reported (we found out through LivingTheGeekLife.com) they instead made him the star of a 7 minute long prequel mini-episode called “Night of the Doctor.”  It was written by Steven Moffat, and the BBC put it up on their YouTube Channel.  Here it is:

If you don’t realize it, that was kind of a big deal.  McGann starred in the 1996 Doctor Who TV movie that was meant to be a backdoor pilot for a new TV show on Fox in America.  Instead, the movie and its related ratings were so horrible McGann never again got the chance to play the Doctor.  That had been quite a shame.   He was an excellent doctor, funny and enthusiastic like most Doctors, but he also had a then very new air of romance to him.  However, he’s the only good thing in a very, very not good movie.  Here’s the trailer:

This is the same movie that redesigned the interior of the Doctor’s TARDIS to look like the set of Meatloaf’s music video for “I’d Do Anything for Love (But I Won’t Do That).”  The horror…the horror.  To be fair, some people really like this movie.  Around here, we merely love to mock it.

When Russel T. Davies and Julie Gardner revived Doctor Who in 2005, they very well could have simply ignored the existence of the movie and Paul McGann’s Doctor.  However, at that time many fans considered McGann’s Doctor to be the current Doctor since he was the last man to play the role and was never seen to regenerate into anyone else.  There were multiple original Doctor Who novels centered around his Doctor, and in 2000 McGann began lending his voice to Big Finish audio adventures featuring his Doctor and original, brand new companions.   As such, Davies and Co. ended years of nerdy Doctor Who arguments by officially numbering their Doctor, the one played by Christopher Eccleston, as the 9th Doctor, placing him in succession to Paul McGann’s 8th Doctor.

With McGann so active with the audio adventures, even getting his own line of them (“The New Eighth Doctor Adventures”), while also still physically resembling his old 1996 self there has long since been hope and speculation that current Doctor Who might bring him back somehow in flashback.  This was magnified earlier this year when Moffat threw us all for a loop at the end of “The Name of the Doctor” by revealing there was a secret un-numbered Doctor we never knew about.  We speculated this meant this person came in-between McGann and Eccleston.

That’s exactly what they have done here, giving McGann a second crack at playing the Doctor on film in the process.  Furthermore, they took it a step further and included a moment that will make absolutely no sense to anyone unfamiliar with the audio adventures.  As McGann’s Doctor lists the name of his beloved companions (“Charlie, C’Rizz, Lucie, Tamsin, Molly”) prior to drinking and thus becoming the War Doctor he is listing the actual names of characters who were created for the various 8th Doctor Audio Adventures.  Those characters are part of main Doctor Who canon now because the real live-action show just acknowledged them.  Funny little aside, though, whose name didn’t he mention?  Grace, the one companion we’ve actually seen him have on film in the form of the TV movie.  Frankly, Grace was so horrible she was better left unmentioned.

So, the work Paul McGann began as the Doctor in 1996 finally comes to an end, on film at least (although there’s always future anniversaries and multi-Doctor stories).  What did you think?  Did you like it?  Did it feel a bit more Russel T. Davies than you expected, what with a mysterious cabal of women operating off of some vague prophecy?  Or has the crappiness of the 1996 movie prevented you from ever liking McGann’s Doctor, even a little, thus making this mini-episode a far more academic exercise for you?  Let us know in the comments section.

If you have yet to see it here is the full trailer for the 50th Anniversary special “Day of the Doctor” that will see Matt Smith’s Doctor and his companion played by Jenna Coleman team up with David Tennant’s Doctor and Rose (Billie Piper) along with John Hurt as the War Doctor:

Check Out Some of Our Other Doctor Who-Related Articles: