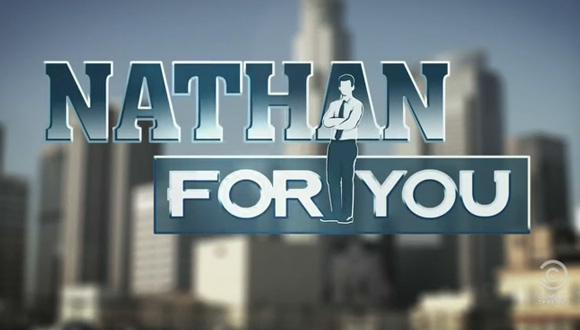 Do we have to start paying attention to all of those new shows Comedy Central won’t shut up about?  In 2013 alone, the network has premiered The Kroll Show, The Jeselnik Offensive, The Ben Show with Ben Hoffman and Nathan for You, with Inside Amy Schumer joining the list after premiering its first episode last night. Three of the shows (Jeselnik, Nathan, Kroll) have already been renewed for an additional season, joining the returning Key & Peele as new multi-season sketch/hybrid talk-documentary shows on the network.  Perhaps more importantly, none of the shows outright suck, with the worst meriting no lower than a C if graded on an A-F scale.  Granted, that’s barely passing, but consider how few Saturday Night Live episodes rise above a C grade if we’re being honest.

Here’s the bad part: except for Inside Amy Schumer, all of the shows have already ended their first seasons with Key & Peele already moving to a third season.  You see, Comedy Central is like a spurned lover venturing back into the dating pool.  They really want to commit to something new, but their heart still hasn’t mended since Dave Chapelle walked out on them with an explanation so vague they can’t help but wonder what they could have done differently.  So, now it is trying speed dating with these new guys (and one gal), giving Jeselnik 10 episodes and everyone else only 8 or 6 episodes to see what they’ve got.  The result of this commitment-phobic (or, more accurately, cash-strapped) network’s minimal season orders is that most of these new shows aired all of their episodes in less than two months, which is bit unusual for American television (as opposed to British television, where it’s mostly the norm).

Here’s the good part: it’s absolutely not too late to get on board with Inside Amy Schumer and you can catch up with the other shows through the many clips and shortened episodes available on comedycentral.com.  Plus, entire episodes of all but Key & Peele are available on Hulu Plus.  Want a little guidance?  Below is my take on each show (in alphabetical order): 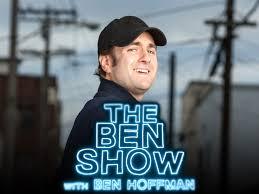 The Star: Comedian Ben Hoffman, who worked on Sports Show with Norm MacDonald.

The Show: A hybrid of sketch comedy and cringe-inducing documentary comedy, each episode finds Ben deciding to try something new (such as going on a blind date or forming a band) and consulting loved ones and strangers alike about it along the way.  This primary storyline for each episode is intermixed with unrelated sketches, with a recurring sketch being fake auditions for fake movies.

The Good: Todd Bridge’s animated stories of being a crackhead [as seen below] are uniformly hilarious, like an animated version of the hilarious recurring Charlie Murphy sketches from The Chapelle Show.

The Bad: The stabs at social media, such as Facebook and Twitter, mostly involving Ben yelling at the screen about re-tweeting his own tweets or liking stuff on Facebook, are more annoying than anything else. 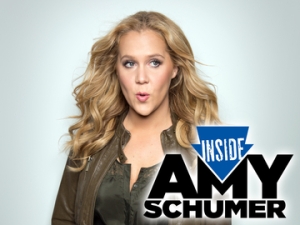 The Star: Comedienne Amy Schumer.  Her comedic persona is best summarized by the title of her one-hour stand-up comedy special: “Mostly Sex Stuff.” A typical joke from her stand-up goes as follows, “This is a big week for me.  I finally had sex with my high school crush [applause].  Thank you, but I swear he now expects me to go to his graduation [pause for laughter] like I know where I am going to be in 3 years.”

The Show: Gender and sex-centric sketch comedy mixed with woman-on-the-street interviews which attempt to segue into the next sketch.  At this point, only one episode has aired.

The Good: In the pilot, Amy interviews a gorgeous, vaguely European model, who nonchalantly reveals how relatively easy her life is solely due to her beauty.  Amy’s on-the-spot reactions are natural and hilarious, such as when the model laments how the large size of her breasts has actually cost her jobs in the modeling world and Amy quickly observes, “Yeah, no one feels bad for you, honey.”  In writing, that sounds harsh, but in the interview it is actual cordial and well-received.

The Bad:  The best part of this ostensibly sketch comedy show might be everything other than the actual sketches, which are uniformly lackluster.  One such example of an okay-but-not-great is below: 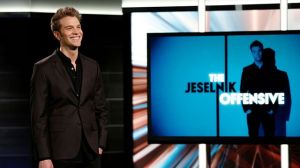 The Star: Anthony Jeselnik, who wrote for Late Night with Jimmy Fallon for its first season before moving on to writing for Comedy Central Roasts.  He is probably most known for losing just as many Twitter followers as he routinely gains with his combative and gloriously (or disgustingly, depending on your pov) non-PC humor.

The Show: On Comedy Bang Bang, Jeselnik described his new show as being everything he always wanted to do at Jimmy Fallon but was turned down because it was too mean or nasty.  This means a talk show in which nothing is off-limits coupled with weekly panel discussions with friends, such as comedy scene stalwarts Patton Oswalt, Aziz Ansari, and Doug Benson.

The Good: The panel discussions [an example of one is included below] typically play like the best comedy podcast you should be listening to but aren’t, and the recurring bit involving inviting audience members to engage in racist competitions is so wrong it’s funny.

The Bad: The show is not for the easily offended, and in an effort to offend sometimes Jeselnik fails to actually make good jokes.  As a result, some of the bits are funnier ideas than they are entertaining show segments, such as Jeselnik mocking the pictures of children of celebrities in the same way we routinely mock celebrities (e.g., looking at Jennifer Lopez’ daughter and criticizing her for not wearing enough lipstick). 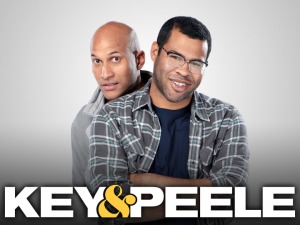 The Stars: Comedians Keegan-Michael Key and Jordan Peele, both of whom previously starred on MADtv (6 seasons for Key, 5 for Peele)

The Show: Sketch comedy hosted by Key & Peele who, in front of a live studio audience, deliver brief stand-up and introduction of sketches, a format very similar to that used on The Chapelle Show. The sketches range from riffs on pop culture, such as a skewed views of the buddy cop genre, to absurdist humor.

The Good: The show is most known for its various sketches involving Jordan Peele’s impeccable impersonation of President Barack Obama, such as the hilarious one involving a college-aged Obama discussing the proper distribution of woman to men and marijuana at a party [seen below].

The Bad: Anything not involving Obama is far more hit or miss.

The Star: Actor and comedian Nick Kroll, most known for the FX fantasy football-centric series The League.

The Show: Heavily serialized sketch comedy intercut with brief segments of Nick Kroll offering an anecdote or comedic observation while standing in front of a blue screen.  The show is centered around a vastly growing network of reality television shows, beginning with Kroll and Jenny Slate’s Liz & Liz Kardashians-parody which begets multiple spin-offs.  This format  means that characters from seemingly stand-a-lone, unrelated sketches may ultimately end up drafted into one of the reality shows.  Even the recurring characters who seem to exist outside of the show’s shared universe progress throughout the season, such as chatty NBA referee who ends up in prison.

The Good: The serialized format rather knowingly skewers the conventions of reality television, and Jenny Slate’s work as Liz is impeccable.  I don’t know that I completely “get” the recurring sketch involving the DJ El Chupacabra, yet it always makes me laugh.

The Bad: The sketches are sometimes just plain weird rather than weird and funny, and some of the recurring characters wear out there welcome faster than the show realizes.  Part of the downside of the serialized format is that a lot of the sketches require more context to achieve the full effect.

Included below is one of the shows mere stand-alone and occasional animated sketches which I think is funny. 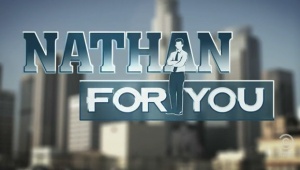 The Star: Canadian Nathan Fielder, who you may have noticed in the background or as the sound guy on Jon Benjamin Has a Van.  He was a writer for Important Things with Demitri Martin.

The Show: Prior to moving to Toronto and becoming a comedian, Fielder’s plans called for him to go into the business world to go along with his business degree.  As such, his show marries both worlds by presenting him as a consultant to struggling businesses who might be desperate enough to implement one of his crazy, but not-too-crazy ideas.  This has the trappings of a prank show, but the intent is that whatever idea Fielder proposes be funny but actually something that might help the business.  The humor comes from the reactions of the businessmen as well as the “holy shit!’ aspect of when they put his plan in action.  His most notorious plan from the show to date is suggesting a frozen yogurt shop introduce a poo-flavored yogurt to stir controversy and court publicity.

The Good: Everything.  Everything about this show is amazing.  As opposed to a Sacha Baron Cohen-style flamboyant character interacting with the real world, Fielder approaches his real world targets with an incredibly straight-forward and confident delivery.  This, in fact, might be a theme of the show: how much can you get away with if you are completely confident in everything you do, no matter how crazy?  This is epitomized in the included video in which Fielder interviews at a law firm but sets up a live video feed and monitoring station which allows a 7-year-old to view the interview and feed all of the answers to Fielder, such as nonsensically asking the poor “this is not what I signed up for” interviewer, “Do you like to skateboard?”

The Bad: Like a Steven Wright-type, Fielder’s deadpan joke delivery may not ring as humorous to some.

What do you think?  Hate all of the shows?  Still incensed I dared to besmirch the good name of SNL in the opening paragraph?  Like some of the shows but not others?  Or just want to politely quote random films at me, such as randomly telling me “And make it a good one!” as a quote from Back to the Future III?  Sure, you can do that, I guess.  Either way, do so in the comments section.

BTW, the Titans of Comedy in the article title is a reference to a recent Comedy Bang Bang episode in which host Scott Auckerman jokingly referred to guests Fielder and Jeselnik (as well as Eugene Mirman) as titans of comedy.