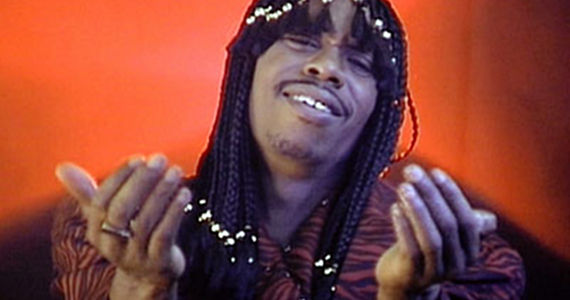 Historically speaking, to watch anything not named South Park or feature Jon Stewart either as host (The Daily Show) or producer (Colbert Report) on Comedy Central is to knowingly give your time away to something which is unlikely to last beyond a season or two.  However, as previously discussed the network has been in hyper-development mode lately, giving out second seasons, if not third seasons, to a lot of its new shows.  Plus, Tosh.0 and Workaholics don’t appear to be going anywhere anytime soon.

A show with a far more uncertain fate is Inside Amy Schumer, which airs its second episode of a six-episode first season tonight.  Last week, Tosh.O, which airs before it, segued into the premiere by having host Daniel Tosh sarcastically remark, “Stay tuned for Amy Schumer’s first television show, and Comedy Central’s 25th attempt at a sketch show.”

25th?  That can’t be right, can it?  Well, it’s not.  Since its inception as The Comedy Channel in 1989, Comedy Central has aired 13 different original sketch shows, not counting its active sketch shows (The Ben Show, Key & Peele, Kroll Show, Inside Amy Schumer) nor those which the network syndicated rather than produced.  However, as befalls the fate of pretty much any televised sketch comedy not named Saturday Night Live very few of the shows have been hits, though typically gaining a cult following through home video.  One of them even starred a pre-Strangers with Candy Stephen Colbert!

Here they are, in alphabetical order, which means we start with the real breakout star of the bunch (sample videos are provided where available):

The Star: Comedian Dave Chappelle, in a star-making performance before he quit the show three episodes into the third season and retreated from the spotlight.

The Show: Pre-taped sketches introduced to a live studio audience by Chappelle, who typically performs some stand-up comedy in front of the audience as well.  The humor on the show primarily deals with matters of race.  It scores several ridiculously popular recurring sketches (co-star Charlie Murphy telling crazy stories about being a member of his brother Eddie’s entourage during the 1980s) and catchphrases (e.g., “Is Wayne Brady going to have to choke a bitch?”).

The Star(s): Amy Sedaris, Paul Dinello, Stephen Colbert, Jodi Lennon, and Mitch Rouse, all of whom came from The Second City.  Sedaris, Dinello, Colbert, and Rouse would create Strangers with Candy one year later.

The Show:  All of the sketches in the series are implied to take place in the fictional suburban setting of the Quad Cities.

The Show: Each episode focused upon a single theme, or “important thing,” and weaved together sketches with Martin performing in front of a live studio audience.  Martin also occasionally featured musical comedy with funny guitar-based songs.

The Star: Comedian Jeff Dunham, who is mostly known for his ventriloquist stand-up act with a rotating set of foul-mouthed puppets.

The Show: Combination of Jeff’s live stage show and sketches involving Jeff and his puppets interacting with people in and around Los Angeles.

The Show: Jon is an investigative news reporter who travels in a van with his regular crew of a cameraman, sound guy, and producer to cover truly bizarre stories.  All of these sequences are scripted and intermixed with unscripted man-on-the-street segments typically involving Jon interviewing New Yorkers.

The Star(s): Comedians Michael Ian Black and Michael Showalter, of prior sketch shows The State and Stella.

The Show: Michael & Michael play fictionalized versions of themselves who star on a sketch show together but constantly attempt to one-up and undermine each other.

The Star: Comedian Carlos Mencia, who is apparently among the most hated comedians by other comedians.  He has consistently been accused of plagiarizing jokes or entire sections of acts from other comedians.

The Show: A hybrid stand-up/sketch show featuring Mencia delivering portions of a stand-up routine then segue into or comment upon/react to a sketch.

The Star: Comedian Nick Swardson, best known for his recurring role as Terry on Reno 911 and showing up in all of Adam Sandler’s films.  He probably wants us to just forget his starring role in the atrocious Bucky Larson: Born to Be a Star.  Well, tough, Swardson.  We will never forget, you hear us!  Never!

The Star(s): Comedians Michael Ian Black, Michael Showalter, and David Wain, with Stella being the name of their long-standing comedy troupe.  Wain is best known for his work behind the camera, directing the cult classic Wet Hot American Summer, the Paul Rudd films Role Models and Wanderlust, and several episodes of Childrens Hospital.

The Show: Hybrid of a sitcom and a sketch comedy show.  The show actually has a basic set-up involving the two Michaels and David as three men who constantly wear suits and live together in a New York apartment and regularly interact with three girls who live downstairs from them.  However, the sitcom storlines would routinely give way to unrelated sketches.

The Star: Actor Doug Dale, who served as the show’s host.  The show is more known for its creator and co-star Robert Smigel, who himself is most known as the voice of Triumph, the Insult Comic Dog from the Conan O’Brien Show.

The Show: A spin-off of the popular recurring Saturday Night Live animated sketch of the same name, the actual show was basically an updated Pee-Wee’s Playhouse.  Foul-mouthed puppets are featured in a kids show setting with an enthusiastic host, yet their actions are decidedly anti-kids show.  The puppets would routinely ignore everything the show’s host wanted them to do.

The Star(s): Matt Besser, a pre-Saturday Night Live Amy Poehler, Ian Roberts, and Matt Walsh, with the show’s title derived from the name of the comedy troupe.  Since the show, Upright Citizen Brigade has opened two theaters, one in New York and one in Los Angeles, where aspiring actors can study improv comedy.

The Show: Within the show, the Upright Citizens Brigade was an underground organization dedicated to creating and monitoring chaos from their secure underground base.   The sketches were events being either monitored or caused by the UCB.  Most episodes also ended with hidden-camera pranks featuring the cast, in character, referencing some event from the episode, such as attempting to buy a fake drug from a genuinely real world drug dealer in a dance club.

The Star(s): Michael Ian Black, Thomas Lennon, and Keri Kenney, the latter two of whom went on to great success in Reno 911.

The Show: A satire of European variety shows in which Lennon and Kenney starred as the hosts.  There were sketches, but it was a bizarre show.  They would include audience members on interactive game shows, but structure the game shows around a rather odd premise, such as forcing an audience to attribute a short recording to either that of an animal or Robert Plant.  They even had their own satirical version of the In Loving Color Fly Girls.  Routinely entering into the insanity were genuine musical guests and performers appearing to promote their film/show/album.