An appreciation of the printed word (hopefully even printed on paper and bound together with a decorative cover) is a dying concept. We hope to, slowly but surely, rectify this tragic situation by introducing and discussing works, both fiction and nonfiction, modern and classic, that we feel warrant purchasing/ checking out from your local library. In other words, You Gotta Read This! This new, regular feature will be mainly spoiler-free. I will simply be providing a plot synopsis and the reasons this work warrants reading.

“And so we beat on, boats against the current, borne back ceaselessly into the past.” 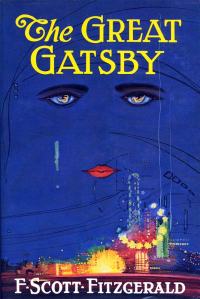 Say the title The Great Gatsby to the average individual, and horror-filled, traumatic memories of high school English classes come flooding into their brains, overwhelming their very senses. No doubt, the words “boring,” “endless,” (though the novel itself is barely 50,000 words long) and “whiney” would escape their mouths if forced into a conversation regarding their feelings toward the work. Thoughts of “West Egg vs. East Egg contrasts,” “green light symbolism” and the recurring theme of illusion vs. reality may force them to emit a groan of disgust, as well as a sigh of relief that they never have to think of a novel in that way (or maybe even read a novel) ever again.

However, the book never really seems to go out of fashion. Stephen Colbert just last week made a plea for his viewers to read it, in hopes of a bookclub discussion Thursday night on his show, and Baz Luhrmann’s, no doubt, rapid cut-filled, anachronistic, visually overwhelming film adaptation of the story hits theatres on Friday.

It was also made into a pretty-looking but lifeless adaptation starring Robert Redford, Mia Farrow, and Sam Waterston (before he was working as a a prosecuting attorney or selling us on the virtues of life insurance) and a made for television film adaptation in the 1990s featuring Mira Sorvino and a young Paul Rudd. For all the proverbial eye rolls the novel inspires in the teenagers forced to read it under the guidance of an overly enthusiastic teacher, the novel continues to captivate.

Let me make this clear, first and foremost: I am not one of those individuals discussed in my opening. I read it in English class as a sophomore in high school, but I was swept into the world author F. Scott Fitzgerald created with the opening utterance of  “in my younger and more vulnerable years…” (the novel’s opening lines). I’ve probably read the novel five or six times since I was that impressionable sixteen year old girl, and it never fails to move me. I can still find my eyes watering when I read Fitzgerald’s final, brilliant pages, but I tell anyone who sees me that I’m suffering from allergies (I can trust you, intrepid readers, to keep my secret, right?).

The novel opens with Nick, the young narrator who finds himself intertwined in the world of the enigmatic Jay Gatsby and his romantic dreams that slowly fade into the night sky, like a star in the first beams of harsh, morning light. By telling the story from Nick’s perspective, Fitzgerald colors every action that happens in the novel, without the reader realizing it. Nick, though he states a reluctance to render judgement, still perceives the unfolding events in a certain fashion, simply because he is not an omniscient narrator. Nick exists as the Fitzgerald surrogate, giving us his view disguised as a first-person narrator. He lacks access to the inner thoughts of any character except his own, and as a result every character seems to remain just out of the reader’s grasp, just as Daisy remains just out of Gatsby’s grasp.

Ah, Tom and Daisy. They exist as the shallow, boderline-symbiotic couple at the center of much of the novel’s plot machinations. Tom, the boorish, aggressive, snobbish upperclass man who views the world as mere possessions for him to own and exploit. Gatsby sees him as the sole obstacle to the life he wants (namely, his lost love and Tom’s wife, Daisy), and Tom uses that knowledge to heap abuse upon Gatsby at every moment they encounter each other.  Then we have Daisy. Daisy, who Gatsby makes to solution to all of life’s mysteries and conflicts and never sees her for what she is: a shallow, sad young woman who loves her social position far more than she could ever love another human being.

At the novel’s conclusion, only Nick seems to understand both Tom’s and Daisy’s true nature, stating, “they were careless people, Tom and Daisy — they smashed up things and creatures and then retreated back into their money or their vast carelessness or whatever it was that kept them together, and let other people clean up the mess they had made.” For all of the perceptions that high schoolers may take nothing away from the inner working and spinning wheels of The Great Gatsby, is it so difficult to see Tom and Daisy echoed back in the isolated, bubble-like existences of wealthy politicians or socialites, who live separately from the everyday workings of reality, unaware that their actions may have any consequences on anyone else?

Fitzgerald seemed to understand the shallow, yet sad, lonely nature of the wealthy, as personified through his array of characters who exude a sheen of privilege and prosperity, but conceal despair and feelings of being trapped in their social place, no matter their desire to escape, underneath the surface. The upper class exists in Fitzgerald’s world as an impenetrable fortress from which no one can enter who was not born there and from where no one can escape.

That description functions as a perfect segue into a discussion of the enigmatic, solitary, central Jay Gatsby. I find every aspect of Fitzgerald’s world arresting, but there is a reason Gatsby inspires so much fascination and discussion among literary analysts (to the extent they may rob readers of savoring any of the flavors Fitzgerald could, and does, supply — sucking all of the flavor out his masterpiece like, as Shakespeare himself once wrote, “a weasel sucks eggs”): he exists as an unknowable, yet all-too-human individual, first seen from afar (and afar he remains for much of the work, as so much of his life is built upon quicksand illusions, delusions, and outright fabrications), reaching for the far away green light, a symbol for the goal and prize he hopes to claim as his own.

Gatsby’s major themes involve the nature of the upper class and the brutal knowledge that no matter how much one attempts to escape one’s past, that past is always there, haunting and drawing you back into its web.

The terrible and tragic conundrum at the center of Gatsby’s dilemma is his desire to cease being the poor, unworthy of Daisy’s love, nothing he once was and become the type who deserves her affection: the epitome of perfect wealth and sophistication. However, this desire to leave his past in the dust behind him stems from a past encounter (namely, Daisy) that he cannot forget. Basically, his desire to escape his past stems from a past he cannot, and will not, set aside. He believes he is creating a future for Daisy and himself, but all he is doing is clinging to fragile illusions and fading, idealized memories of a woman he made the end all-be all of his existence. Alas, he fails to realize she is an all-too-mortal being. By wishing to escape his past, he remains trapped there. It’s the brutal truth of a problem for which no solution can be found.

As the novel concludes, with the glamour of Gatsby’s dreams and lifestyle scattered and all those who attended his parties seeking the next carousel upon which they can ride leave his house lonely and vacant, only Nick is left to assess and evaluate the losses that have accumulated and the value of anyone’s desire to leave the past behind and pursue a new future. Nick, initially, seems skeptical, but he acknowledges the optimism of the quest for “one fine morning–” when may finally attain the green light we are all pursuing, be it a better life, lost love, or a good grade on a Great Gatsby essay. If there is anything a high school reader should take away from the novel (and there are several facets of the work worth remembering), it should be the beautiful, hopeful tragedy of pursuing a new horizon.

If you want to read more about The Great Gatsby, check out this fantastic essay written by Jonathan Yardley for the Washington Post. It’s a wonderfully written analysis of what makes the novel so remarkable.

Here’a a trailer for the new Baz Luhrman film, in theaters Friday:

Check out Colbert’s plea to give Gatsby a chance below:

So, what do you think? Do you love The Great Gatsby? Do you hate it? Let us know in the comments!