An appreciation of the printed word (hopefully even printed on paper and bound together with a decorative cover) is a dying concept. We hope to, slowly but surely, rectify this tragic situation by introducing and discussing works, both fiction and nonfiction, modern and classic, that we feel warrant purchasing/ checking out from your local library. In other words, You Gotta Read This! This regular feature will be mainly spoiler-free. I will simply be providing a plot synopsis and the reasons this work warrants reading.

“Maybe instead of strings it’s stories things are made of, an infinite number of tiny, vibrating stories; once upon a time they were all part of one giant superstory, except it got broken up into a jillion different pieces, that’s why no story on its own makes any sense, and so what you have to do in a life is try and weave it back together, my story into your story, our stories into all the other people’s we know, until you’ve got something that to God or whoever might look like a letter or even a whole word…” 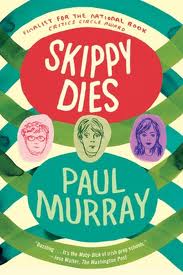 If you tell someone you want them to read a 600+ page novel about a teenage boy who dies in a donut shop, an Irish boys’ boarding school, and an obsession with quantum string theory, he’ll/ she’ll probably run in the opposite direction before you can tell how brutally funny, achingly poignant, and profoundly moving the novel is. When I read the novel’s final lines, I felt that rare, immensely satisfying feeling of sadness and loss. Not because the novel itself was gloomy and overwhelmingly bleak (although some of it certainly is), but because the novel had ended when I had wanted it to go on forever.

To tell you that Skippy, the novel’s titular character does not make it to the  novel’s resolution is hardly a spoiler (If it is, you should have read the title of this post). Plus, he dies during the novel’s opening chapter during a donut eating contest so intense his opponent, Ruprecht, does not even notice Skippy is turning blue.

Much of the novel’s remaining chapters involve flashbacks. We get to know Skippy through his school activities, interactions with this friends, his first girlfriend (earning the ire of her psychotic, bullying, drug-dealing former boyfriend), and the other, mundane events that make up his daily life. All the while, we remain aware that Skippy’s fate is to end up dead on a donut shop floor.

Then we have Ruprecht, the over-achieving, overweight, string theory obsessed teenager who takes on the “main character” label in the novel’s closing chapters. He emerges from the work as a phenomenally endearing, pitifully sad character that needs his best friend, Skippy to keep connected to the real world. He finds himself floundering and self-destructive after Skippy’s death.

When the novel’s plot shifts focus from the teenage students to their teachers, we enter a world of haunted pasts, backstabbing, marital affairs, and all-around questionable behavior. Their actions do not seem particularly dissimilar from the actions of the students. They are as entrenched in a state of perpetual adolescence. As the novel approaches its conclusion, the adults’ actions begin to have consequences on the lives of their students, leading to shocking revelations and an irony-riddled climax due to attempts to rectify/ escape past  mistakes.

The novel ends on an uncertain yet hopeful note, placing faith in the idea that if invisible strings connect every universal particle to one another, then there must be a way for human beings to join and remain bonded. With his second novel, Paul Murray creates a world in which everyone’s behavior affects everyone  else, which seems appropriate for a novel with as extreme a love for its characters as this novel has. It’s a brutal, painful, optimistic, sprawling epic upon which I cannot heap enough praise.

Skippy Dies is available ot purchase through Kindle or Nook and at your local bookstore!

So, what do you think? Have you read Skippy Dies? Are you a fan? Do you hate it? Let us know in the comments!