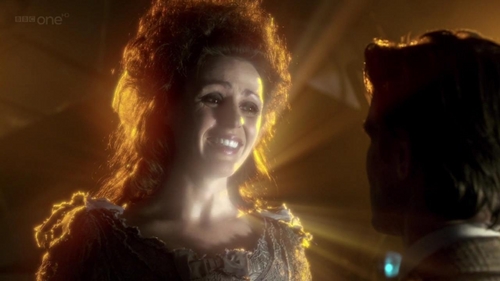 In less than an hour, Matt Smith, Steven Moffatt, and host Zoe Ball will introduce the next Doctor on Doctor Who in a live special simulcast in the U.K., U.S., Canada, and Australia.  This is the TV equivalent of the announcement of the new James Bond.  As such, this news is likely to briefly break the internet today, with Whovians of the world uniting to dissect this new person’s acting credits and most likely arguing about how they are absolutely wrong for the role.  So, what happens if the person who walks out from behind the proverbial curtain today as the 12th Doctor has two X chromosomes?  What if they’ve cast the first female ever to play the Doctor (well, first female outside of a one-off joke-y charity special or Big Finish audio adventure)?

In short, a minority of the fans would jump for joy while a majority would revolt on the grounds that the status quo is not to be disturbed.  This actress would easily become the most closely scrutinized Doctor in the show’s history, and if she ended up being not as good as David Tennant or Matt Smith (highly likely if the current quality of the writing on the show does not improve soon) she would likely become the first and only female to ever play the part.  No pressure, though.

However, is it strange that after 50 years a character who was partially created by a female (original producer Verity Lambert in 1963) and always has an eye-candy gal at his side hasn’t crossed that gender divide, especially now that we know he can (more on that in a minute)?  Is it sexist that the Doctor is always a male when the role doesn’t actually have to be, or is it perfectly okay for a role which has always been played a male to continue on that path?

The Argument for a Female Doctor

We Now Know for Sure That Time Lords Can Switch Genders 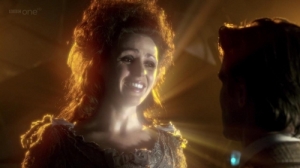 In Neil Gaiman’s beloved season 6 Doctor Who episode “The Doctor’s Wife,” the 11th Doctor  describes a former Time Lord acquaintance of his as having regenerated from a male body into a female body.  It’s a quick aside, delivered by Matt Smith with his signature flair for rapid line-delivery.  However, it is an incredibly significant moment which should not be forgotten as just another random, strange allusion to the Doctor’s past.  No, this is the moment which changed everything.  There was nothing telling us that Time Lords couldn’t switch gender via regeneration, but there was also nothing telling us they could.  The Doctor had always been a male, and any other Time Lords we’ve seen regenerate have remained the same gender (e.g., Rassilon, The Master always male; Romana always female).  But here it was from Neil Gaiman and approved by Steven Moffat – Time Lords can switch genders, and there was nothing in the way the Doctor discussed the matter which indicated this friend of his was abnormal among Time Lords for having gone female after male.

It’s been 50 years.  The Doctor can become a female.  It’s about dang time he did.  Plus, Doctor Who has long since suffered from charges of sexism, which have only grown louder since Steven Moffat replaced Russell T. Davies as Show Executive Producer/Head Writer.

A female hasn’t written an episode of Doctor Who since 2008, and a female hasn’t directed an episode since 2010.  Behind the scenes, things have been a little better with Beth Willis acting as Executive Producer alongside Steven Moffat and Piers Wenger from 2010 to 2011 and Caroline Skinner replacing her as Executive Producer from 2011 to the recently completed 7th season this year.  So, there usually is at least one female producing the show alongside Steven Moffat, but as far as choosing the words the characters say or being the eye behind the camera anyone with the ability to give birth need not apply.

However, Moffat has stated he views the show as actually being about the always-female companions and not the Doctor, since the former are meant to be dynamic entities and the latter static.  If so, wouldn’t they benefit from having a female point of view to better inform the creative direction for the companions if they are supposed to be the heart of the show?

This follows decades of sexism charges owing to the show’s long-standing tradition of having pretty, female companions constantly needing to be saved by the Doctor.  This dynamic improved greatly during the Russell T. Davies era in the form of bad-ass companions like Rose Tyler, Martha, and Donna Nobles who were actually the ones to save the day in at least one of their respective seasons finales.  Moffat’s female companions (Amelia Pond, Clara Oswald) are viewed as having regressed into one-note status with only occasional glimpses of complexity.

Having the Doctor switch genders would, of course, not actually address any of that.  If you believe Moffat does not write female characters well then having a female Doctor would only compound the problem.

Doctor Who thrives on creative re-birth.  When an actor has grown tired of playing the Doctor, rather sticking around and allowing the audience to sense their disinterest via the withering quality of their performance they simply move on.  The same is also true behind the scenes, where for the most part producers simply move on either as precautionary or reactionary to a sense of having become burnt out.  However, there is a sense that the show has in its most recent season entered into a creative decline, with inferior writing and storytelling and the initial promise displayed by the mystery of Clara Oswald and the related performance of Jenna Coleman in “The Snowmen” completely and utterly wasted.

Maybe this means that Moffat needs to move on, as Davies did before him.  However, maybe this just means the show is in desperate need of something new.  Clara “The Impossible Girl” Oswald was a device we’d already seen before – the companion who functions as the central mystery of a season.  It was Amelia “The Girl Who Waited” Pond combined with River Song – another mysterious female for the male Doctor to solve.  However, something legitimately new which would present genuine new story possibilities would be a female Doctor.

It could give the writers new territory to cover thematically.  Plus, rather than always being the accepted male authority figure when he walks into a room regardless of historical era the Doctor could have to face prejudices which are directed directly at him rather than doing so as an god-like, third-party observer.  Much as Martha’s race had to be explained when traveling with the Doctor back in time to Shakespearean England, the Doctor as a female could dictate where he could go and how others would respond to him.

The Argument Against a Female Doctor

The Majority of Fans Don’t Want it

Various websites have conducted polls to gauge fan reaction the possibility of a female actress playing the Doctor.  Nearly 60% of respondents to the poll at Digital Spy selected the “No-The Doctor could never be a woman” option; NewGov.co.uk found that over half of respondents (52%) wanted the Doctor to be male, with 55% of male respondents indicating as much and 49% of female respondents.  There is also an anecdotal story that Steven Moffat conducted a non-scientific, “show of hands” poll at a convention in Cardiff in which a packed auditorium of Doctor Who fans were asked to raise their hands to indicate openness to a female Doctor.  Nearly a quarter of fans apparently raised their hands when asked if they would stop watching the show entirely if the Doctor was to be made a female. 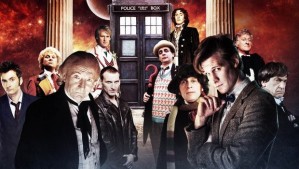 The “that’s the way it’s always been” argument feels inherently prejudiced.  It feels small-minded and on the wrong-side of history.  Of course, that’s because it is the defense usually used in far larger, more important social issues involving racism or homophobia.  We are only talking about a TV show here.

However, the Doctor has always been a man.  That’s just who he is.  It wouldn’t seem like the same show if he were a female.  He has always been this trailblazing hero in the sci-fi realm who champions logic and scientific reasoning over combat or more traditional male posturing.  It’s not an issue of gender superiority, i.e., a perception that a female Doctor would be weaker than a male one.  It’s an issue of permanence and perception – the Doctor has always been one thing and will always be one thing, and the notion of that changing via a gender switch is just wrong. There is sort of a Seinfeld-esque posturing “not that there’s anything wrong with that” defense where one must make it perfectly clear they think women are awesome.  They just also think the Doctor is awesome, and it’s not that he’s awesome because he’s a man.  It’s more that he just so happens to be a man because that who the Doctor is.

He has been a hero to many a young boy for decades.  While it is true that young girls can use as many female heroes as possible, should it come at the expense of Doctor Who?

Of course, this is probably all a mere academic exercise at this point.  According to this Tweet from earlier today, it appears as if the 12th Doctor will be a male.  Doctor Who fans may not collectively know what to do with that, but the majority are probably happy.