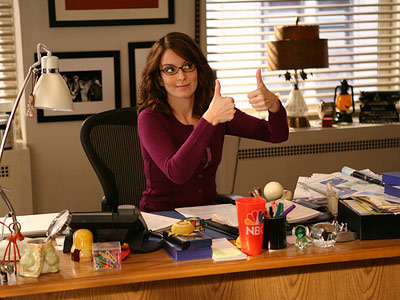 Tina Fey officially had a better week than you did this past week.

Early in the week, a sitcom she is producing with her old 30 Rock co-showrunner Robert Carlock was sold to NBC.  The untitled project is the brainchild of 30 Rock writer-producer Colleen McGuinnes, and according to The Hollywood Reporter it “is a workplace comedy in which a woman reconnects with her estranged father and finds a new home and family on Fire Island.”  It is unclear how involved Fey will be with the project, and it has no guarantee of ever hitting the air as being sold to NBC is merely an early but crucial step in the development process.  They can now go make a pilot.

However, that’s old news now.  There was a bidding war among the networks for a separate Fey/Carlock project, and on Friday Fox won by offering to skip the pilot process altogether and grant a straight-to-series order, ala what NBC had to do to win the bidding war for the Michael J. Fox comedy last year.  The also-untitled project will detail a traditionally all-female college accepting male students for the first time.  So, imagine the hilarity that will ensue when they discover they’ve had a Bosom Buddies situation going on right under their noses this whole time, with multiple female students revealed to be males in drag.  Those Buddies will then be super pissed when the college opens its doors to male students, probably delivering a indignant, Tom Hanks-style, “Well, now you do it!”  This project also includes former 30 Rock writer-producer and Ed and Joey writer Matt Hubbard, who will likely marathon Bosom Buddies before sitting down to write the script for the pilot.

Tina Fey fans should likely temper their enthusiasm, though.  There’s no indication at the moment that she will actually star in either show.  She will serve as an Executive Producer for both, a credit we’ve previously explained can sometimes mean next to nothing in relation to the day-to-day running of a show or film.  Plus, the project about the newly integrated college will be a traditional multi-camera sitcom, i.e., not at all like the single-camera 30 Rock.

This is all simply the by-product of the four-year development deal she signed with Universal Television last September, with the studio wisely signing her up to keep her future TV projects in-house before she concluded her award-winning run on 30 Rock.  Granted, her bankability as a film star is certainly in question after this year’s Admission failed to impress with a final gross of $18 million on a $13 million budget.  Plus, as much as people love themselves some 30 Rock it’s not as if it was ever a huge ratings winner.  However, Tina Fey at this point is a brand unto itself that brings with it the promise of certain level of quality meaning neither of these shows should outright suck.  Right?  Well, if they add Alec Baldwin to either that would seem to guarantee hilarious results (and various unfortunate PR-disaster distractions from his personal life).

So, we’ve got a workplace comedy on Fire Island and a comedy centered around a newly integrated former woman’s college?  Which ones should 30 Rock stars Tracy Morgan, Jane Krakowski, Judah Friedlander, Jack McBryar, and Kristen Schaal end up in?  And will there be any way they can use either show to constantly make fun of their corporate overlord, ala the continual takedowns of NBC, G.E., and Comcast on 30 Rock?