It seems like it has been a while since we’ve had a truly classic Christmas movie, though not necessarily for a lack of trying.  Earlier this month we had Black Nativity and last year we had the animated film Arthur Christmas.  A couple of years back there was the Vince Vaughn groaner Fred Claus (2007).  There are those who swear by The Family Stone (2005), tacked-on cancer storyline and all.  However, the two most Christmas films which seemed to have lasted and morphed into modern classic status are Elf and Love Actually, both of which came out in 2003.  In a recent Radios Times poll, over 2,000 surveyed Brits ranked It’s a Wonderful Life, Love Actually, Elf, The Muppet Christmas Carol, and Home Alone as their favorite Christmas movies of all time.

So, we decided to head over to the trivia sections for each film at IMDB, and look up not only some things you may not know about each film but also things we didn’t know either.  We added in a couple of our own favorites as well.

1) Jean Shepherd‘s book “In God We Trust: All Others Pay Cash”, which the film is partly based on, is a collection of short stories that Shepherd wrote for “Playboy” magazine during the 1960s, including the ones about the tongue sticking to the flagpole and eating Christmas dinner at a Chinese restaurant. The subplot of the mangy dogs constantly harassing The Old Man was taken from another of Shepherd’s short story collections, “Wanda Hickey’s Night Of Golden Memories and Other Disasters.” In that book, the character of Ralph is about 17 years old.

2) The piece of music that plays after Ralphie says “fudge”, and after the lamp breaks for the second time, is the opening of “Hamlet” by Pyotr Ilyich Tchaikovsky.

3) Although now the film is considered a Christmas classic, at the time–according to Peter Billingsley–not many major studios were interested in a Depression-era story about a little boy wanting a BB gun for Christmas. Billingsley also stated in an interview that director Bob Clark had to agree to make a horror film for the studio in order to get “A Christas Story” made.

4) Scheduling conflicts with another film forced Chevy Chase to turn down the role of Scott Calvin/Santa Claus.

5) In older releases of the film, Tim Allen made a sarcastic remark in the movie, which included the line “1-800-SPANK-ME.” During the film’s release, a woman from near Cleveland, Ohio called the supposedly-fictional number for her curious grandchildren; it turned out to be a phone sex line. However, it wasn’t until 1997, when Disney received complaints from parents whose children called the number and racked up huge phone bills, did the studio take action and cut the line for future releases. Disney also said that they would purchase the phone number to disconnect the service.

6) The movie is based on John Hughes‘ short story “Christmas ’59”, the second Vacation story to be published in National Lampoon’s Magazine (the first was “Vacation ’58”, which was the basis for the first Vacation movie). The Christmas story was printed in December 1980. The label on the home movie reel that Clark finds in the attic is labeled “Xmas ’59,” a further allusion.

7) When shopping with Clark Eddie asks Clark if it was his company that “killed all those people in India”. He is referencing the Bhopal disaster, also known as the Union Carbide disaster in which leaks from a Union Carbide pesticide plant escaped into the air. Thousands of people died and many more were sickened.

8) The scene where the cat bites on the Christmas lights cord and gets electrocuted was nearly cut from the movie. Prior to the first test screening. the studio execs wanted the scene taken out, fearing that it might offend some viewers, but producer Matty Simmonsbegged them to leave the scene in, and they eventually gave in to his request. After the first test screening, the test audience had scored the cat electrocution scene as the No. 1 favorite scene throughout the entire movie.

9) The concept for this movie originated during the filming of a scene in Uncle Buck (1989) in which Macaulay Culkin plays a character who interrogates a would-be-babysitter through a letterbox.

10) John Candy filmed his part in only one day, albeit an extremely long 23-hour day. The story about having once forgotten his son at a funeral home was entirely improvised. His part is obviously inspired by the character he played in Planes, Trains & Automobiles(1987) also written by John Hughes.

11) The line “You guys give up, or are you thirsty for more?” was improvised.

12) The movie that Kevin watches on video tape is not a real film, but footage specially created. It was called “Angels With Filthy Souls.” Along with other similar era references in the movie, this is a play upon the movie Angels with Dirty Faces (1938) starring James Cagney.

13) The movie is considered a traditional Christmas movie in Poland. It has aired on national TV during prime time Christmas season every year since 1990. In 2011 the movie aired on December 23rd with an audience of over 5 million, making it the most popular show aired during the Christmas season in Poland. One of the reasons for this is because the movie was one of the first western productions aired in Poland after the fall of communism.

14)   This was the first major Muppet project after the death of creator Jim Henson. Henson had performed Kermit the Frog and the role was now being handed down to Steve Whitmire. According to Whitmire he was incredibly nervous about taking over such an iconic character. The night before he had to go record Kermit’s songs for the movie, he had a dream where he met Henson in a hotel lobby and told him how unsure he was. In the dream, Henson reassured Whitmire that the feeling would pass. After waking up, Whitmire was confident and able to do the part.

15)   There are two more songs that are on the soundtrack but aren’t in the movie at all. One is “Room in Your Heart”, sung by Dr. Honeydew and Beaker as the charity workers. The other is “Chairman of the Board”, sung by Sam the Eagle as Scrooge’s headmaster. Both were recorded, but dropped from the script before filming started to help the flow of the story.

16) When this screenplay first emerged in 1993, Jim Carrey was attached to star in the lead.

17) Buddy’s 12-second belch was supplied by voice actor Maurice LaMarche, best-known for his cartoon character, “The Brain”, from Pinky and the Brain (1995), and who also did the operatic belching in Animaniacs (1993) as “The Great Wakarotti”. 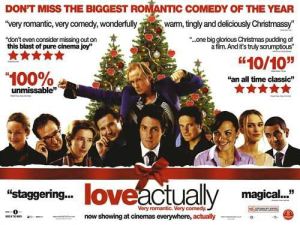 19) The airport greeting footage at the beginning and end of the film is real. Richard Curtishad a team of cameramen film at Heathrow airport for a week, and whenever they saw something that would fit in they asked the people involved for permission to use the footage.

20) According to Richard Curtis they had to put Emma Thompson in a “fat suit” to make her appear heavier because she is actually a very thin woman.

21) The lake that Lúcia Moniz and Colin Firth are “swimming” in was actually only eighteen inches deep and they had to kneel down and pretend to be in deeper water. It was also over-run by mosquitoes and Colin Firth was badly bitten and his elbow swelled up to the size of an avocado, requiring medical attention.

22) The idea for Mark’s surprise of the band singing “All You Need Is Love” at Peter and Juliet’s wedding came from Jim Henson‘s funeral (which Richard Curtis attended) where all the puppeteers brought their Muppets and sung a song.

23) For the scene that required Donna Reed to throw a rock into the window of the Granville House, Frank Capra hired a marksman to shoot it out for her on cue. To everyone’s amazement, Donna Reed broke the window with true aim and heft without the assistance of the hired marksman. Reed had played baseball in high school and had a strong throwing arm

24) The set for Bedford Falls was constructed in two months and was one of the longest sets that had ever been made for an American movie. It covered four acres of the RKO’s Encino Ranch. It included 75 stores and buildings, main street, factory district and a large residential and slum area. The Main Street was 300 yards long, three whole city blocks!

25) Films made prior to this one used cornflakes painted white for the falling snow effect. Because the cornflakes were so loud, dialogue had to be dubbed in later. Frank Caprawanted to record the sound live, so a new snow effect was developed using foamite (a fire-fighting chemical) and soap and water. This mixture was then pumped at high pressure through a wind machine to create the silent, falling snow. 6000 gallons of the new snow were used in the film. The RKO Effects Department received a Class III Scientific or Technical Award from the Motion Picture Academy for the development of the new film snow.

Quick note: IMDB is a user-driven site much like Wikipedia.org meaning all of the above trivia items were likely submitted by users of the site.