To some, Christmas means escaping back into tales of a department store Santa (Miracle on 34th Street), a modern exploration of the many facets of love (Love Actually), a vacation gone horribly wrong (Christmas Vacation) or one of the many iterations of Charles Dickens’ A Christmas Carol (A Muppet Christmas Carol, Scrooged, etc.). However, the realm of animated television offers typically more sinister approaches, such as an episode of American Dad in which the family accidentally kills Santa Claus who then regenerates and seeks out his vengeance like the killer of I Know What You Did Last Summer. Plus, a super-intelligent, power-hungry talking mouse and his dim-witted, sweet-natured sidekick (Pinky & The Brain) can actually kind of break your heart. The point being, animated TV shows are unburdened by reality or the need to establish character meaning that an often over-looked source of holiday entertainment are holiday episodes of TV shows like The Simpsons and South Park.

In honor of this, here are 10 amazing Christmas episodes of animated TV shows.  Of course, just because they’re animated does not mean they can be enjoyed by the entire family. In no case is that more obvious than our pick for #10:

Why It’s Awesome: Did I mention the blood orgy? To some, “Woodland Critter Christmas” might actually be too twisted, even by South Park standards.  As such, it is certainly a risky proposition to view it in mixed company. However, like many of the best efforts from the guys at South Park its tale hooks you with the familiar before expanding the weirdness exponentially with each subsequent scene. They resist their natural tendency to wag their finger at sincerity or a hot button issue through blunt imagery, but instead give us exactly what a Christmas fairy tale would look like if coming from the twisted, sadistic mind of Eric Cartman. 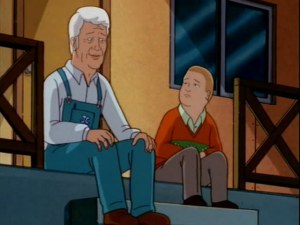 What It’s About: Hank is roped into doing most of his boss’ work in building a Habitat for Humanity house for his community service.  When he is subsequently promoted to the position as manager at his job, he is uncharacteristically overcome with emotion and welcomes the news by declaring that he loves his boss.  Made instantly uncomfortable by such an expression, his boss immediately demotes him, but his expression of love for a surrogate father figure angers his actual father, the forever irascible Cotton. They attempt to make amends over a family dinner shared with the family now living in the Habitat for Humanity home, but tempers boil over to the point of Cotton forcing everyone out of the house and refusing to allow re-admittance. This leaves noted philanthropist and peace negotiator J.C. (Jimmy Carter) to attempt to broker a truce between the two.

Why It’s Awesome: Regardless of whatever you might think of the merits of Jimmy Carter’s presidency, the notion of him appearing as a peacemaker in this episode only to then become the common enemy is remarkably amusing. Both proud Texas men Hank and Cotton are only reunited by their lack of respect for “one-termer” Jimmy Carter. Plus, Hank’s son Bobby thinks Jimmy Carter is Jesus, seeing as how his initials are J.C. and he’s a carpenter.  If that’s not inherently funny to you then this list I’m writing here is probably not for you. 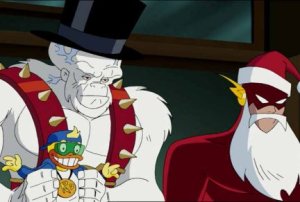 What It’s About: The Justice League go their separate ways to celebrate the holiday season. Clark Kent and J’onn “Martian Manhunter” J’onnz visit Smallville for a Kent family Christmas while Green Lantern (who is from Earth) and Hawkgirl (who is from an alien planet) compare holiday traditions through snowball fights and alien bar brawls.  Meanwhile, The Flash and villain Ultra-Humanite negotiate a truce to help save a wanted toy for a group of orphans.

Why It’s Awesome: This is perhaps the least cynical, most unabashedly warm-hearted episode on this list. However, there is an enjoyable sweetness to its three tales, with J’onn and Hawkgirl in their respective stories standing in for the outsider party who may not celebrate or understand Christmas as literal beings from different planets. 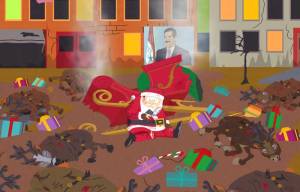 What It’s About: In an effort to redeem himself days before Christmas, Cartman decides to bring Christmas to the Iraqis. That goes about as poorly as expected, evolving into an inspired send-up of Black Hawk Down featuring Santa Claus shot down, captured, and tortured by Iraqis. It’s up to Stan, Kyle, Kenny, and Cartman to recruit the help of a gun-toting Jesus to rescue Santa.

Why It’s Awesome: With each passing year, “Red Sleigh Down” loses some of its comedic power. However, at the times of its initial airing in December 2002 it hit almost too close to home, as America was engaged in an ultimately ill-fated war with Iraq and Afghanistan.  The commentary of the episode concerning the ignorance of attempting to transport your own culture (represented here by Christmas) to a culture you don’t understand (Iraq) might be too sledge-hammer for some. However, why get bogged down in such deeper analysis when the imagery on screen is so off-the-wall insane and (hopefully) hilarious, particularly Santa killing of his torturer and explaining afterward, “I just couldn’t do it, Jesus. I just couldn’t let him live. He shocked Santa’s balls.”

What It’s About: For as maniacal, super-intelligent, and matricidal as he may be, Stewie Griffin still believes in Santa Claus. When his eyes are opened to the charade of mall store Santas, he takes this as a cue for a signature Brian and Stewie road trip episode. Their destination is the North Pole, where Stewie plans to have words with the real Santa, while Brian goes along to keep Stewie safe.

Why It’s Awesome: There are perhaps one too many Seth MacFarlane indulgences in this episode, such as the live-action narration from MacFarlane’s apparent, Wilfred Brimley-esque father and an extended sequence involving Stewie and Brian being such inept fill-ins for Santa that they almost kill an entire family. However, there are multiple hilarious songs spread throughout, including a Broadway-fantastic number from Santa and his mutant elfs with the catchy refrain of “It’s killing us!” in reference to the toll of having to create so many gifts. Although sincerity is not Family Guy’s strong suit, the conclusion the episode reaches about limiting the materialism of the holidays and embracing quality vs. quantity is surprisingly earned and effective. Be warned, though: do not watch this on Netflix and expect all of the foul language to be bleeped out the way it is on air! 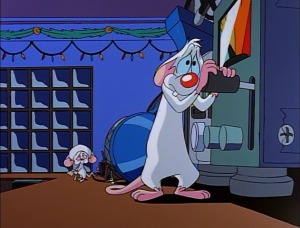 What It’s About: Pinky and the Brain head to the North Pole as part of the Brain’s latest plot to take over the world. Brain wants to pretend to be an elf so that he can mass produce a hypnotic doll named “Noddle Noggin” in Santa’s workshop. This hypnotic doll will then be distributed worldwide by unwitting Santa, with everyone worldwide converted into follower’s of the Brain once they open the present. Pinky, on the other hand, merely wants to go to the North Pole to meet Santa to deliver his Christmas wishlist to him in person.

Why It’s Awesome: Pinky & The Brain is your classic case of a show which pleases adults as much as it does children, with the adults laughing at random pop culture references and satirical commentary and children laughing every time the Brain hits Pinky over the head. This Emmy-winning episode is no different, as it includes commentary on the commercialism of Christmas along with funny basic imagery like Pinky and the Brain posing as reindeer.  However, the true power lies in its heart-warming finale, brilliantly performed by voice actors Maurice LaMarche (Brain) and Rob Paulson (Pinky). 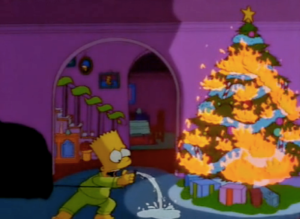 What It’s About: After accidentally ruining the family’s Christmas tree and presents, Bart buries the evidence and claims a burglar stole everything. When newscaster Kent Brockman does a human interest story on the family’s tragic loss, the townspeople shower them with gifts.

So, it’s basically a touching update of It’s a Wonderful Life, at least with the townspeople gathering together to prop up the protagonist part, right? Yeah, then the actual truth comes out and that helpful crowd turns into an angry mob.

Why It’s Awesome: It hits familiar themes, and the fun, inverted It’s a Wonderful Life ending is clever, though not necessarily ingenious. However, it’s awesome because it is The Simpsons in its prime, meaning there is nary a wasted joke during the whole thing. It’s the little things that stick out, such as young Bart innocently thinking the water hose from the kitchen sink would extend far enough to put out the fire on the Christmas tree.

What It’s About: In the future, Christmas is not a time to rejoice, as Santa Claus has now become a robot who instead of delivering coal to the naughty instead delivers a quick, but painful death. So, of course, on Christmas eve the Planet Express delivery crew has a mission to Robot Santa’s colony on Neptune, but through an accident, they actually trap the sadistic robot in ice. Through a hilarious song and dance number, Fry, Leela, and Bender quickly become the Neptunians new cruel overlords, working their slave labor into shape and making adequate toys for Christmas. Bender steps in as Santa, but his efforts to deliver presents like the traditional Santa are met with hostility by a people more accustomed to having to defend themselves from the murderous Robot version.

Why It’s Awesome: Many Christmas stories end with a re-affirmation of the family unit or community, cutting through the commercial appeal of presents and arguing for the way in which an event like Christmas gathers us together for the better. Futurama’s approach to this is to present a future in which we are actually forced together at Christmas out of fear of a robot santa who will kill us, a fun, sci-fi twist on the more sinister iterations of the Santa Claus figure across cultures and throughout history before Coca-Cola got to him.

What It’s About: Despite Francine’s warning, Stan gives Steve a gun for Christmas.  Of course, Steve accidentally shoots Santa, and the family buries his body.  Once Santa re-generates, he comes back to hunt the family down like I Know What You Did Last Summer.

Why It’s Awesome: Santa as a slasher killer. Enough said. Many Christmas stories re-affirm the ability of the holidays to connect us. In this iteration, the family of American Dad is united by the holidays but only because they are engaged in mortal combat with a Patton-esque Santa Claus.

What It’s About: Worked into a consumer-frenzy by incessant advertising, Bart becomes obsessed with obtaining the latest hot video game. Unwilling to wait, he simply steals it but is captured in his ill-fated attempt at shoplifting. He manages to keep his capture secret from the family until it’s time to have the family Christmas photo taken at the Try-N-Save.

Why It’s Awesome: What “Marge Be Not Proud” beautifully explores is the moment when mother and son jointly realize the latter is no longer a kid anymore, as framed perfectly with the quest for a desired Christmas toy (or game, in this case). Plus, again, this is The Simpsons during its golden age, every episode chock-full of forever quotable bits, such as the way Homer says “Git him, ma” as encouragement while Marge chases after Bart in this episode. It touchingly concludes by having Bart regain his mother’s affection through a selfless act.

Honorable Mentions: The Phineas & Ferb Christmas special, the Aqua Teen Hunger Force episode with the robot ghost from the past, the Simpsons first ever episode in which they get Santa’s Little Helper, and even the Beavis & Butthead Christmas special.

Are you a fan of these picks, or are there other episodes you think should have made the cut? Let me know in the comments.