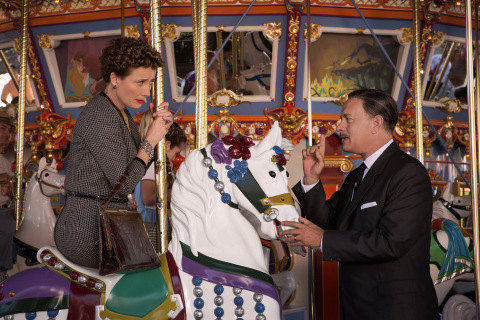 NOTE: There will be plenty of spoilers for Saving Mr. Banks in the below article.  You’ve been warned.

In Saving Mr. Banks, Tom Hanks stars as Walt Disney and Emma Thomson as P.L. Travers, the author of the Mary Poppins children’s book which was originally published in 1934.  The basic story is that in the early 1960s Disney wanted to do, well, the Disney thing with the book and turn it into a live action film featuring nonsensical songs the masses would involuntarily hum as they left the theaters.  Travers, on the other hand, held the intellectual property rights meaning everything had to first go through her before the movie could happen, and she was most certainly not a mouse ears-wearing member of the Mickey Mouse Club.  Disney was ever so Disney about it (“But Pamela, think about the children”), and Travers was ever so British about it (“Oh, poppycock, and don’t you dare ever again begin a sentence with a conjunction around me!  Plus, what have I told you about referring to me by my first name.  You know full well you are to call me Ms. Travers or Ms. or nothing at all”).

If you have yet to see the movie, just watch the trailer and imagine a couple more flashbacks with Colin Farrell as Travers’ father in Australia and you’ve pretty much seen the movie, right down to the final scene between Disney and Travers when the former finally wears down the latter.

The film is of sufficient merit to have received generally favorable critical reviews (81% fresh rating on RottenTomatoes), even if noted critic David Edelstein recently listed it as one of the worst films of 2013.  It has a tentative seat at the table among awards contenders, although perhaps only a contender for an acting nomination or two (the Golden Globes gave it one nomination: Best Actress for Emma Thompson).  At the box office, it opened a bit softer than expected before surging nearly 50% over Christmas.  It now has a total domestic/worldwide gross of $40 million/$45 million, which is but a drop in the wide ocean that is Disney’s financial empire but still not bad after two weeks of wide release for a film which cost $35 million to make.  Audiences (at least opening night audiences) appear to like it, grading it as an A on CinemaScore’s A-F scale.

So, where’s the problem?  Well, for some – like David Edelstein – the spoonful of sentimental sugar that is the film’s surface simply distracts from the harder-to-swallow medicine of clear Disney propaganda.  This is, after all, a Disney produced film about the making of a classic Disney film-Mary Poppins-which, not coincidentally, is reaching its 50th anniversary just in time for an anniversary Blu-Ray release to be pushed during the holidays.  Of course-the argument goes-the story told will present P.L. Travers as the villain of the piece to Walt Disney’s ever avuncular hero.  It is not in Disney’s best corporate interests to tell a story which makes them look bad.  Plus, the audience comes to the film presumably with an awareness and possibly affinity for Mary Poppins, which BBC film critic Mark Kermode has repeatedly praised as being a perfect film.  Saving Mr. Banks is not the story of how that amazing film got made, but instead of the mean British woman who almost stopped it from happening but had her cold heart at least partially thawed by the unique charms of Walt Disney and the Disney machine.

This line of criticism is neither unexpected nor is it completely invalid.  However, it might sell Saving Mr. Banks a bit short.  There are certain factual realities of Walt Disney the person as well as long-standing criticisms of the Disney corporation that do not go unacknowledged.  There are also certain unflattering things which go notably unmentioned.

One could argue that this all paints a more interesting story than Saving Mr. Banks is actually willing to tell.  However, if one should so desire a more even-handed approach to the story there are multiple documentaries on the subject (The Real Mary Poppins, The Shadow Of Mary Poppins) as well as an extensive biography (Mary Poppins She Wrote).

Does any of this actually make Saving Mr. Banks a bad movie?  No.  There is always going to be issues of dramatic license with stories based upon actual events, and as articulately argued by FilmSchoolRejects there is something even more discomforting than normal here:

In other word, in life Disney screwed Travers over (even if she profited from it financially), and now in death he has done so again.  However, the arguments Saving Mr. Banks makes about Travers’ personal tragedy which led to the creation of Mary Poppins to begin with is by most accounts factually accurate and powerful dramatic material.  Saving Mr. Banks is at times too schmaltzy, but it is a perfectly fine film, thinly drawn at first before it reveals more about the principal players – Travers and Disney.  It cleverly utilizes an entirely fictional limousine driver (Paul Giamatti) as a way of making Travers more sympathetic.

However, such historical adaptations are rarely ever so nakedly self-serving – a Disney film about a Disney story.  That formula is far too nauseating for some to bare, as is the way Saving Mr. Banks acknowledges unsympathetic facts and criticisms before spinning them into Disney-friendly positives.  Vaguely similar criticisms were made earlier this year of The Internship, e.g., it’s just a giant commercial for Google.  However, The Internship isn’t a bad movie because of its Google connections but instead because it’s simply not that funny.  Is it possible to judge Saving Mr. Banks on its own merits as a movie?

Over the end credits of Saving Mr. Banks, a tape plays uninterrupted that depicts real audio of Travers’ recorded script negotiations. It’s an enticing gesture of transparency, a symbolic opening of the tightly regulated Disney vaults. Yet this, like the cigarette moment, encapsulates something essential about Saving Mr. Banks‘ careful tango with history: it’s a friendly nod at open dialogue and self-evaluation, but one that’s only interested in a conversation in which the terms have already been set.

They’re not wrong.  However, does that mean you can’t enjoy Saving Mr. Banks?  And are we really that surprised that the spin goes Disney’s way instead of Travers;?

What do you think?  Just because a film project has a corporate agenda inherently weakens its merits?  Has no effect?  Let us know what you think in the comments section.