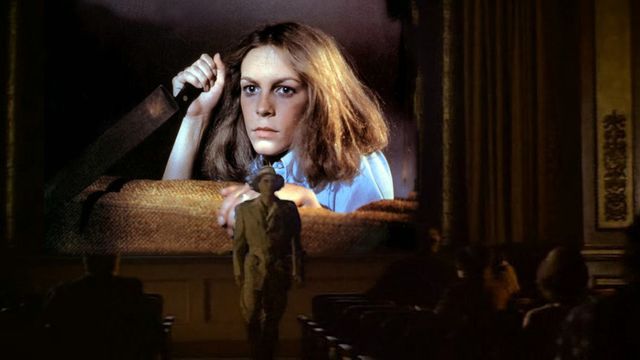 Have you ever watched Pleasantville and thought, “Wouldn’t it be cool if someone did this same plot but instead of a 1950s TV show the characters were actually sucked into a slasher horror film?”  Well, screenwriters M.A. Fortin and Joshua John Mill sure thought so, using that basic premise for their screenplay Final Girls, which has been in development hell since 2011.  Now, just like a presumed-to-be-dead slasher villain inexplicably returning for yet another sequel, Final Girls is back from the dead.  According to ScreenDaily, Sony bought the worldwide rights to the project, which will be directed by Todd Strauss-Schulson (A Very Harold & Kuma Christmas) and star Malin Akerman (Watchmen, Children’s Hospital, Trophy Wife) and Taissa Farmiga (American Horror Story).  They start filming in Louisiana in April.

The AV Club’s plot synopsis hints at more than mere Pleasantville-mimicry.  No, there’s also a mother-daughter bond as the emotional through-line of the story:

“The Final Girls will be about a grieving teenager who gets sucked into a slasher movie made in the ’80s. While there, she’s reunited with her dead mother, the star of the movie, and the two renew their relationship while trying to outrun the film’s maniacal killer.”

Strauss-Schulson makes it clear he’s seen all of the movies you might compare Final Girls to based on its premise, describing it as follows:

“It’s Pleasantville in a trashy horror movie from the ’80s with a little Back To The Future thrown in and a spoon full of Terms Of Endearment with a dash of Scream and two dollops of Purple Rose Of Cairo for good measure.”

He left out, probably because they aren’t particular well-remembered, Stay Tuned (1992) and Last Action Hero (1993), the former starring John Ritter as a TV addict sucked into his own TV with his wife and the latter infamously dropping a real world kid into the fictional universe of a stereotypical Arnold Schwarzenegger action movie.  It’s interesting that he would bring up Woody Allen’s classic Purple Rose of Cairo, though, in which a character literally walks off the movie screen and into the audience to romance Mia Farrow’s character.  This could indicate Final Girls will pull a Last Action Hero on us and have the fictional people from the movie escape into the real world around the halfway mark:

Or it could simply mean the characters in the slasher film will be as self-aware as Jeff Daniels’ character was in Purple Rose of Cairo.

That does bring us to our primary source of confusion with the premise of Final Girls.  So, clearly Farmiga will be the grieving young girl pulled into the ’80s slasher film starring a younger version of her mother, presumably Malin Akerman’s character.  That would be like Jamie Lee Curtis’ hypothetical daughter getting pulled into the first Halloween (1978).  However, in the Pleasantville/Last Action Hero model she would be uniting with Laurie Strode, a fictional character who just happens to look a lot like her mom and doesn’t realize she’s a fictional character.  They mention Back to the Future as a reference point, but at least there Marty met his actual parents, albeit in teenage form, not fictional characters who looked like young versions of his parents.

Either way, Final Girls certainly sounds intriguing.  Post-Scream around here we prefer our slasher films self-aware (Tucker & Dale Vs. Evil, Cabin in the Woods) as opposed to doubling down on the grit, grime, and gore (the remakes of Texas Chainsaw Massacre, Friday the 13th, Nightmare on Elm Street).  Here’s hoping Farmiga’s character will have read Seth Grahame-Smith’s How to Survive a Horror Movie, specifically the chapter on slasher films.  For example, if their villain is the strong, silent type (e.g., Jason, Michael Myers):

“You can’t outrun them, and you certainly can’t take them on, but you can capitalize on their Achilles heel: one-dimensional thinking.  Lure them in with traps, possibly using humans as bait, and once you’ve got them there are two ways to keep them silent: 1) Burn them until their reduced to ash, mix that ash into wet cement, and use that cement to build a children’s hospital, or 2) crush them in a hydraulic press, put the remains through the wood chipper 3 times, and feed the shreds to puppies.”

If their villain is the wisecracking type (e.g., Freddy Kreuger):

“Play to their insecurities.  Ask them why they feel the need to make all those jokes.  Is it because they never got enough action growing up?  Are they afraid no one will like them unless they’re constantly entertaining?  Could this be why they feel the need to kill teenagers?  The same teens that made fun of them all those years ago?  Don’t they see that by killing they’re just feeding into a vicious cycle of isolationism?  If that doesn’t work, just keep repeating these 4 magic words, ‘I don’t get it.’  If their jokes aren’t understood the killing brings them no joy.”

Also, when searching for tools to be used to fight back they should avoid shovels because those just give the screenwriter easy excuse for “digging their own grave” jokes.

What do you think – does Final Girls sound intriguing?  Is the only way to do a slasher film now with a healthy dose of meta?  Just hope Jamie Lee Curtis can cameo as a grandmother? Let us know in the comments.