To read our other Agents of SHIELD episode reviews please go here.

We pick up almost directly after the events of “T.R.A.I.N.S.” The team takes shot-twice-in-the-gut Skye to a SHIELD facility only to discover there’s nothing that can be done to save her.  It’s time to say goodbye to the littler hacker that couldn’t.  May takes her anger out on Quinn’s face in the Bus’ interrogation room, but Coulson’s all, “Remember – I was dead for 7 days, and they brought me back.  Saving Skye should be nothing for the SHIELD doctors who did that.”  Everyone other than May, though, has a quick, “Wait, what?” because Coulson hadn’t told any of them the truth about his recovery.  So, he tells them (they take it better than he did when he first found out), gives Fitz and Simmons his medical files, and we’re off on an adventure.

One problem.  SHIELD ordered them to hand over Quinn, but Coulson wants him around to be thrown off the plane to a splattery death should Skye not make it.  The team SHIELD sends to board the Bus and apprehend Quinn is headed by old buddy Agent John Garrett (Bill Paxton), who also happens to be Ward’s former commanding officer.  Garrett brings his own version of Ward with him, Anton Triplett (B.J. Britt).  After brief fisticuffs, it’s decided Garrett will interrogate Quinn on the Bus.  He’s the type who may just pull Quinn’s tongue out of his mouth if he doesn’t cooperate.

Turns out the Clairvoyant told Quinn to shoot Skye because that would force Coulson to save her the way SHIELD had saved him, which is a secret the Clairvoyant is desperate to discover.  Moreover, Coulson’s medical files are a bunch of bunk.  He was actually saved in some off the books SHIELD facility simply called Guest House.  Fitz and Simmons identify the location, mostly because SHIELD was stupid enough to use the initials of the secret facility (G.H.) as the pre-fix to their all-important secret drug.

After disposing of the two guards of the otherwise abandoned Guest House, Coulson, Garrett, Ward, and Fitz find the miracle drug, and save Skye.  However, the Guest House goes boom in the process due to booby-trapped dynamited, burying all of its secret.  Before that happens, Coulson managed some alone time where he discovered a room marked T.A.H.I.T.I. wherein the secret drugs were all being generated from Dr. Manhattan’s severed Torso.

The pre-credits stinger introduces an Asgardian woman who has some kind of mind-control power over men, stealing away a newlywed and his kickin’ convertible, leaving his poor, confused wife back behind.  The Asgardian woman’s name?   Lorelei.  If you know your Thor comics that name might actually mean something to you.

Ever since the calender turned over to 2014, SHIELD has gone into show reboot mode, partially resolving Coulson and Skye’s respective season-long mysteries in their first (“The Magical Place”) and second (“Seeds”) episodes back from break.  Then, borrowing a page from Arrow, they started integrating some more significant actual comic book characters, such as revealing Mike Peterson’s arc this whole time was to evolve into a new version of the villain Deathlock.  “T.A.H.I.T.I.” somewhat continues this trend with Agent Garrett and Lorelei, although I don’t get the sense those two are nearly as prominent in the comics as Deathlock.  They’ve also used this time to advance the Ward-May romance, and cliffhanged Skye’s potential (though obviously bogus) death.

Now, the show has taken things to the next level, official re-branding itself in advertising as Agents of SHIELD: Uprising, and promising (as ABC also did with “T.R.A.C.K.S.”) a “show-changing event.”  They’re also finally starting their tie-in to the upcoming Captain America movie, featuring Cap’s signature shield in place of the standard SHIELD logo in the below graphic running at the end of the Uprising trailers: 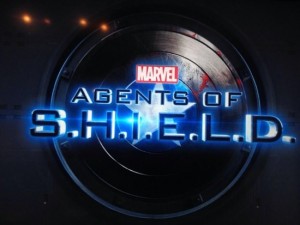 However, it’s really more like with “TAHITI” and next weeks’ episode they’ve called a mulligan on two of their poorly received earlier episodes.  If you didn’t like the stupid ass explanation they gave for Coulson’s survival in “The Magical Place” then hopefully “TAHITI” was, like, way cooler with how it said instead of Bethesda it was actually a place called Guest House that Coulson was at, and there was some secret drug derived from an alien’s torso as the secret ingredient.  Plus, if you didn’t dig their weak Thor tie-in episode from earlier this season now you’re going to have Lady Freakin’ Sif not only showing up but also fighting the bad guy in the SHIELD interrogation room, from the looks of the trailer at least.

It’s obviously too early to weigh in on what will become of next weeks’ episode, although I will admit to being excited because I’m a fan of Jaimie Alexander as Sif.  However, even with the Blue Man Group alien guy I am still struggling to care about the specifics of how Coulson was revived, even though I appreciated his choosing to save Skye’s life even though it meant playing into the Clairvoyant’s hands.  Am I the only one who thinks the most important part of this is not how Coulson was revived but instead why he was revived?  Seriously, Coulson’s a lot of fun in the movies and everything, but other than “he was a great guy” why the hell would Nick Fury go to so much dang trouble to save him?  It was enjoyable how “TAHITI” effectively used the entirety of Team Coulson to get to the bottom of the mystery, even emphasizing Skye’s importance by reaching multiple points where their progress stalled without her hacking prowess.  However, I just have never been able to get behind how this show has handled the “how did Coulson survive” mystery, and now they seem to have tied Skye into it as well what with Coulson being so mystified when Skye’s body almost instantly adapted to the alien miracle drug.

Luckily, while “TAHITI” didn’t really qualify as a show-changing event it did represent another piece of the show’s slow transition toward something else, such as a show which could someday count Agents Garrett and Triplett among its regular characters.  They were both welcome presences, some of that likely simply because they were different and new.  Triplett was the least effective of the pair, as they seemed to make him a more “our plane is so much smaller than your’s, and daddy doesn’t like me as much you” version of Ward.  Plus, the dude should seriously pick a better time to flirt with the hot English girl than when she’s looking at her dying friend through glass.

Paxton’s work as Garrett stood out far more, as he brought a far different, macho energy to the proceedings than Coulson’s amiable every-man.  I have my suspicions that SHIELD is a show too big to succeed meaning most everything it could have going for it has all of its important rough edges sanded off by the machine it goes through at ABC and Marvel.  As such, I don’t know if Paxton and Britt joining permanently would really help.  However, as of right now I look forward to their inevitable return.

“TAHITI” was another watchable hour of SHIELDs which presented two effective twists at the halfway point as well as introduced two potentially significant new characters.  With the explosion of the Guest House at the end and Minority Report-esque method of sorting through digital files for Fitz and Simmons, they did their best to do comic book movie spectacle on a TV budget, although Coulson and Garrett running onto the Bus with explosions behind them looked more comedic than they likely intended.  We can wait to see how this Prometheus torso reveal plays out, but if I’m honest I thought it was very weak, however I’ve been skeptical of the whole storyline from the beginning.  Coulson’s dazed look after he found out likely mirrors how many have felt while trying and failing to completely get into this dang show.  However, it’s getting better, just not quite as much as ABC would like us to believe.

1. Have You Looked at the Ratings Lately?  According to THR, the overnight ratings for Agents of SHIELD, dropping half of a point, brought a series low 1.7 rating with adults 18-49.  That last episode, “T.R.A.C.K.S.”, scored a 2.1.  It’s too early at this point to know how much of a boost that 1.7 for “TAHITI” will get from Live+7 Day DVR viewing.

NEXT TIME ON SHIELD

Let us know what you thought of this episode in the comments section.