So, here’s what happened this weekend at the domestic box office: The Amazing Spider-Man 2 (ASM 2) dropped pretty much on par with Spider-Man 3.  However, have you seen how much it’s making internationally?  Also, Neighbors just posted one of the biggest openings for an R-rated comedy ever.  We’ll try to figure out why.  Let’s break it down. 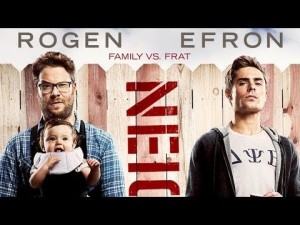 Not even Seth Rogen knew Neighbors was going to open this big.  Universal’s domestic distribution chief told THR, “They never expected this kind of opening. Seth is beyond thrilled,” before pointing out that 53% of the opening weekend audience was female, higher than normal for an R-rated co0medy.  How big was this, really?  Only Hangover 2 ($85.9 million), the first Sex and the City ($57 million), Ted ($54.4 million), and Jackass 3D ($50.3 million) had bigger openings for an R-rated comedy.

Why?  Sure, Rogen’s This is the End was a solid hit last year, improbably crossing the $100 million plateau in domestic gross ($101.4 million), but Neighbors just got halfway there on its opening weekend.  In fact, it made nearly as much on its first Friday ($19.6 million) than This is the End made in its entire opening weekend ($20.7 million).  Plus, Neighbors co-star Zac Efron already starred in a raunchy comedy this year, That Awkward Moment, and it topped out at just $26 million domestic.  Perhaps Rogen and Efron combined, however, was the perfect mix of kind-of young and slightly older, appealing to different demographics (e.g., a Seth Rogen fan would never normally see a Zac Efron movie, and vice versa).  Plus, with over half of the audience being female the advertising clearly gave them enough of Efron’s abs and Rose Byrne’s refreshingly not-stereo-typically-wife-character, and the word-of-mouth generated by surprisingly strong reviews didn’t hurt.

This might also be a case of audience conditioning.  Ever since The Hangover, there’s always one raunchy R-rated comedy which hits big per summer.  It remains to be seen what Neighbors’ performance means for this summers upcoming R-rated comedies A Million Ways to Die in the West and Sex Tape. 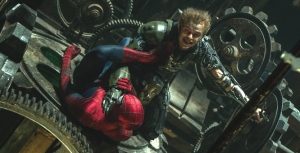 Foreign: $69.5 million this weekend for a new international gross of $403 million and worldwide total of $549.2 million

How Does It Compare to the Sam Raimi Spider-Man Films?: They all had higher 10-day totals than ASM 2‘s $146 million, with Sam Raimi’s first Spider-Man at $240 million, Spider-Man 2 at $225 million, and Spider-Man 3 at $223 million.  Remember that none of those films had the benefit of 3D ticket pricing.  The first Raimi film only declined 37% its second weekend, Spider-Man 2 declined 49%, and then Spider-Man 3 declined 61%, even with ASM 2.

How Does it Compare to The Amazing Spider-Man 1: Again, off the pace since after 10 days ASM 1 had $168 million, and it only declined 44% in its second weekend.

However, making comparisons with ASM 2 is exceedingly difficult since it is only the third Spider-Man film to ever be released at the beginning of May.  Both Spider-Man 2 and ASM 1 were released around the 4th of July holiday, potentially inflating their totals with a holiday bump.  Limited to just those released in early May (Spider-Man and Spider-Man 3), ASM 2 is off the pace of both while declining on par with Spider-Man 3.  Compared to other comic book movies released in early May, ASM 2 has made more in its first 10 days than the first Thor and X-Men Origins: Wolverine, and has at least avoided an embarrassing 70% decline like Origins: Wolverine.  However, it is nowhere near as big of a hit after 10 days than any of the Iron Man films or The Avengers, and is delincing at a faster rate.

Luckily, ASM 2 remains a strong play overseas, particularly in China.  As a result, ASM 2 seems likely to fall short of ASM 1‘s domestic total of $262 million but at least equaling if not surpassing its $490 million foreign total.

Foreign: Currently, its international gross stands at $61.4 million making for a worldwide total of $123.5 million

4. Heaven is for Real 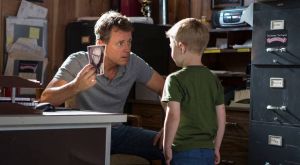 Foreign: A current foreign gross of $1.7 million for a worldwide total of $77.3 million.

This is the highest grossing “Christian” film not named Passion of the Christ or featuring a lion, a witch, or a wardrobe. 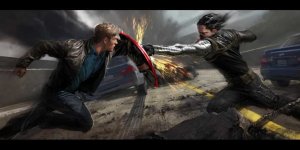 Foreign: Currently, its international gross stands at $450 million making for a worldwide total of $695.1 million

Winter Soldier is the highest-grossing Marvel Studios film not to feature Tony Stark as Iron Man, trailing all 3 Iron Man films and The Avengers on the domestic chart and just Iron Man 3 and The Avengers on the worldwide chart.  So, in the Marvel Studios heirarchy Captain America seems to have taken second position behind Iron Man, passing Thor.  If you expand outward to include all Marvel films, regardless of studio, Captain America is in third position, behind the Iron Man films and all of the Spider-Man films.  If you look at just comic book movies in general, regardless of Marvel/DC, Captain America is at least ahead of Man of Steel’s worldwide total of $668 million but behind its domestic total of $291 million.  The point?  As far as box office is concerned, Captain America is surging in popularity, but there are still several more bankable characters in front of him.

Foreign: Currently, its international gross stands at $304.6 million making for a worldwide total of $417.6 million

Rio 2 opened almost exactly even with the first Rio from 3 years ago, but by this point it’s fallen behind by around $12 million.  Similarly, its $304.6 million at the foreign box office is still a bit behind the first Rio‘s ultimate foreign gross of $341 million. 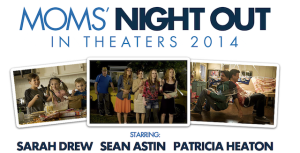 Foreign: No foreign release planned at the moment.

So, how exactly is Mom’s Night Out faith-based?  Patricia Heaton’s beleaguered mother character attempts to have a fun night out with two gal pals (and hilarity ensues, of course), but the women she rallies to her cause are from her same church congregation.  Beyond that, the connections are more behind the scenes since its distributors (TriStar Pictures, Provident Films, and Affirm Films) were behind faith-based hits Facing the Giants and Fireproof, with Fireproof‘s director actually playing a Christian pastor in Mom’s Night Out.  Plus, Mom’s Night Out directors Andrew and Jon Erwin were previously responsible for anti-abortion film October Baby.

So, with those connections Mom’s Night Out has inevitably been lumped together with 2014’s mega-successful faith-based dramas Son of God, God’s Not Dead, and Heaven is For Real, all of which at least passed $50 million domestic.  Well, Mom’s Night Out opened in just over 1,000 theaters, and actually scored a $4,100 per-theater average, third best of the weekend.  However, by comparison God’s Not Dead only opened in 780 theaters yet scored nearly $10 million its opening weekend.  So, while there is definitely support out there for Mom’s Night Out it’s not nearly as impressive.

Loosely based on Dorothy of Oz, a Wizard of Oz sequel penned by original author L. Frank Baum’s great-grandson, Legend of Oz involves Dorothy returning to a tornado-decimated Kansas and then returning to a Jester-controlled Oz.  It’s a musical with songs from Bryan Adams, and features the vocal talents of Lea Michele (Dorothy), Martin Short (Jester), Dan Aykroyd (Scarecrow), Kelsey Grammar (Tin Man), Jim Belushi (Cowardly Lion), and Bernadette Peters (Glinda).  Oliver Platt, Patrick Stewart, and Megan Hilty round out the cast.  That’s a cast full of names we know, but it’s not based on a well-known story and the quality of the animation is decidedly in the direct-to-video category.  So, why is in theaters and not on video shelves?  The fact that The Wizard of Oz 3D/IMAX re-release pulled in $22 million domestic and Oz: The Great and Powerful ended with nearly $500 million worldwide last year is probably all the answer you need.   However, they missed their Wizard of Oz nostalgia window, scoring the 7th worst performance for any film opening in between 2,500 and 3,000 theaters, even worse than what Vampire Academy did earlier this year.

Foreign: Currently, its international gross stands at $107.6 million making for a worldwide total of $255.6 million

Through the first 5 months of 2014, only Amazing Spider-Man 2, Winter Soldier, and The Lego Movie have made more domestically than Divergent.  Obviously, that won’t last, but it’s better than anyone could have reasonably expected after the recent death march of failed YA novel adaptations The Host, Beautiful Creatures, Mortal Instruments, and Vampire Academy.

Foreign: Currently, it has an international gross of $8.3 million for a worldwide total of $26.8 million.

As it turns out, “Fast & Furious star Paul Walker‘s final completed film” was not much of a marketing hook for Brick Mansions, which is not going to come close to the domestic total of recent similar films from producer Luc Besson, e.g., 3 Days to Kill ($30 million), The Family ($37 million), and Columbiana ($37 million).  Besson’s films rely more on the international market, though, where Brick Mansions is off to a relatively slow start.

What’s Up Next?: Armed with far stronger-than-expected reviews, an American version of Godzilla storms back into theaters, likely to succeed where the dreaded 1997 version failed.  However, based upon last year’s remarkably similar Pacific Rim and the 75% of its worldwide gross which came from the international market Godzilla seems a stronger foreign bet than domestic.  It will open opposite Disney’s literal-rags-to-hopeful-riches baseball film Million Dollar Arm.  Both open wide on Friday (5/16).

UPDATE 5/13/14 – The studio-estimated box office totals have been replaced with actual totals.  The biggest difference?  Both Neighbors and Amazing Spider-Man 2 actually made slightly less than expected meaning the former had the 5th biggest opening for an R-rated comedy instead of 4th while the latter declined by over 61% instead of just 59%.