To read our other Arrow episode reviews please go here.

I’ll be honest: until the last minute of Arrow’s season 3 premiere I didn’t really know what I was going to talk about in my review of the episode, beyond “It was really good, ultra-fun action scenes, pretty much every single thing the producers have repeatedly promised in their endless interviews hyping the new season.”  Oh, sure, this was the episode with Oliver and Felicity’s big first date, but anyone who knows their superhero 101 could have seen the whole, “I’m pushing you away to protect you” ending coming a mile away.  There was quite a bit of Spider-Man 2 to all of it, except here Oliver refused to say he didn’t love Felicity (instead, he initiated their first kiss) and Felicity didn’t pull a righteous, “Screw you.  I make my own decisions, and I choose to be with you, risks and all.  Go get ’em, tiger” at the end.  She did, however, give Oliver a rather confident, “You can’t keep stringing me along” speech (good for her).  Just because it wasn’t exactly new territory doesn’t mean it wasn’t well done, of course, but… 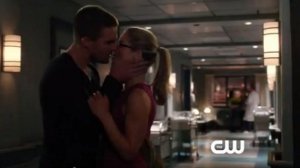 Then they killed Sara Lance.  The worst part is that anyone who’s ever seen more than a handful of Arrow episodes should have seen it coming, simply by virtue of, “Huh, the episode’s almost over, and they’ve yet to do their standard big episode cliffhanger.  Something bad is about to go down pretty quick here.”  And boy does it happen fast, clocking in at less than a minute of screen time.  Sara is walking on a rooftop in her full Canary costume, someone off-screen bellows in a low, digitally-altered voice, “Hello, Sara,” causing her to turn, ask, “What are you doing here?” before getting shot in the gut with three arrows.  The impact causes her to fall several stories off the building, landing right in front of Laurel in the alleyway below.  Cue dramatic cry from Laurel and a somber Arrow title card.  End of episode.

You know what happened here, right?  Somebody at Arrow re-watched or re-read The Watchmen over the summer and decided it’d be awesome to kill off Sara just as The Watchmen opened by throwing The Comedian out the window of a skyscraper, thus turning the story into a search for the killer.  Or they watched The Simpsons’ “Who Shot Mr. Burns?” or Dallas’ “Who Shot J.R.?” or any other number of possibilities.  Either way, this has effectively turned season 3 of Arrow into the season of “Who shot Sara Lance?”

On one level, I love it.  Sara is absolutely the perfect character to kill off.  She no longer served an obvious purpose since was mostly used last year to help inform Oliver’s conflict with Slade via the flashbacks as well as mirror Oliver’s efforts to transition from vigilante to hero in the present.  Now, her death in season 3 will affect every single character on the show (well, maybe not so much Thea), creating some interesting conflict. What kind of conversation is Captain Lance going to have with the Arrow about this?  How will Laurel treat Oliver after this?  How will this affect Diggle’s apparent decision to stay out of field duty what with being a new dad and all?  Plus, it will re-introduce the mystery element so crucial to the majority of the first season (remember how little we knew about who the bad guys were or what they were up to for so many episodes?) but lost in the super-soldier serum haze and basic revenge tale of last season.  This is a story generator, with the implied promise that as part of Oliver’s investigation into her death we will see Sara again in flashbacks, possibly exploring exactly how she joined The League of Assassins and what she had been up to in the 6 months between seasons 2 and 3.  She is definitely, undeniably dead, but we haven’t seen the last of her.

On another level, I hate it for the simple reason that I really liked Sara.  Well, not at first.  I seriously struggled with the entire idea that she wasn’t actually dead, as so much of that undercut the rich drama which had been explored and resolved in the first season.  Plus, I can accept one guy stranded on an island for 5 years and returning to the world as a butt-kicking vigilante, but for whatever reason I have a harder time believing it when you start giving that character description to a new character as well.  However, I adjusted, in no small part because of how consistently awesome Caity Lotz was in her fight scenes as Canary and those gut-wrenching scenes with her poor dad, particularly the one in the diner early on in the season (you know, the first time he finds out his daughter is still alive).

But those in the know have been predicting Sara’s death the second she was cast on the show.  Arrow’s producers chose to give Laurel Lance a sister she’s never had in the comics (as far as I know, at least), and then they made this new sister a proto-version of Black Canary.  Then, to appease disgruntled Laurel fans (or, more accurately, simply to clear up the confusion), they took to interviews to promise that none of this meant Laurel wouldn’t someday become Black Canary ala the comics.  They practically announced, “We created this Sara character just to kill her, and her death will play a big part in Laurel eventually becoming Black Canary.” The problem, from a fan perspective, was that Sara’s ascension last season came during Laurel’s descent, the character being driven so low and Katie Cassidy given such consistently poor material that fans certainly, and in some circles visciously turned on her.  Now, that they’ve killed Sara it will certainly be fodder for “They killed the wrong Lance sister” comments.  I’d personally prefer that both Lance sisters stick around, but it’s a little late for that now.

The question remains whether or not they actually needed to kill Sara off.  No, they didn’t.  Laurel doesn’t actually have to become Black Canary just as there was no reason Sara couldn’t have changed her hero persona.  There was a perfectly plausible Birds of Prey spin-off waiting to happen, centered around Huntress, Sara Lance, and whoever else they could spare.  However, this is the direction they went with it, and while it was among the more obvious choices it does at least mean we’re likely to see a lot more of Nyssa, Sara’s ex-lover who will undoubtedly return to assist in Oliver’s investigation.  Nyssa is an interesting character they’ve only begun playing around with.  So, that should be fun to watch.

It has now been two hours since I finished watching “The Calm,” and I don’t immediately remember the specific details of what the bad guys were even up to, other than the general “the new Vertigo was trying to blow people up.”  The cool thing is that it doesn’t really matter because beyond the specifics of the plot I remember all of the rich character interaction, Oliver and Felicity’s interesting first date and bitter-sweet first kiss, Oliver’s heart-breaking confrontation with Diggle, and even poor Captain Lance’s struggles with coping with his new life as a pencil-pushing administrator.  This already feels like a more personal, intimate show than it did last year, and that’s a good start.  However, more than anything else, I remember that they killed off Sara Lance, and though it may provide some compelling stories in the episodes to come it pretty thoroughly sucks right now.

1. I am so tempted to mock Oliver’s vertigo-induced fight with himself earlier in the episode, mostly because a superhero fighting the civilian version of himself will forever call to mind the remarkably unfortunate moment Superman fought Clark Kent in Superman 3. However, I have to give them credit – it worked fairly well, although it clearly lacked in the subtlety department.

2. So, Oliver just resisted the effects of vertigo at the end through sheer will power? I’m pretty sure that’s not how drugs really work, but, I dunno, mind over matter I guess.  Of course, we shouldn’t get too pharmacological about it.  Oliver fighting himself was a visual representation of his central conflict, and by the time he was injected again he’d made his decision on the matter.  The drug was simply the writers’ mechanism for exploring all of that.

3. Can a corporation simply come in and completely re-name a city? Because that’s totally what Ray Palmer is proposing to do with Starling City, changing it to the more comic book appropriate Star City.  I know there’s that town in Kansas which briefly re-named itself Google to get experiment high-speed internet, but that was a different situation.

4. May be a stupid question, but how exactly did Ray Palmer know the fart noises audio files Felicity had flooded his computer with were the farts of porcupines?

5. Amanda Waller threatened the family of one her own soldiers just to get Oliver to cooperate!  Then again, she was going to totally wipe Starling City off the map last year.  So, yeah, she goes to extremes.  Plus, who could have possibly been the one to order her to save Oliver’s life in the first place?  There’s a mystery afoot.

6. From what we saw, Queen Consolidated was simply lucky that Oliver would occasionally show up for work last season. So, after his speech I wanted one of the Board Members to ask him about that one time he signed everything away to Isabel Rochev, who turned out to be a raving madwoman.

7. Emily Bett Rickards’ “I’ve already seen you shirtless.  Multiple times [trails off] shirtless all the time” was one of the funniest line readings she’s ever had on the show

9. If for whatever reason you have not watched its pilot or have decided against ever watching The Flash, that Barry Allen cameo at the end made no sense.

10. R.I.P., Sara Lance. You should never have returned from the dead, but then you did and turned out to be kind of awesome, but now you’re dead for real, and I’m sad.

11. Who killed Sara Lance? The most obvious answer is Ra’s Al Guhl, which must mean it’s not him.  He’s too obvious, right?  Or do they simply want us to think it couldn’t be him because of that?

AVClub – They gave it a “B,” concluding that “‘The Calm’ ends up too shapeless to reveal what the show’s third season has in store, and it’s done in by a little too much uninspired execution.”

Make sure to check out Entertainment Weekly’s interview with Arrow producer Marc Guggenheim.  He explains the what and why of Sara’s death, and clarifies that, yes, she is absolutely dead for good.