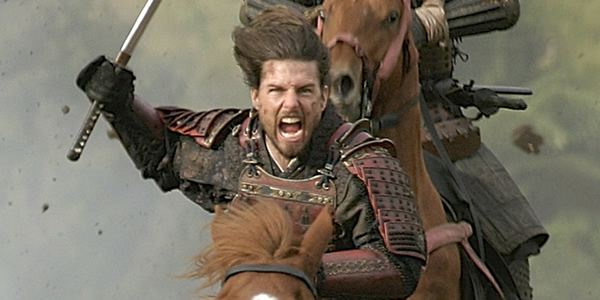 If you wanted to see a new movie this weekend your choices were mostly all of the same movies that were out last weekend, the only exceptions being a found footage horror movie called Pyramids opening in just under 600 theaters and Reese Witherspoon’s awards contender Wild debuting in less than 30 theaters.  The result was the second worst weekend of the year in terms of overall box office, with only the first weekend in September (i.e., around the time schools started back up and summer ended) being worse. The question is why didn’t Hollywood put out a new movie worth seeing, and the answer is because they almost never do that the week after Thanksgiving, a historically slow period for movies.  This year was especially bad, the worst overall performance from a post-Thanksgiving week since 2011 and second worst since 1998.  That’s not especially surprising considering that pretty much everything about the box office this year has been down, with the most recent sure-fire blockbuster to disappoint being The Hunger Games: Mockingjay Part 1.  Plus, the two holdover Thanksgiving releases, Penguins of Madagascar and Horrible Bosses 2, aren’t exactly holding anyone’s attention.

There are certain weekends in every year that Hollywood has given up on, and the one after Thanksgiving just happens to be one of them.  So many resources are devoted to building to big business over Thanksgiving that Hollywood basically needs to take a week off to regroup and gear up for the push toward Christmas, or so you’d think.  I have no idea if there really are exhausted studio types begging for a week to simply stop and retool, or poor, forever beleaguered business types pointing to spreadsheets and what-not explaining the futility in devoting any amount of money to releasing a new movie the weekend everyone uses to Christmas shop and watch college football.  The result is that these are the post-Thanksgiving movies over the past handful of years:

I have to stop there to admit that there are at least 3 movies on that list that I’ve never actually heard of before.  Plus, I stop at Aeon Flux, Paramount’s modestly budgeted anime adaptation starring Charlize Theron, because it is the first one on this list which made more than $10 million in its opening weekend.  Most of them made less than $5 million.  These may have been the new movies opening after Thanksgiving, but they were not the ones which ruled the box office upon their debuts.  Post-Thanksgiving, leftovers are almost always the king, but doesn’t it kind of seem like Hollywood isn’t even trying that hard with these new movies?  Not a single one of the mentioned movies is a big budget event film or something starring a reliable star, but instead more middling fare dumped into a historically slow release frame.  So, when is the last time that Hollywood actually put out a big movie right after Thanksgiving?

2003.  That year, Warner Bros. defied tradition and put out Tom Cruise’s $140 million budget historical epic The Last Samurai, and they were rewarded with a $24 million opening weekend (that’s like $32 million at current ticket prices).  That was easily good enough for a first place debut (the next closest movie, Honey, made half of what Last Samurai did), and kickstarted a box office run that ended with $111 million, $456 million worldwide, placing it at #20 in 2003’s year-end list of top grossing movies.  There were mitigating factors, of course.  At that time, Tom Cruise’s box office prowess was pretty much unparalleled.  He’d even managed to get the supremely strange Vanilla Sky up to $100 million domestic just two years earlier.  Plus, Last Samurai had its eye on the Academy Awards as well as the competition, with Lord of the Rings: Return of the King due out just two weeks later.  They needed to get out earlier than normal both to be seen by the Academy as well as earn a slightly wider box office birth in front of the sure-to-be behemoth-sized haul awaiting Return of the King.  The strategy worked, and in addition to its impressive box office performance Last Samurai picked up 3 technical category Academy Award nominations as well as a surprise acting nomination for Ken Watanabe, all of which it lost, most of them to Return of the King.

If you go back even further than that, there are only a couple of other notable post-Thanksgiving releases, like Analyze That in 2002, which turned out to be a box office bomb ($55m worldwide against a $60m production budget), Behind Enemy Lines in 2001, which had a big opening weekend (nearly $19m) before getting crushed the rest of December, the shot-for-shot Psycho remake in 1998, which turned into a box office bomb ($37m worldwide on a $60m budget), and Star Trek VI: The Undiscovered Country in 1991, which set a franchise high for opening weekend ($18m) on the way to a domestic haul of $75m (like $145m at current ticket prices).

That’s about it.  In fact, there were multiple years with absolutely no new movies right after Thanksgiving.  Hollywood simply doesn’t try that hard the week after Thanksgiving, but that’s usually because it just tries so darn hard to get us to see all of its big movies in November.  That first week in December is always a breather for us to prepare for the next wave, and maybe make it out to see any movies we missed over Thanksgiving.  When you look at this weekend’s top 10, you can question why one of the family friendly films due out later (Annie, Night at the Museum, Into the Woods) in the month didn’t try and escape the crunch and take a crack at this weekend.  You can also look at how one of the trends with release schedules right now is to do the unexpected, Winter Soldier being a big budget movie in April instead of over the summer, Guardians of the Galaxy killing it in August even though that’s supposed to be a slow period for business, and The Maze Runner turning into a big hit despite coming out in one of the slowest months of the year, September.  So, why doesn’t someone pull a Last Samurai and give us a truly notable new movie right after Thanksgiving?  Maybe they will in the future, but they didn’t this year because at this time last year The Hunger Games: Catching Fire and Frozen were absolutely obliterating all competition.  Few if any really predicted that Hunger Games: Mockingjay Part 1 would fall so short of such dominance this year.  Plus, other than Last Samurai and Star Trek VI it kind of seems like not a single post-Thanksgiving new release has turned into any kind of sizable box office success, not that any other films of comparable size have ever been released right after Thanksgiving.

Foreign: $31.6m from pretty much everywhere possible in the world this weekend except for China, which won’t get it until next year.  Mockingjay has now made $302m internationally and $560.1m worldwide, with its strongest international market being the UK ($39.6m).

By Hunger Games franchise standards, this is all very, very not good, with Mockingjay’s domestic performance now around $40m behind the pace of the first Hunger Games and $75m behind the pace of Catching Fire.  It does continue to perform slightly better than the most recent Part 1’s, Deathly Hallows Part 1 and Breaking Dawn Part 1, which were sitting at $244m and $246m respectively at the same point in their release cycles.  Plus, Mockingjay is doing just fine overseas, already better than the first Hunger Games ($283m) with a chance of maybe getting up to $400m, short of Catching Fire‘s foreign total of $440m.

2. The Penguins of Madagascar

Well, that’s not good.  Rise of the Guardians was DreamWorks Animation’s most recent Thanksgiving release, and it was considered a bit of a box office disaster, barely getting to $100m domestic ($103M) and $306m worldwide against a $145m production budget.  Well, Penguins of Madagascar is now performing almost exactly on par, the two film’s 12-day totals being nearly identical (Guardians=$48.8m, Penguins=$49.5m).  DreamWorks had to have been hoping for more from Penguins considering that it’s a spin-off of a well-known, lucrative franchise.  This can’t be helping Jeffrey Kratzenberg’s ongoing efforts to sell off DreamWorks Animation. 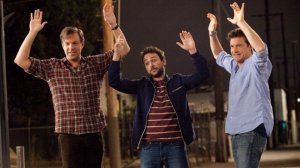 The first Horrible Bosses improbably made $117.5m domestic, $209m worldwide.  Yeah, Horrible Bosses 2 isn’t going to do that, although I don’t know that any thought it would.  However, that budget is low enough, and this second weekend hold decent enough that you’d expect Horrible Bosses 2 to eventually turn a profit.

Foreign: $4m from 27 markets this weekend, including a debut in Thailand.  It’s still only playing in less than two-thirds of the international marketplace, with Korea in January and China sometime after that.  For now, its international/worldwide split is up to $62.8m/$240.2m.

Wait and see.  Big Hero 6 is coasting to an eventual domestic total north of Wreck It Ralph ($189m) and maybe Tangled ($200m) as well.  However, the bigger story will be worldwide, which Big Hero 6 is just barely getting into right now. 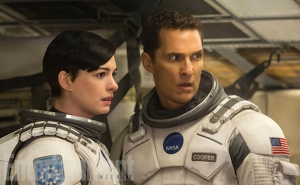 Domestic audiences may be relatively cool on Interstellar compared to Christopher Nolan’s most recent efforts (Dark Knight, Inception, Dark Knight Rises), but for a variety of reasons Interstellar (not in 3D, nearly 3 hours long, challenging story) was always highly unlikely to be the box office equal of those films.  Of course, we say that, but what do we then make of the fact Interstellar is a bit of a box office phenomenon right now in China and South Korea, even bigger than Gravity, the most recent IMAX-friendly, space-based adventure?

6. Dumb and Dumber To

Foreign: Universal and Red Granite are splitting international distribution which is making weekly accounts hard to come by.  So, let’s just look at cumulative totals, which has Dumb and Dumb To up to $38.8m from 28 international markets and $116.9m worldwide.

7. The Theory of Everything

Foreign: Started its international roll-out into Hong Kong and Taiwan, grossing less than $300,000. 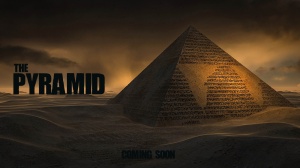 Fox decided this was a good weekend to dump this found footage horror film, which is apparently quite similar to the relatively recent As Above, So Below.  They realized this wasn’t going to be a significant box office presence.  So, why not dump it in a weekend everyone else had abandoned, devote almost no marketing to it, and see what happens.

Ridley Scott’s Exodus makes its domestic debut after having premiered to $23.1m overseas this weekend, including no. 1 debuts in Korea, Mexico, and Spain.  It will be going up against Chris Rock’s buzzy comedy Top Five, which sparked a bidding war at this year’s Toronto Film Festival.  The rest of the month will bring, in quick succession, The Hobbit, Annie, and Night at the Museum 3 before a Christmas packed with The Interview, Into the Woods, Unbroken, American Sniper, Big Eyes, and Selma.