David Fincher, the genius director behind Fight Club, The Social Network, and Gone Girl, was recently listed by WhatCulture as one of 12 directors everyone hates working with but still get awesome results (Spoiler Alert: James Cameron came in as the most hated of the bunch). David Fincher ended up on #11 on the list largely due to his perfectionists tendencies:

His Reputation: After his feature debut Alien 3 was butchered by studio interference, perhaps it’s no surprise that Fincher has such a huge desire for control, and if necessary, will put his actors through an excruciating number of takes to get a scene right. Case in point, Zodiac’s Jake Gyllenhaal spoke to press about Fincher’s tendency for extensive takes, even deleting the last 10 takes in front of Gyllenhaal, to which he said, “as an actor that’s very hard to hear.”

Fincher later confessed that this was a psychological trick to see if he could make the actor burst into tears, in order to better reflect the increasingly fractured state of his character. In his own defense, however, Fincher added, “I hate earnestness in performance…Usually by Take 17 the earnestness is gone.” R. Lee Ermey, who worked on Fincher’s Se7en, meanwhile called the director a “little chicken s***” for being precious about sticking obsessively to the written word rather then improvising. More amusingly, Ben Affleck and Fincher butted heads on the set of Gone Girl over which baseball team’s hat he should wear during an airport scene.

Why He’s Worth Working With: Still, Fincher’s films are almost universally critically acclaimed and financially successful, and in addition to earning two Best Director Oscar nominations for himself, he has steered numerous actors to Oscar nods: Brad Pitt and Taraji P. Henson for The Curious Case of Benjamin Button, Jesse Eisenberg for The Social Network, Rooney Mara for The Girl with the Dragon Tattoo, and almost certainly Rosamund Pike for Gone Girl. 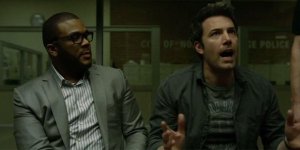 I haven’t seen any real indication that Affleck actually hated working with Fincher on Gone Girl, but he clearly must have loved the results because today brings the news that the two are teaming back up together. In fact, they’re bringing Gone Girl author Gillian Flynn with them to a proposed remake of Alfred Hitchock’s classic Strangers on a Train, with Flynn scripting, Fincher directing, and Affleck starring and producing (technically, Flynn is only in talks to join the project, not officially hired yet). 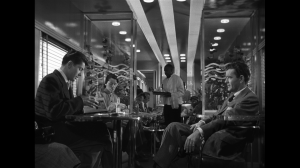 Here’s what Deadline has heard about a potential plot for their new Strangers on a Train (which they’re just calling Strangers):

Though the Hitchcock remake–a Warner Bros library title and an adaptation of the Patricia Highsmith novel–will be its basis, this film will be contemporary and redefined for the times. This one might be best titled Strangers On A Plane, as Affleck will play a variation of the role played by Farley Granger of a tennis pro who is bored with his marriage and wants to get divorced, but instead gets entwined with a wealthy socialite psycho who proposes the notion of exchanging murders. The twist here is a compelling one. Affleck will play a movie star–in the middle of a campaign for an Oscar during awards season–whose private plane breaks down and is given a ride to LA on another plane by a wealthy stranger. In Fincher’s hands, who knows how that goes, but it sure does seem like fertile ground.

Well, write what you know, I guess, and with the success of Gone Girl Gillian Flynn is currently getting a crash course in the Oscar campaign season, something which Affleck and Fincher are old pros at by now. However, there’s a part of me that thinks we’ve only just gotten to the point where we can watch Ben Affleck in a movie and see the character he’s playing instead of simply seeing Ben Affleck the celebrity. Is it really the best choice, then, for him to play a character which will invariably so closely mirror his own public persona? However, this sounds like a prime opportunity for plenty of black humor at Hollywood’s expense, which is usually a lot of fun. Plus, after Gone Girl I’ll see just about anything Flynn and Fincher do together, which in addition to this remake also includes a potential remake of acclaimed British series Utopia “about a group of strangers whose lives are thrust into turmoil when they find an unpublished manuscript for The Utopia Experiments.” Should that project go to series at HBO Fincher will direct every episode and Flynn will do the same on the writing side of things. Having Affleck along for the ride on a separate project which happens to be a Hitchcock remake is just a bonus, really.

According to Deadline, Strangers is on the fast track, and Affleck is already moving things around on his schedule to fit this project in-between Live By Night, which he is filming and starring in this year, and Justice League in 2016. This could end up playing out like the Jennifer Lawrence-Bradley Cooper-David O. Russell partnership whereby he used to have a reputation as a difficult director but suddenly made multiple high-profile, awards-contending films with the same actors in subsequent years because they just loved working with him (or at least loved the performances he got out of them). Ben Affleck could be David Fincher’s Jennifer Lawrence.