Exactly how married is Paramount to that July 18, 2016 release date for Star Trek 3? Do they have any flexibility on that? Normally, these things can be pushed back if need be, and the involved studio usually moves another film up to take over the vacated release date. However, next year is Star Trek’s 50th anniversary. I’m guessing that Paramount’s celebration of that event is being built up around that July 18, 2016 release much in the same way that Warner Bros.’ celebration of Superman’s 75th anniversary was built around the release of Man of Steel or Doctor Who’s 50th anniversary celebrations all led up to the special multi-Doctor episode “Day of the Doctor.”  As such, Paramount is probably pretty dang married to that July 18, 2016 date.

That’s why it is mildly stunning to me that they apparently don’t even have a script for this movie yet. Departing director Roberto Orci recently confirmed that the Star Trek 3 script he’d been co-writing with John D. Payne and Patrick McKay since last summer won’t be used. Orci is still officially involved with the film, though, earning the ever-dubious credit of Executive Producer. He told Trek Movie that he actually had no idea who would end up writing the new script, but that “the story we are talking about would be awesome, hang in there!” 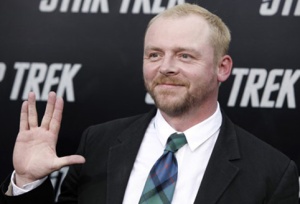 Well, now we know who they got to write the script: Simon Pegg and Doug Jung (TNT’s Dark Blue, Banshee). The news was exclusively revealed by Deadline, who actually said of the writing pair, “They are just getting underway.” The news outlet made no specific reference to whether or not Pegg and Jung are maybe simply re-writing Orci et al.’s existing script or starting from scratch. Instead, the focus was mainly on pointing out that Pegg is more than just the guy who played Scotty in the first two Star Trek films. He co-wrote every film of the Cornetto Trilogy with Edgar Wright (Shaun Of The Dead, Hot Fuzz and The World’s Endi) as well as Run Fatboy Run, all four of which are also films he stars in. So, he has plenty of experience with writing his own films. He also authored a highly entertaining memoir, Nerd Do Well: A Small’s Boy’s Journey to Becoming a Kid. Jung, well, he hasn’t done any of that. He wrote a currently un-produced script for Bad Robot and Paramount, which is why they thought of him for this gig. Other than that, he’s written a couple of episodes of Cinemax’s Banshee, and co-created the short-lived Dylan McDermott series Dark Blue. Pegg is understandably the one who really jumps out at you. I’m a huge fan of Pegg’s Edgar Wright films, and I’m always delighted at how intelligent, charming, and funny he comes off in interviews. So, I am optimistic about what he can do with a Star Trek script.

But, wow, they don’t actually have a script yet? That’s very not good. As a point of comparison, Johnny Depp’s Alice in Wonderland sequel, Through the Looking Glass, is also due out next summer, May 27, 2016 to be exact. Not only do they have a finished script they’ve actually already wrapped shooting, according to THR. Of course, if Through the Looking Glass is anything like its predecessor it will be more visual effects than live action/practical sets meaning they will need a longer post-production cycle than something like Star Trek 3, not that Star Trek 3 won’t also have plenty of visual effects. Plus, most of next year’s big films are nowhere as far along. The Huntsman (4/22) keeps losing and gaining new directors, Captain America: Civil War (5/6) doesn’t actually start filming until April, the same goes for The Suicide Squad (8/1; assuming their recent casting woes don’t force a delay), and I’ve lost track of where Uncharted (6/10), Independence Day 2 (6/24), The Mummy (6/24) are in terms of writing/directing/filming. 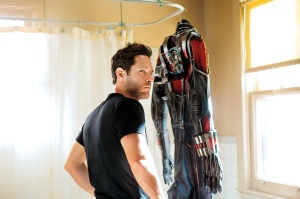 It’s not really all that impossible for Paramount to pull Star Trek 3 off in time even though we’re now around a year and a half out and they’ve only just now hired people to write a script, be it from scratch or a heavy re-write of what they already had. It’s actually not that dissimilar to the bind Marvel Studios was in with Ant-Man after Edgar Wright left, and just like what’s happening with Simon Pegg with Star Trek one of Ant-Man’s own stars with some prior writing experience, Paul Rudd, ultimately stepped up to co-write a new script. However, that was also a situation where they had literally years of planning behind them and untold amounts of early pre-visualization work already accomplished. That’s how Marvel was able to pull off only entering into principle photography on a major, big budget blockbuster a mere 10 months before its release even though most films of a similar size would have already wrapped filming by that point. Star Trek 3 isn’t in nearly as big of a timecrunch as Ant-Man. However, doesn’t it seem like they should be in pre-production already or about to enter into it, scouting locations, getting the various film departments started in the planning stages of their tasks, etc. If you already know what the film’s story is going to be you can do some of that stuff without a script, but, dang, let’s hope Simon Pegg and Doug Jung are fast writers. Orci and friends took half a year to crank out something which Paramount ultimately rejected. That obviously can’t happen again.

Of course, we want the best film possible, and probably don’t care how we get that.  The following video is a nice reminder of the various flaws within the last Star Trek film we got, Star Trek Into Darkness: