Any time a Friday the 13th comes around on the calender there seems to a very noticeable uptick in a 24-hour interest in anything and everything Jason Voorhees (might I suggest my trivia articles for every Friday the 13th film?).  To some, as soon as the day is over they’ll just go on with their lives, not at all pondering the past and future of that old hockey mask-loving weirdo we call Jason.  Don’t tell that to Platinum Dunes’ Brad Fuller.  As the producer of the 2009 Friday the 13th reboot who is still at work on some kind of sequel, he is hit up with questions on social media every single day:

The fans specifically want to know all about the next Friday the 13th movie, a topic covered pretty much to perfection in Esquire’s recent interview with Fuller. The 2009 film starring Supernatural’s Jared Padelecki and (now The Flash’s) Danielle Panabaker came right at the tailend of the 70s/80s horror film remake craze, opening to a bigger-than-expected $40.5 million before declining 80% in its second weekend, the biggest second weekend drop in history for a movie playing in more than 2,500 theaters. It was out of the box office top 10 after its third weekend, ultimately ending up with $65m domestic, $91m worldwide on a $19m production budget, qualifying as a modest hit. That was enough money to warrant a cautiously announced sequel, kind of a, “We’re going to make another one, but, wow, people really didn’t seem to like that first one. We need to be careful here.” That cautiousness has turned into 6 years with no sequel.

I am one of those people who didn’t like the 2009 Friday the 13th. However, that film was never going to be for me. Although I grew up on Friday the 13th and Halloween marathons on TV and seeing Scream and I Know What You Did Last Summer movies in the theaters, at a certain point I grew beyond bored with slasher movies. You have to give me something more in horror now, be it self-ware comedy (Tucker and Dale Vs. Evil), character-centric hauntings (The Conjuring, Sinister), or something technically impressive (the editing in Oculus is Oscar-worthy!). A parade of creative deaths for unlikable people doesn’t do it for me anymore.

Not surprisingly, then, I can’t stand the flat, grimey visuals and humorless, extreme gore aesthetic of the Platinum Dunes horror films, like 2003’s Texas Chainsaw Massacre. I went into their Friday the 13th knowing I wasn’t going to like it, mostly just there for nostalgia and to see if Jared Padelecki could play anything other than Sam Winchester (maybe not, as it turns out). They essentially compressed the best parts of the first four original Friday the 13th films, stealing one story beat from here, one cool kill from there, playing like a greatest hits package. However, there’s a real nastiness to all of it as well as a surprising mean streak, coming off like the writers and director had an active contempt for every character other than the two nice ones played by Padelecki and Panabaker. The only prior Friday the 13th which left me feeling as dirty was Part V, i.e., the really sleazy one unsurprisingly directed by a guy who came from the adult film world. 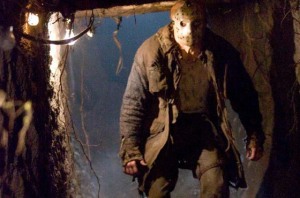 So, no, I wasn’t exactly crestfallen when a sequel failed to materialize. Just about every interview with someone from Platinum Dunes since then gives the impression they have no idea where to take it from here. There was the period where they were talking about maybe doing a Friday the 13th without Jason Voorhees (look at Part V and most of Jason Goes to Hell for how well that worked out in the past). Then there were consistent rumors of doing a found footage Friday the 13th. Along the way, the rights to the franchise ended up back at Paramount after having been with New Line/Warner Bros. since the early 90s, and although a new Friday the 13th has officially been announced its release date has already been pushed back twice (March 2015 to November 2015 to May 13, 2016).

In his Esquire interview, Fuller still sounds like a man struggling to accept what many a prior director/producer/writer connected to a slasher franchise has learned: These are rather naked exercises in film commerce, and they rather quickly run out of compelling stories to tell. He hints that the direction they are exploring is to ponder some kind of explanation for why Jason never dies, although he still doesn’t know if it will be related to the 2009 film or not. Of course, the “Why won’t he stay dead?” thing has been done before in slasher sequels. See: Jason Goes to Hell and Halloween 6: The Curse of Michael Myers. Actually, scratch that. Don’t see those; they’re both terrible. Drew Goddard’s re-affirmation parody Cabin in the Woods (2012) probably did it best by (spoiler alert) suggesting an in-universe explanation wherein the classic slasher scenarios were actually all part of an elaborate blood sacrifice ritual meant to appease ancient gods (end spoiler).

It all leaves me wondering if we even really need another Friday the 13th movie at this point. The classic monsters of horror never truly go away, with vampires, werewolves, and zombies all experiencing their high and low periods of popularity throughout film history. However, there’s something to latch onto there, vampires giving us a way to indirectly talk about sex, werewolves appealing to our struggles with identity and self-control, and zombies conveniently working as a metaphor for whatever hot button issue you want to use. Jason Voorhees, Mike Myers, etc. are just voiceless bogeymen who have both come back around two times now, first in sequels keyed off of the slasher-revival kicked off by the first Scream and then again in remakes spurred on by the success of 2003’s Texas Chainsaw. That befits the cyclical nature of popular film, but it would seem to have less to do with any kind of enduring appeal and everything to do with nostalgia and fiscal sense. Is there any real reason to make another Friday the 13th beyond nostalgia?

But I’m not one of those people hitting Fuller up on social media with questions about when we might see the next movie. Those are the people he’d make the new movie for, and I wouldn’t take that away from them. I just don’t know that I’m all that interested in the further cinematic adventures of Jason Voorhees, especially if it’s anything like the last one.