Fifty Shades of Grey made how much this weekend? Over $90 million? What?!?

Professor Farnsworth from Futurama, you wanna to take this one:

As a movie fanatic, it’s easy to feel that way whenever something you don’t like makes a ton of money, like how Twilight-fanfic-turned-novel-trilogy 50 Shades of Grey just broke pretty much every record possible for a movie released this time of the year. Such a mentality is inherently elitist and naively posits that in an ideal world only the best movies would be popular just as on TV only the good shows should get multiple seasons, with the “best movies” and “good shows” simply being the ones you personally like.

Not all types of entertainment are going to be for you, and it ultimately does you no good to rail against the prevailing evils of reality TV, Michael Bay movies, and Twilight. It’s best to simply make your peace with it, and remember that in ten years no one’s going to care how much money a movie made. They’re just going to watch it and like it or not like it. Your only real investment in the situation is whether or not the specific film you like does well enough to earn a sequel. You might also feel motivated to support a certain type of film to signal Hollywood that you want films with wittier, smarter scripts, more diverse casts, and some damn fine roles for women for a change.

But the history of Hollywood is ripe with examples where when something is successful the form will be emulated, not the substance, which is why after The Matrix we didn’t get films which “dabbled in Eastern mysticism and existential ponderings; we got bullet time and pleather outfits and movies that looked like they were shot in an aquarium.”

So, I may not personally like the Transformers movies, but why should I really care when its latest sequel comes along and makes over $1 billion worldwide? If they make another one I can continue on simply not watching it, looking forward to the latest pop culture site’s joke-y take on why the films are so damn popular. Britt Hayes tried after Age of Extinction, concluding, “Giant robots are cool and so is freedom. And that’s kind of been the theme of Michael Bay’s entire career: America, f— yeah.” The Transformers films have plenty of robots, fast cars, barely legal women, and an odd track record of offensive ethnic stereotyping. You could argue they both contribute to and reflect the dumbing down of America, but I’ve never spent much time worrying about the people who flock to see them.

That’s not the case with Twilight and 50 Shades of Grey. Unlike Transformers, both Twilight and 50 Shades are continually linked to a very specific audience: Women, a little on the younger side for Twilight and a little on the older side for 50 Shades of Grey (broadly speaking). The fact that Twilight became the 9th most lucrative film franchise of all time, and 50 Shades of Grey scored the biggest opening in history for a female director should be objectively good things. Good for teenage girls getting major films tailored to them the way teenage boys have for years, and good for Sam Taylor-Johnson showing Hollywood that a woman can make a big movie. But these films are all about scarily abusive relationships.

As Megan Maas of TheHuffingtonPost argued:

Bella displays three classic traits of a victim in an abusive relationship: She has intense low self-esteem; She loves the bad-boy (she only starts to have feelings for nice-guy Jacob when he turns into a werewolf); and she’s thrilled by the violent and dangerous acts of Edward (they aren’t red flags to her at all). Edward displays four hallmark traits of an abuser: He warns her away from him, only to increase her desire; He is possessive and tries to isolate her from her family and friends, he even incapacitates her car so she can’t get away; He stalks her constantly and when he can’t, he uses his vampire superpower to stalk her through others’ thoughts; and he has an intense temper but it’s not his fault because he’s a vampire.

Christian Grey also happens to show classic abuser signs: he warns Ana away by telling her he’s not good for her, he stalks her by deliberately tracing her mobile phone to find out where she is, and he attempts to control and isolate her by having her sign a non-disclosure agreement (so that she can’t discuss what goes on in their sexual relationship). Super healthy! Then to top it all off, he actually rapes her: “‘No,’ I protest, kicking him off.” Christian replies, “If you struggle, I’ll tie your feet, too. If you make a noise, Anastasia, I will gag you. Keep quiet. Katherine is probably outside listening, right now.” You learn that it is not really rape if you like it and as E.L. James writes, Anastasia does feel pleasure while she’s being raped. That message isn’t confusing at all when we are trying to combat college campus sexual assault on a national level.

Of course, not everyone sees it that way. I have a niece who recently posted on Facebook that instead of seeing 50 Shades of Grey last weekend she was going to make a donation to an Abused Women’s Center, which instantly set off an intense debate in the comments section. That’s to be expected considering that the books have sold over 100 million copies around the world and have been translated into over 50 different languages, and the first film just made a stunning $266 million in its worldwide debut. I recently watched part of Fifty Shades Uncovered, a documentary seeking to understand why the novels became such a worldwide sensations, and at one point a perfectly normal middle-aged woman at a book signing gleefully tells the camera how much her sex life with her long-time husband has improved because of the books. That should seem like a good thing, right?  Where’s the harm?

Christian Grey is supposedly a dominant in Fifty Shades. He isn’t a dominant. He’s a stalker. He breaks into Anastasia’s house, he bullies her friend, he buys her expensive gifts. He is constantly crossing boundaries. And S&M is all about respecting boundaries. There is no clear outline of how an S&M relationship has to be. There is no definite right and wrong way. But the foundation is that you have two people who agree, in a consensual manner, to the form the relationship should take. The movie seems to want to depict a very niche aspect of S&M: Total Power Exchange, where a submissive gives up total responsibility to the dominant. In my experience, while this can sound great in one’s fantasy, it rarely works in reality because it’s rarely safe or sane. S&M is fundamentally about consent. Trying to force your version of a relationship onto another person — as Christian Grey does in the film — is not a good way to start any relationship, particularly one that incorporates S&M. The relationship between Christian Grey and Anastasia Steele as depicted in the movie is an abusive relationship.

She argues the appeal of Fifty Shades is that it works as a hyper-sexualized American romantic fantasy about a poor girl who gets picked to be the princess for the amazing guy, but that the film is so dreadful only a masochist would want to see it.

That type of review didn’t stop anyone from going to see it this weekend, though. 50 Shades of Grey is an astounding success, with everyone in the industry bending over backward to praise Universal’s decision to delay the film from its original August release to the day before Valentine’s Day. Most films based on best-selling books suffer huge Friday-Saturday drops in their opening weekend, but thanks to Valentine’s Day 50 Shades of Grey actually jumped up 21% on Saturday. It was an obvious date-night choice, going from 82% of its audience being women on Friday to 68% women on Valentine’s Day. There does seem to some sense that not a lot of people actually liked what they saw, with opening night audiences giving it a C+ on CinemaScore, critics giving it just a 26% on RottenTomatoes, and just half of RottenTomatoes readers indicating they “liked it.”

How do you deal with all of this? Those unhappy with the Twilight phenomenon often happily pointed to Hunger Games with remarks like “See, that’s a good female role model,” and the same is happening with 50 Shades of Grey, with many pointing to the Maggie Gyllenhaal-James Spader 2002 dramedy Secretary as something which is actually S&M-practitioner approved. So, there’s that.

You can also get activist-y about it, as Megan Maas did, “I would encourage you to get to get involved with V-Day, check out Love Is Respect, and celebrate Teen Dating Violence awareness month to help eradicate violence toward women instead of romanticizing violence toward women.”

Or you can just let it go, and revel in the fact that a truly fun, inventive film like Kingsman: The Secret Service opening so big the same weekend as 50 Shades of Grey is a clear indication that not everyone is actually buying into the Anastasia and Christian abuse. 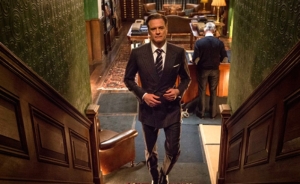 Initially scheduled to come out late last year, Kingsman was shifted to this weekend to serve as 50 Shades of Grey counter-programming, giving both men and women who are not down with Christian and Anastasia an alternate Valentine’s Day option. It was a risky move that paid off, with Kingsman actually racking up the seventh best President’s Day weekend performance of all time, all the more impressive considering its R rating. The film’s distributor, Fox, told THR, “I think we surfed the tsunami wave that’s known as Fifty Shades of Grey quite well. We have an incredibly entertaining, cheeky, funny, subversive movie that is fresh and original.” The fact that they also kept Kingsman in the mid-range budget territory makes its numbers look even more impressive.   Not all comic book movies need a minimum budget of $175m, yet the only notable mid-to-low-range budget effort on tap for the future is Ryan Reynolds’ Deadpool. 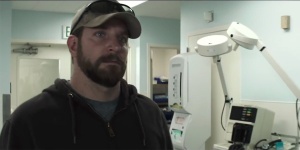 Technically considered a 2014 film since it first came out on Christmas Day, American Sniper is now the third biggest domestic release of 2014, behind Guardians of the Galaxy and Mockingjay Part 1. The next closest film (Winter Soldier) only made $259m domestic. 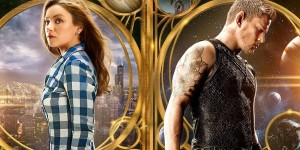 Jupiter is still pretty screwed considering industry reports that the real budget was well over $200m with a marketing spend of at least $100m, and it’s not going to get saved by the international box office, especially not when declining values of foreign currency (the Euro, Russia’s ruble, etc.) means studios are actually earning less overseas than the box office totals would seem to indicate.  That all being said, Jupiter did only decline 41% at the domestic box office this weekend, which is an astonishingly strong hold for a movie so many claim to hate.