It never occurred to me that there would be a time when Leonard Nimoy wasn’t alive. It’s not that I had conflated the man with the role and assumed Nimoy’s life cycle was that of a Vulcan’s, running several centuries longer than a human’s. No, there had been multiple reminders of his morality in recent years, such as his increasingly frail appearance in the new Star Trek movies or how he ultimately bailed on Fringe, presumably wishing to spend his final days doing something other than acting. Plus, when my best friend somewhat recently dropped everything to fly to the last Star Trek convention Nimoy was ever going to attend under the impression that it was likely every fan’s last chance to see him alive things like, “That dude’s going to die soon” start occurring to you. Or at least they should. Not to me.

Part of the reason I never allowed myself to ponder his mortality is because I honestly didn’t spend much time pondering Leonard Nimoy at all. To me, he seemed like a universal constant, certain to always kind of be around, off somewhere saying something Spock-like do doubt and sure to pop up in another cameo in Star Trek 3 next year. A lot of this comes down to the fact that I’m one of those Star Trek fans who came to the fandom through the Original Cast films and The Next Generation in the ‘80s into the ‘90s. Like so many others, the thing that put me over the top was Wrath of Khan. Well, by the time Nimoy did Wrath of Khan in 1982 he was already on the wrong side of 50. So, to me he seemed like someone who entered into the world already looking like a grandpa much like someone growing up on the Airplane and Naked Gun movies might assume Leslie Nielson kind of always looked like an older man with white hair. It wasn’t until relatively recently that I finally circled back around to take in The Original Series on Netflix, and even there Nimoy was not some bright-eyed young up-and-comer, at least not a traditional one considering that he was in his mid-30s by the time the show started.

Now he’s dead at the age of 83 from complications related to chronic obstructive pulmonary disease, and it’s a tall glass of suck. He was a poet, singer, photographer, actor, husband, father, war veteran. He started his career teaching acting classes in the 50s, and he exits this world with at least a couple of theaters named after him, the Leonard Nimoy Thalia Theater in New York City and the Leonard Nimoy Event Horizon Theater at the Griffith Observatory in Los Angeles. He once recorded a song called “The Ballad of Bilbo Baggins” which never ceases to make me smile:

He also made me laugh, this time completely intentionally, on The Simpsons, skewering his public persona as the man who not only played Spock but also served as the all-knowing narrator/host of programs like In Search Of… and Ancient Mysteries:

He also, as is often forgotten, directed Three Men and a Baby, the Ted Danson, Tom Selleck, Steve Guttenberg comedy which somewhat improbably became the highest-grossing film of 1987.

But, to me, he is and forever shall be Spock, modern pop culture’s original nerd. As President Barack Obama said earlier today, “Long before being nerdy was cool, there was Leonard Nimoy.” If not for the whole half-human/half-Vulcan thing, he might come off rather similarly to Big Bang Theory’s Sheldon Cooper, a brilliant man with an inherent inability to understand the way normal humans behave. 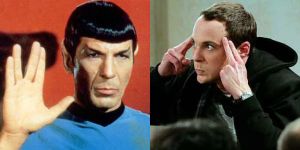 Star Trek is ostensibly about the search for life and other civilizations, but it is often fundamentally about what it means to be human, be it metaphorically or quite literally in the form of characters like Spock, Data, Seven of Nine, or T’Pol who struggle as outsiders in a largely human world. That started with Spock, who was originally just supposed to be a frustratingly logical foil for the main characters, but it was the often subtle humanity Nimoy brought to the role or even a mere arch of his exquisite eyebrow that quickly endeared him to us all.

The focus of the Original Series was always on the central trio of Spock, Kirk, and McCoy, and by the time the films came along that focus shifted somewhat to Kirk and Spock, traumatizing a generation of filmgoers when Wrath of Khan ended with Spock’s iconic sacrifice in the name of the needs of the many outweighing the needs of the few. Spock was such a popular character, and Wrath of Khan so successful that they devoted the entire freakin’ sequel to figuring out a way to bringing Spock back to life. Nimoy was on board as director for Search for Spock just as he would be The Voyage Home, forming a rather hilarious comedy duo with William Shatner as fishes out of water in 1980s San Francisco in the latter.

However, Star Trek is about more than just a greatest hits lists of its notable movies. The lasting legacy of Star Trek truly lies in something which is dfficult to understand for those distracted by all the tribbles and costumed “nerds” attending conventions. Star Trek is the type of show you consistently hear scientists and inventors point to as being a source of inspiration, be it an African-American female astronaut admitting she only ever dreamed of such a life because she saw Nichelle Nichols doing it as Uhura on Star Trek or the inventor of the cellphone crediting the classic Star Trek communicator. Leonard Nimoy’s Spock was one such inspiration. To borrow a line from Imitation Game’s screenwriter at this year’s Oscars, Spock reminded fans that it was okay to be different. It was okay to be intelligent and bookish. It was okay to be a nerd.  That’s what Spock was.  Sure, when his best friends was Kirk it also kind of seemed like Spock was the nerd who got to hang out with the captain of the football team who was having affairs withe every single one of the cheerleaders, but in an era of pop culture which caters to the nerd in all of us more than ever before we are overflowing with nerd icons these days.  Once upon a time, you kind of just had Spock, and he was awesome.

And he always will be, even now that Leonard Nimoy is gone. It seems fitting that his final Tweet reads:

A life is like a garden. Perfect moments can be had, but not preserved, except in memory. LLAP

Live long and prosper?  I’d say he most definitely did just that.