Eight. That’s how many Unbreakable Kimmy Schmidt (series trailer on YouTube) episodes I binge-watched in two separate sittings across a 48-hour period before I decided I needed a break. It wasn’t because I suddenly realized I was beyond the halfway point of the first season and wanted to maybe prolong the viewing experience. It wasn’t because the show took a sudden downturn in quality. It wasn’t even, perhaps somewhat sadly for me, because I simply ran out of free time. It was because for as much as I have instantly fallen in love with this show damn can it ever be super exhausting to watch, with a joke coming at you every 30 seconds, most of which follow the same basic comedic beat. Moreover, it is an unabashedly live-action cartoon with a general lightness to everything it does, somewhat surprisingly so considering that although it is essentially just a “lady starting over in the big city” show Kimmy’s background involves being sucked into a cult which locked her in a bunker for 15 years to be shielded from the apocalypse.

However, the show seems about as concerned with real world cults as 30 Rock was with a realistic depiction of how a broadcast TV show is made. As a result, sometimes the only thing anchoring you to anything remotely resembling reality in Kimmy Schmidt is either Titus Burgess’ revelatory performance as Kimmy’s hilariously named, delightfully gay roommate, Titus Andromedon, or Ellie Kemper’s star-turning performance in the title role, exuding an endearing optimism which can be a bit much to take in a large dose. That’s part of the reason I needed to take that break, but after nearly 5 days away from the show I finished off the final 5 episodes last night.

That’s where the tricky part comes in. How do I talk about this show’s entire first season considering that Netflix’s all-at-once release model means that we’re not all watching it at the same time or at the same rate? You could be one of the many who have finished the show already, totally confused by my above suggestion that it might be best consumed in smaller doses. You could also have barely finished the pilot, or you could be left somewhere in-between.

It’s all NBC’s fault, really. This was supposed to be their show, a worthy successor to 30 Rock from Tina Fey and Robert Carlock. In fact, it wasn’t until the final week of shooting on the season finale that this went from being a potential savior for NBC’s nearly extinct comedy brand to the latest sure-fire awards contender for Netflix alongside House of Cards and Orange is the New Black. As Tina Fey told TVGuide:

“We were having a somewhat disheartening scheduling meeting with NBC, who liked the show and understood that Ellie was adorable, but they were saying how they weren’t having success launching comedies. So we opened the conversation of letting us talk to Netflix.”

Of course, we shake our fists in anger at NBC for being so bad at their jobs, but in truth Kimmy Schmidt is so freakishly, freakishly similar to 30 Rock in seemingly every way it would have likely faced similar struggles with ratings the 30 Rock always did, destined for the life of a bubble show saved or killed by the number of awards nominations it receives. In the modern TV landscape, its fiercely quirky nature makes it a perfect fit for Netflix, which actually picked it up for a second season at the same time it made the deal to buy the first season from NBC.  According to Kemper, the cast and crew found out they had been picked up for that second season one day before their wrap party for the first season. That’s a level of support NBC was never going to give them.

Where do I start with reviewing this show, then? Well, unlike Kimmy I am a bit of a pessimist. So, let me talk about all of the things that are bad with the first season:

1. Kimmy quickly gets a job as a nanny for the two step-children – a young boy and teenage girl – of a rich socialite housewife named Jacqueline Voorhees and played by Jane Krakowski. As just about every single person on the internet has joked about at this point, Krakowski is just straight-up playing her 30 Rock character Jenna again, this time with a different name. The complete lack in variation of performance is a bit distracting, although only at first, and only, obviously, if you’ve actually seen 30 Rock. See TVGuide’s collection of 12 somewhat superficial GIFs pointing out the similarities.

2. Jacqueline and her two step-children seem to drift in and out of the show for no apparent reason, especially the youngest son who disappears for so long after the second episode I honestly thought the show had simply dropped him as a character. 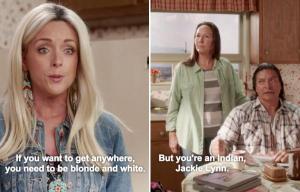 3. Early on, you learn that Jacqueline is secretly Native-American, mostly as a way to explain why she would be okay with Kimmy so clearly keeping a big secret from them. However, the way that particular arc is ultimately resolved is borderline offensive.

4. The teenage girl, Xanthippe (Dylan Gelula), is an entertaining foil for Kimmy, placing an actual 15-year-old girl in opposition to a woman who has the emotional maturity of a 15-year-old. This results in a consistent and hilarious back-and-forth between the two with particularly charged one-liners from Xanthippe being met with often confusing, pop culturally irrelevant, or simply bizarre one-liners from Kimmy, such as, “Hey, Xan, 2099 just called and you’re already dead and wasted all of your life!” However, Xan is too often merely reduced to the girl who comes along to threaten, “I’m on to you, Kimmy Schmidt,” pledging to discover whatever her deep, dark secret might be since the family is unaware of Kimmy’s 15 years in a bunker or even that her last name is Schmidt (they think it’s Smith). At a certain point, they attempt to pivot Xan away from that and rather hastily resolve her arc in the season, to somewhat unsatisfying results. Gelula is so clearly adept at playing the character and nailing the peculiar comic timing of the show that it’s a shame to see the show struggle to figure out what to do with her.

5. The final set of episodes revolves around the court trial for the cult leader who locked Kimmy and 3 other women away for 15 years. The leader is played by a surprise celebrity guest who’d previously been hilarious on 30 Rock, and he’s not the only surprise cameo in the episodes. It’s not so much the cameos that distracts, though, as it is the ramped-up cartoonishness. This is not nor does it claim to be a realistic show, but the courtroom scenes are such a ridiculously exaggerated version of reality that it threatens to push the show too far into pure cartoon territory. The basic joke behind all of it is also basically just a less-funny variation on the same general joke the guest start played out on 30 Rock, which, again, doesn’t so much matter if you’ve never seen 30 Rock.  This is also a personal taste issue as I have read other reviews which argue it is only during this stretch of the season when the show finally hit that next level, but for me when the show needed to show that it could take this even remotely seriously it took everything to the silliest extreme possible, undercutting everything.

Pretty much everything else.

Seriously, I’d say every other part of this show is hilarious and amazing. There’s smart, absurd humor, zippy banter, jokes via funny lines of dialogue, jokes via clever editing/sight gags, Carol Kane is around as a positively batty, yet fiercely loyal landlord, and jaunty music which is forever lightening the mood and reminding you not to take any of it too seriously. In fact, in one episode’s cold open Kimmy turns a TV on to a children’s program with a puppet who seem to actually be responding to and agreeing with what she’s telling Titus, who responds with understandable incredulity, “What channel is this?” But, wait, they take the self-aware humor even higher by having the puppet respond from the TV, “Don’t worry about it” right on cue for Kimmy Schmidt’s opening credits to start. The show is rarely as fourth-wall breaking as that, but there is a general “just go with it” vibe to everything, which you accept because it is all so funny and Kimmy so adorable. As others have argued, Kimmy Schmidt is like 30 Rock if 30 Rock’s main character had been Kenneth Parcell, the NBC page.

Beyond being a “girl making it in the big city” genre comedy, Kimmy is also a fish out of water comedy since Kimmy is clueless about modern culture. The sneaky strength here is that they don’t use this for quite as many “Kimmy doesn’t understand iPhones” or “Kimmy still reads Babysitters Club books” jokes as they could have. But there are still plenty of them, and the childlike wonder Kimmy greets all of this with is adorable. However, there is a darkness to her, and while the show is ever beholden to its cartoon universe it does not back away from the idea that Kimmy’s optimism and cheery veneer is hiding deep-seeded rage and emotional trauma she feels as a result of her 15-year encounter in the bunker.  That’s where the title comes from, though, which is that for as much as she has gone through Kimmy Schmidt is truly unbreakable, a survivor with an admirable resolve and lovable optimism.

1. How did I not talk more about Titus? It is such a cliched role, the sassy and theatrical black gay man, but Titus Burgess makes him oddly lovable, his flair for melodrama making him the perfect comedy partner for Kimmy

2. One of the great things about Kimmy Schmidt being so unabashedly indebted to absolutely anything and everything 30 Rock is that it immediately gives you a litmus test: If you never really liked 30 Rock, you probably won’t like Kimmy Schmidt, and if you’ve never actually seen 30 Rock before and find yourself really loving Kimmy Schmidt then that means you’ve actually discovered two new favorite shows, not one, because as soon as you’re done with Kimmy you might as well start up with 30 Rock, which also just happens to be available on Netflix.

4. Least Favorite Episodes: “Kimmy Rides a Bike!”, which feels like a filler episode