Update 5/8/15: Supergirl and DC’s Legends of Tomorrow (the Arrow/Flash spin-off) have been picked up to series.  Deadline hears that ABC has chosen not to go forward with its Agents of SHIELD spin-off, but they did grant a surprisingly renewal to Agent Carter.

Over the next couple of weeks, all of the networks are going to descend upon New York to give all the major advertisers the privilege of purchasing commercial air time months before all the new shows premiere. It’s a little dance the networks and ad people do every year, made continually more challenging due to the weakening traditional TV dollar since we no longer really have to watch commercials anymore in the DVR age.  Plus, the networks always do their best to make everyone forget that between 66 and 80% of all new shows fail to make it to a second season. But before you get the chance to fail on the air you have to at least make it past the pilot/development stage. We are still waiting to hear if the CW’s weird Arrow/Flash spin-off, ABC’s SHIELD spin-off and CBS’s Supergirl show will make the cut. 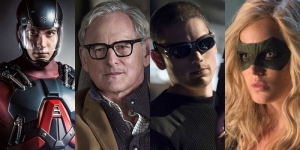 We always knew Brandon Routh’s Ray “ATOM” Palmer was being primed for his own spin-off. There was no way to expect his spin-off to turn into a combined Arrow/Flash spinoff co-starring two Flash villains (played by Wentworth Miller and Dominic Purcell), one-half of a Flash hero (Victor Garber), an Arrow actress whose character is ever so dead at the moment (Caity Lotz), and three DC characters making their live-action debut (Arthur Darville as Rip Hunter, Ciara Renée as Hawkgirl and Franz Drameh as a mystery character). At one point, we heard the show was going by the working title “ATOM,” which was instantly shot down by the producers. Then we heard it might be called “Legends.” Either way, we’ve heard from the very beginning that it would go straight to series and debut at mid-season next year. The Hollywood Reporter is hearing the same thing, claiming the show is “all but on the schedule for midseason.”  According to Deadline, the CW “has a 3-minute presentation ready” for the spin-off at the upfronts.

But why take it from industry trades? Here’s what Victor Garber told Broadway World [via ScreenRant]:

They are going to unveil more details about it soon – I believe they are going to do something for it in May at the upfronts… it’s a spin-off from THE FLASH, which I have been working on for a few [episodes]. To be honest, it is very wild for me that at this point of my life I am now in that world – I am now a half-superhero!

The character I play is half of Firestorm, so conjoined – together – they are Firestorm. It’s been very wild and fun for me to do it… I think it’s going to be a very fun ride. I really honestly can’t tell you much about it except it is completely new and it will involve a lot of interesting people. We haven’t filmed any of it yet – but, it is going straight to series. We start filming in August and it will be on [The CW] in January. 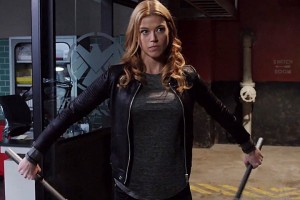 It’s only been in the last two weeks that we first heard news of ABC plotting a potential Agents of SHIELD spin-off centered around two of the show’s newest cast members, Adrianne Palicki’s badass Bobbi “Mockingbird” Morse and Nick Blood as her endearingly snippy, British ex-husband Lance Hunter. The idea is to put them in their own Mr. and Mrs. Smith-esque spy show. The initial reports pegged the spin-off as a near lock for pick-up with the potential for a Ms. Marvel limited series from American Crime’s John Riddley airing during the winter hiatus of Palicki and Blood’s show. Now, THR says that “Agent Mockingbird” (what I’m choosing to call it now) could actually be the one to serve as a bridge show, “Expect to see the Agents of SHIELD spinoff — starring Adrianne Palicki and Nick Blood — to go straight to series, following the same trajectory of the flagship series and Agent Carter. With the latter on the bubble, the SHIELD spinoff could take its place as a bridge show between the first and second half of its traditional season.”

It’s a DC character, it’s being co-created and produced by the guys (Andrew Kreisberg, Greg Berlanti) who co-created and currently produce Arrow and The Flash, yet it’s not airing on The CW? That’s Supergirl, which received a series commitment from CBS last December and has been hounded by “Yeah, but will it cross-over with Arrow/Flash?” questions ever since. CBS and Warner Bros. actually co-own The CW. So, there’s that. Plus, three of Supergirl’s Executive Producers (Kreisberg, Berlanti, Sarah Schecther) are coming to it straight from Arrow/Flash, the fourth EP (Ali Adler) being a former Chuck, Glee, The New Normal writer/producer. Probably not coincidentally, Glee’s Melissa Benoist ended up landing the title role of the show, which currently carries the following plot synopsis:

Twenty-four-year-old Kara Zor-El, who was taken in by the Danvers family when she was 12 after being sent away from Krypton, must learn to embrace her powers after previously hiding them. The Danvers teach her to be careful with her powers, until she has to reveal them during an unexpected disaster, setting her on her journey of heroism

There was recent speculation that CBS was going to pass and maybe move the show over to The CW, but they apparently changed their mind. According to THR, “After early rumors that the DC Comics take from Ali Adler and Arrow/Flash masterminds Greg Berlanti and Andrew Kreisberg was facing trouble (being shopped to The CW), the tide changed after CBS Entertainment chairman Nina Tassler saw the final cut and loved it. The Melissa Benoist starrer was always considered too expensive to move to the younger-skewing network and a pickup could present a larger question for CBS: where to schedule it. Some sources suggested a summer run could be on the table where it could be paired with sci-fi fare like Under the Dome, Extant and Zoo. A summer run could also give the network an edge in the increasingly crowded comic book space, with only AMC’s Fear the Walking Dead expected to set up shop there.”

According to Deadline, a decision must happen soon because the show “has an early pickup deadline.” They’ve also heard that, “Supergirl has been getting solid early reviews, with some suggesting it for the Sunday 8 PM hour.”

So, the current buzz on all three shows is very strong. I still find the Arrow/Flash spin-off confusing, largely because until we hear some actual plot details it can’t help but look haphazardly thrown together right now. I am far more intrigued by “Agent Mockingbird” as a bridge show. I don’t really have a good read on Supergirl largely because on the comic book side of things she’s a bit of a blind spot for me. I have seen the old Helen Slater Supergirl movie, and I remember Laura Vandervoort’s version of Klara on Smallville. However, all of that left me fairly neutral on the character.  For some reason, whenever I picture the show I imagine it looking like the Teri Hatcher/Dean Hatcher Lois & Clark, just maybe Klara & Jimmy. Calista Flockhart and David Harewood’s involvement could help elevate the material the way Jesse L. Martin and Tom Cavanagh have for The Flash.