So, Constantine is officially dead, and I want to talk about iZombie.

That’s just how my mind works. Stick with me.

While promoting iZombie, co-creators Rob Thomas and Diane Ruggiero have repeatedly admitted their goal was to make something very commercial, even though its premise is fairly complicated – medical student-turned zombie-turned-crime-solving-coroner. Ruggiero, in particular, has candidly related stories of having a show on the air, buying a new house and then having her show canceled, suddenly leaving her jobless with a mortgage to pay. Thus the impulse to make iZombie something which will appeal to as many people as possible and stick around for many seasons.

Rob Thomas, for his part, isn’t even a fan of supernatural stories, making him an odd choice to make something about zombies, but Ruggiero is a total nerd-girl for that kind of thing. Plus, thanks to The Walking Dead zombies are hot right now. So, they made a crime procedural which strictly adheres to a brain-of-the-week formula, closely apes the tone of their biggest prior hit, Veronica Mars, borrows from long-running shows like Psych and The Mentalist, and offers a Warm Bodies-esque spin on the zombie story.

The result is a show which doesn’t necessarily feel like appointment viewing, but it’s always watchable and doesn’t really lose you in its mythology, only gradually advancing its major arc pitting the hero against the big bad. They clearly don’t want to worry about their mortgages anymore, and for now, they don’t have to. The CW gave them a second season, only the third Rob Thomas show to make it that far (Party Down got two seasons, Veronica Mars just three). Despite its formula and similarities to other offbeat crime procedurals, iZombie stands out because it feels like something we haven’t seen with zombies on TV before. It doesn’t hurt that Rose McIver is a natural-born Veronica Mars stand-in, or that it was launched behind the final episodes of The Flash’s first season.  Plus, as a CW show there’s simply a lower bar for success.

Maybe that’s what sunk Constantine, which was co-created by David S. Goyer and Daniel Cerone, with the latter acting as showrunner. It was watched by around a million more people per episode than what iZombie is currently pulling in, but on NBC that type of performance is considered a failure. Similar to iZombie, it was clearly made with an eye toward commercial appeal, softening the rougher edges of its source material and reducing everything to monster of the week cases tied together by a central mystery revolving around a tragic event in the hero’s past (which, to be fair, was taken straight from the comics).

That sounds a lot like the first two seasons of Supernatural when the Winchesters were hunting the Yellow-Eyed Demon. Of course, there’s no cap on the number of shows we can have about guys hunting supernatural monsters. Constantine was even paired with another show, Grimm, which fits that description. However, when I watched the Constantine pilot I didn’t leave it wanting to watch more episodes; I simply felt like watching Supernatural again, especially since their version of angels looked so much cooler than Constantine’s. I had generally seen this kind of thing done before, just better.

Constantine didn’t feel particularly distinct, and it was dumped on Friday nights, where NBC has been trying for years to find something to pair with Grimm (remember that Dracula show?). Still, as far as supernatural crime procedurals go Constantine was competently made and perfectly watchable, looking very much like a lower budget show airing on NBC on Friday nights, as the AVClub joked, “You’re not looking for Mad Men on Friday at 9. You’re looking for The Twilight Zone.”  The show’s season-long big bad, the appropriately named “rising darkness,” did at least kind of hook you into wanting to see how everything turned out. Ultimately, the whole thing was carried by Ryan, who perfectly captured the rat-bastard John Constantine we’ve known from the comics. 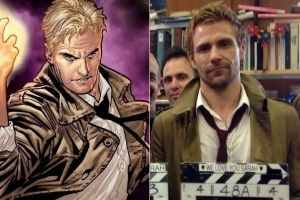 The problem is Constantine is not a particularly likable guy. He was written as an anti-hero in an age where Grant Gustin is reminding us on The Flash how much nicer it is to actually like your central character. On Constantine, one episode opened with John nonchalantly sneaking out the window of a one night stand whose boyfriend had dropped by unexpectedly, and another closed with him heartlessly tricking a friend into being possessed and ultimately killed by a demon. But it’s all okay because that’s just John being John. He’s a tortured soul, his every action ruled by the immense guilt he feels over how thoroughly wrong everything went when he tried to exorcise a demon from a little girl. We are supposed to believe that John only acts like such a jerk most of the time because that’s the only way he can do his job, and his job is to use magic to fight evil and save people, which sounds like an inherently good thing.

All of this is basically true to the comics, but it’s interesting that one of the guys who wrote those comics, Garth Ennis, eventually grew to hate the character, telling Vulture:

“I’ve known a few too many lovable rogue/wide-boy types in real life to find the notion attractive, people who abuse their friends, disappear for a while, then come back and do it again because they know they’ll be forgiven. I’ve no desire to write a character who essentially gets his pals killed and then explains that they were doomed anyway, so why not just spend their lives and use them up.”

Ennis’ summation of Constantine is not wrong, be it in the original Hellblazer comics, the Keanu Reeves movie, the TV show, or what DC is doing with him now.  In fact, within the opening pages of the New 52 Constantine he does exactly what Ennis described – “gets his pals killed and then explains that they were doomed anyway, so why not just spend their lives and use them up.”

DC’s 2015 relaunch, Constantine: The Hellblazer, similarly opens with John giving someone up to bad guys, the female victim calling out, “Do you know what they’ll do to me?  What kind of person are you?” to which an uncaring John retorts, “Not a superhero. That’s for damn sure.” She yells out, “Please! Help me!”, but he’s already turned his back, walking away and smoking a cigarette like a heartless badass, barely even hearing her screams as demons tear the flesh from her body.  But, again, it’s okay because she had it coming to her (not to give everything away, but the demons did have a legitimate beef with her).

That’s just who John Constantine is, and minus the smoking part the TV show pretty well nailed it, even if he did appear to have slightly more of a conscience than his comic book counterpart, depending on which era of the comics you’re talking about.  However, it’s really tough to make a TV show entirely about a brilliant asshole like Dr. House if you don’t give that jerky lead character people to bounce off of. Constantine was never up to that task, providing a supporting cast consisting almost entirely of Zed (Angelica Zedaya) and Chas (Charles Hatford) with occasional appearances from others, like Harold Perrineau’s mysterious angel Manny.

To stick with the House comparison, Chas was the enabler (like Robert Sean Leonard’s Dr. Wilson) and Manny the somewhat impotent authority figure (like Lisa Edelstein’s Dr. Cuddy). That left Zed as the sole audience surrogate, the humanizing presence and exposition machine who could get John to explain himself by openly wondering what the hell was going on, but for some reason Zed was barely around in several episodes. It didn’t help that Chas and Zed sometimes seemed like they might as well have been holding signs reading, “I know I seem really vague and mysterious, but it’s because I have this amazing backstory. Don’t ask me about that, though, because I won’t open up about it until I get my showcase episode near the end of the season.”

If Constantine had survived into a second season, I’m confident they would have returned with a better handle on how to use the characters while maybe even adding some new cast members, ala the way shows like Angel, Arrow and Agents of SHIELD had to tweak as they went to get things just right.  What they did with Anne Marie, John’s “girl who got away” who was so traumatized by the tragedy in their shared past that she became a nun, in the mid-season two-parter was a huge leap forward for them, a compelling reminder of the consequences of their way of living.  There could have been more of that (or of her) in their future.

Maybe I should just sum it all up in a list.

Why did Constantine fail?

Either way, there were those who connected with this show in ways I did not, although I would have absolutely watched a second season if it would have happened.  There was an organized social media effort to try and save it after NBC gave it the axe, and Stephen Amell even oddly promised some kind of Arrow crossover even though you could quickly ask, “Do you have any kind of authority to actually make that happen?  Doesn’t DC need to sign off on that?”

But the show is officially dead. Here’s Cerone’s full statement:

I promised I’d share news when I had it — sadly, that news is not good. The cast and writers of Constantine are being released from their contracts. The studio tried to find a new home for the show, for which we’re forever grateful, but those efforts didn’t pan out. I’m sorry, I wasn’t provided any information on the attempts to sell the show elsewhere. All I can report is that the show is over.

Many ingredients went into this TV series. From the dedicated cast that breathed these characters to life, led by Matt Ryan as the comic-made-flesh embodiment of John Constantine, to the exceptionality talented crew that put unreal images on screen, to the original Hellblazer writers and artists who gifted us a universe.

As a general principle, writers don’t choose a writing career to achieve stardom. Whatever demons or insecurities drove them to find freedom of expression through written words generally keeps writers comfortably obscure behind their words. Nor do people choose writing as a means to financial freedom. I’d venture to guess that most who set out to write professionally never receive a paycheck for their hopeful scribbles or key strokes.

In fact, nobody I know ever chose a writing career — it chose them. You write because that’s what you do. Like breathing, it just happens and you have to do it and you just hope that someday somebody out there notices what you’re trying to say.

If that’s the dream of writers, than the writers of Constantine lived the dream, because we’re leaving behind wild and passionate fans who believe in and were moved by what we tried to do. To leave such a significant, dedicated and active fan base on the table — that’s the real sadness. You all deserve many years of the series we set out to make, and we’re disappointed that we couldn’t deliver that to you. The good news is that Constantine will live on for years in many more forms. But our time as caretakers has ended.

Thank you for letting us in.