I can’t wait to read the the inevitable tell-all book about Marvel Studios awaiting us many years from now because if you believe all the rumors it’s a veritable soap opera over there.

The latest rumor revolves around The Inhumans, the movie Marvel Studios announced in October 2014. At that time, they dated it for November 2, 2018, and as per usual Devin at BirthMoviesDeath nicely explained it to those of us who’ve never read the comics:

The Inhumans are an ancient genetic offshoot of humanity; when they reach maturity they are doused in a chemical known as a the Terrigen Mists, which triggers latent abilities within them. Some are mutated into monsters. Some get incredible powers. Some become essentially crippled. They live together in the hidden city of Attilan, and are ruled by Black Bolt, whose power is that his voice is a weapon of mass destruction. His queen is Medusa, whose hair operates like super-strong limbs. Other characters – good and evil – operate within the royal court of Attilan.

Even if you don’t care about Black Bolt and the entire Game of Thrones style Inhumans universe, the seeds are planted for plenty of new heroes.

And this is where Agents of SHIELD comes in. In the comics, some of the Inhumans broke off from Attilan thousands of years ago and integrated into normal society with humans, intermixing DNA in the process meaning any one of us could be a Terrigent Mist bomb away from having superpowers without realizing it. That idea overtook Agents of SHIELD in its second season, and still looms large over the show’s current season.

That’s what made it so weird when Kevin Feige admitted in interviews last season that he hadn’t actually watched any of the Inhumans stuff SHIELD was rolling out. At best, he seemed vaguely aware it was even a thing that was happening.

ScreenRant took a deep dive into it and found a history of the Marvel Studios people and the Marvel TV people – from SHIELD to Daredevil – sounding surprisingly unaware about what the other was doing. That might seem odd considering that these movies/shows are all supposed to be taking place in the same cinematic universe, but as far as the movies are concerned to this point SHIELD and Daredevil don’t exist. The TV shows, on the other hand, drop all sorts of movie easter eggs, and actually fill in some of the gaps the movies don’t have time for, such as where the heck Age of Ultron’s surprise hellicarrier came from.

Maybe that’s because all of the shows thus far have come in the wake of the movies.  With The Inhumans, for a change Agents of SHIELD was being used to entirely set up one of Marvel Studios big budget movies, laying as much groundwork for the Inhumans as it can without being allowed to get to everything in Attilan.  To some fans, it seemed awesome.  To others, it was really confusing, leading to honest questions like, “Why did SHIELD just introduce the terrigen mist four years before The Inhumans movie comes out?” 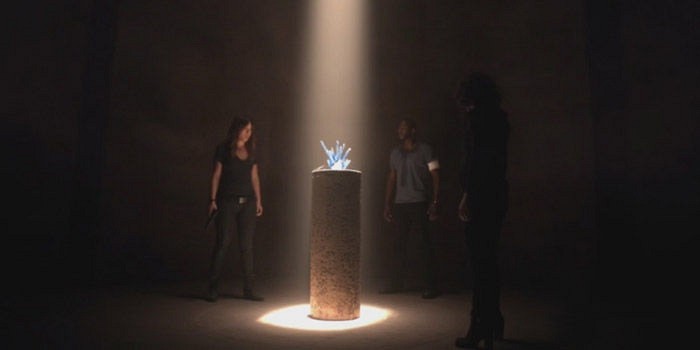 Then, on the eve of this weekend’s New York Comic Con, Disney announced Ant-Man and the Wasp for July 2018 and moved Black Panther up to February and pushed Captain Marvel back to November 2, 2018. That left The Inhumans without a release date, or even an official confirmation that it was still happening. Then the online scoops (and reactions) came flowing in:

Bleeding Cool, reporting straight from New York Comic Con, said, “In the New York bars last night I heard from other well connected sources that the second shoe dropping [after the release date changes for Black Panther and Captain Marvel] will be the move of the planned Inhumans movie off the slate completely.” The reason? A result of the power tug-o-war now that Kevin Feige runs Marvel Studios on his own, and his old boss Ike Perlmutter still controls Marvel Comics and TV.

Hitfix called bullshit, “I’ll state simply that the rumor is not true. I went directly to an unimpeachable source, who told me that the film division is still planning to make the film, and there are certain elements of the Inhumans universe that have been declared off-limits to the SHIELD people as a result.”

ScreenRant kind of called bullshit on Hitfix calling bullshit, “If Inhumans is delayed or canceled, however unlikely, Marvel’s not going to talk about that just yet. They need to ride positive publicity going into the beginning of Phase 3 with Captain America: Civil War, and new seasons of Agents of S.H.I.E.L.D., Agent Carter and Jessica Jones.”

HeroicHollywood said, “Upon hearing the details of that [BleedingCool] report I spoke to a source of my own who commented on said rumor that he referred to as being ‘completely untrue.’ They also added that the reason the film wasn’t in the press release [announcing Ant-Man and the Wasp and the release date changes for Black Panther and Captain Marvel] was due to the line-up change, the film’s release date is currently subject to change. Perhaps the studio has made the decision to move the film about Marvel’s Royal Family to their Phase Four slate?”

BleedingCool now says, “If the Inhumans movie is not cancelled, and that remains to be seen, my only advice to the folks on Feige Island at Marvel Studios is to stop telling the rest of Marvel that it’s done for.”

Verdict: D-R-A-M-A.  All I know is that the scoopers who are usually more trustworthy are saying that the movie is still on, and between the time I started writing this to this very moment The Inhumans has been given a release date: July 12, 2019. So that’s encouraging. As Hitfix said, the moment you see Black Bolt or any of his ilk on SHIELD is the moment you know for sure that the movie has been canceled.