“Beyond Redemption” was a forceful reminder that Captain Lance is still a significant part of this show.  It sure didn’t feel that way for much of the third season when his quest to arrest Oliver and Team Arrow was sandwiched between everyone lying to him about Sara and the mystical hijinks and plot twists galore with the League of Assassins.  Now he is being converted into a compelling cautionary tale.  Prior to “Beyond Redemption,” Oliver looked to Quentin as a quasi-father figure, the moral rock at the center of a corrupt town.  However, when Oliver left town with Felicity last year he made Star City vulnerable.  Faced with crippling budget cuts and dwindling resources, Quentin made a sensible compromise to partner with a wealthy philanthropist, unaware that he was getting into bed with the devil named Damien Darhk.

All of this came to the surface in “Beyond Redemption,” resulting in a role-reversal scene in which Oliver called Quentin out for not being his best possible self.  To Oliver, Quentin serves as a symbolic reminder that even when all seems lost there’s always that incorruptible man trying to save everyone.  He’s the everyday hero that inspires Oliver to be a better superhero, and learning of his apparent corruption by Damien Darhk shakes Oliver’s belief that Star City can truly be saved. A subsection of the town’s own police force is so disillusioned that they’ve splintered off to score multiple drug deals, led by a guest starring Rutina Wesley, all to fund their eventual escape from such a wretched town.

But this is Arrow, not The Wire.  Of course everything culminates in a fight between costumed vigilantes and some nameless bad guys in one of Vancouver’s finest abandoned industrial buildings.  Of course we watch poor Katie Cassidy open her mouth and pretend there’s some sonic scream emanating from her lungs (or, more accurately, the fancy choker around her neck) and try not to laugh.  In the end, Captain Lance delivers a nice speech about honor and morality which motivates Wesley’s character to turn away from sin and convinces Oliver that his initial impulse was right – Star City can be saved, but it needs him now more than ever.

Oh yeah – also, Quentin almost had to kill his daughter as an act of mercy.  Then literally less than a minute after he decided against doing that he was kidnapped by his own cops, thus setting up in the big finale and his big speech.  Busy day for ole Quentin.

Here are 6 random observations about the rest of the episode:

This is the proper way to react when your best friend tells you that he is going to run for mayor despite having no prior experience with politics nor an ability to even articulate his own political views, if in fact he has any:

Of course, by the end of the episode Thea is totally on-board, recruiting an army of interns pretty much overnight and anointing herself as Oliver’s speech writer.  However, I really enjoyed the opening scene when Oliver’s friends applied cold, hard logic to his pie-in-the-sky dream, revealing that he hasn’t thought this through.  Of course, I don’t imagine the show will ever let Oliver answer Diggle’s question, “What kind of platform are you going to run on?”  No, no, no – that’s not the type of detail that’s going to matter for this storyline.  Oliver’s candidacy is just this show’s way of highlighting his growth into a true hero as well as a convenient way to draw him into conflict with Damien Darhk.  He’s going to deliver moving speeches which wrap up all the themes for individual episodes; he’s not going to be talking about his tax policies, and we aren’t supposed to wonder what he’d actually be like as a mayor.

Sidenote: Will they resist the urge to make a Donald Trump comparison at some point?

I really liked the back-to-basics Arrow headquarters the gang had been using earlier this season.  I was surprised to see it written out so quickly.  The main thing I took from the new STAR Labs-designed Arrow Cave introduced in “Beyond Redemption” is that it’s really, really big and has a slight “24 Hour News Station War Room” vibe to it.

3. Um, No, She’s Not Talking “Because She’s Remembering” 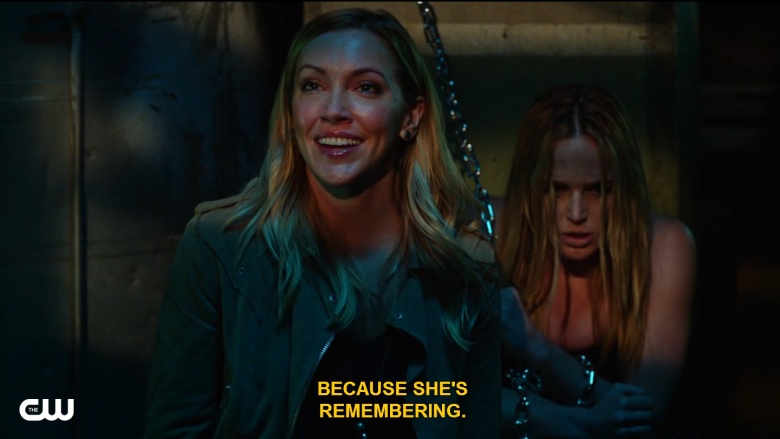 Laurel has Sara chained up in her apartment’s basement, and talks to her the way one would speak to small, dull child (or possibly a dog).  She drags Quentin down there, giving him no warning about what to expect.  He’s understandably horrified to see a version of Sara that is a closer to a feral animal than a human.  Laurel shows her an old family picture and says, “Who’s that?  Who’s that?  Is that daddy?” pointing between the picture and Quentin.  The camera cuts to Quentin cracking a hopeful smile.  Sara mutters her first words, “Who am I?”  Laurel reacts with extreme glee, turning to her dad and excitedly proclaiming, “She’s speaking because she’s remembering!”

It was one of the funniest sequences I have ever seen on Arrow.  The problem was that it wasn’t supposed to be funny.  It’s supposed to be gut-wrenching.

I argued last week that the problem with this storyline is that we aren’t getting any kind of glimpse into Laurel’s thought process, and we still aren’t. Laurel’s behaving in such a clearly deluded fashion that we don’t empathize with her emotional turmoil but instead laugh when soul-less Sara chokes that insane optimism right out of her.

Here’s Vulture’s take on it:

I don’t understand where the show or Katie Cassidy is going with this character. Is this some kind of psychotic break for Laurel? Has she deluded herself into thinking chaining Sara in a basement and showing her pictures will make her all better? (“And this is a picture of me and Oliver. You remember him? You remember how you stole him from me and ruined my life?”) Or is this meant as a sincere attempt to show sister love conquers all? It’s like the show has forgot completely that Laurel used to be a force of logic and principle. And yet the strange thing is Laurel seems perfectly reasonable outside this specific Sara-back-from-the-dead context. I’m hoping for some clarity as this story line progresses, or that it disappears altogether once Sara bolts for Legends.

Here’s what Paul Blackthorne told ScreenRant about whether or not Quentin will question Laurel about all this:

“Well, obviously Lance has got no idea of the nature of the Lazarus Pit, so he wouldn’t know of the risks. It’s only other people within that realm that truly know how that thing works. He wouldn’t have an opinion on that but, obviously what he does see is the result, and the result is a returned daughter in the flesh, but one devoid of soul and spirit, which he can pick up on immediately. That’s the point at which his mind comes into it, not “should it have happened? Why did it happen?” He’s like, “well, this has happened. It’s right in front of me and something’s gone horribly wrong. I can sense it.” So that’s where he comes at it from.”

4. Devastating? Or a Tad Over-the-Top?

I’m probably in the minority on this, but I thought Amell and Blackthorne should have been pulled back just a tad during Oliver and Quentin’s big confrontation.  It was an effective scene, but the fluctuating sound of Blackthorne’s voice along with his frequent little pauses between certain words came off a little hammy to me.  I felt like I was watching an actor play out a big dramatic scene rather than watching Quentin have an emotional breakdown in front of Oliver.  Of course, those are one and the same, but I was more aware of the former than usual.

Because Rutina Wesley was on True Blood as well as on the last season of Hannibal, I feel as if I should give her performance in “Beyond Redemption” special mention.  However, in truth her character is so not the focus of “Beyond Redemption.”  She’s simply a mirror of Quentin – a good and just cop who compromised herself but is still able to return to the right path with the proper motivation.  She’s a villain with a moral code, and she’s also a woman leading a group of angry men.  Wesley did a fine job with the material, but not to the point that it ever pulled focus for me.

6. Did You See Who Directed This Episode?

Lexi Alexander has been among the growing list of female directors who are speaking out about their plight in the male-dominated film and TV industry.  As of this writing, she’s still the last female director to helm a big budget comic book movie (Punisher: War Zone), and this was her Arrow debut.

She gave the people what they wanted: shirtless Stephen Amell back on the salmon ladder!  Or that was already in script, and it was complete coincidence that she drew the straw to direct the episode with that scene in it.  Either way, it was fantastic, but also a refreshing example of how Arrow has absorbed Oliver and Felicity’s relationship into its universe, working in moments of intimacy without dwelling too heavily on it. 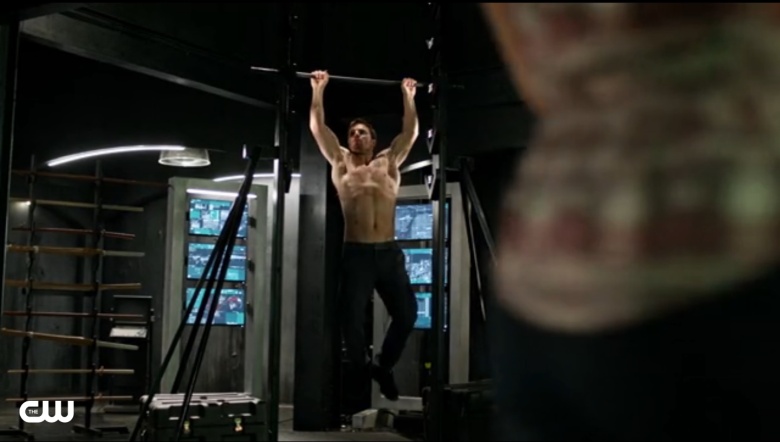 The salmon ladder is back!

And Felicity suddenly has the vapors.