Without Linda Lovelace there would be no Leatherface.

What? What does one have to do with the other?

Long answer: pretty much the same. It really all comes down to the Mob’s money laundering.

However, to truly understand how Deep Throat gave us The Texas Chain Saw Massacre you must first understand why exactly Deep Throat was so popular.  Dirty movies are almost as old as film itself, from short clips of a woman undressing in the early 1900s to the nudist documentaries of the 1950s and 60s.  In fact, the way porn rose in New York in the 1960s into the 70s oddly mimics the early history of film itself – originally viewed in short segments via peep machines, evolved into longer-form via documentaries and then actual narrative storytelling, ended up playing in legitimate theaters and making the kind of money that brought unwanted attention from the mob. 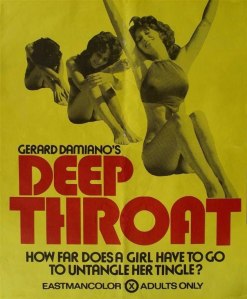 Released in 1972, Deep Throat was in some ways the natural next step forward in that evolution, but it wasn’t so much a single step as it was a quantum leap. This wasn’t some stag film. This wasn’t an 8-minute loop nor an explicit documentary about sexual practices around the world. This was an actual movie – cheaply made, poorly directed and acted, but a movie nonetheless – that also featured hardcore sex.

Naturally, the FBI wanted to kill it, ostensibly for the sake of public decency but really because the mob was the money behind the movie.

Here’s how it worked: The Perainos, deeply connected to the Colombo crime family, bankrolled Deep Throat’s sub-$50K budget, and strong-armed theaters into giving them an unfair cut of ticket sales, threatening physical violence and burning a theater or two down for non-compliance. So, it was appalling to the FBI to see Deep Throat selling out everywhere it played, grossing at least $100 million and perhaps as high as $600 million (more on that in a minute). The Feds tried to arrest anyone and everyone connected to Deep Throat, including its stars, charging them with obscenity. Linda Lovelace turned state’s evidence and testified against her co-star Harry Reems as did the film’s director Gerard Damiano. Hollywood personalities rallied to Reems defense, fearing that if the FBI succeeded in killing Deep Throat it would leverage that into charging overly violent or sexual Hollywood movies with obscenity, which, as it turns out, is exactly what some at the FBI wanted to do.

[It’s only later on, it should be noted, that Lovelace became the centerpiece of the feminist anti-porn movement, rolled out on various talk shows of the era to describe how she’d actually been forced to make Deep Throat by an abusive husband and coked out sleazeballs who greeted her complaints about not wanting to do something in the movie by quietly placing a gun on the table as an act of intimidation. Not surprisingly, pretty much every single other person connected to the movie remembers it differently.]

Deep Throat remains one of the most successful independent films of all time, produced for a mere $47,500 and grossing either $600 million (according to the mob-connected producers) or $100 million (according to Bill Kelly at the FBI) or somewhere between $30 million and $50 million (according to a 2005 Los Angeles Times article).  Either way, there was plenty of money coming in, and the producers weren’t sharing it with anyone, using scary mob tactics to buy Gerard Damiano out of his contractual right to a cut of the profits.

So, how does this relate to Texas Chain Saw Massacre?

The same year Deep Throat turned into a national sensation/controversy, Tobe Hooper was inspired to make Texas Chain Saw Massacre after growing frustrated while shopping in a Montgomery Ward during the Christmas rush, looking longingly at a rack of chain saws in the hardware department and daydreaming about hacking his way out of the mess. How would someone react to a madman wielding a chain saw, he wondered.

Truthfully, he’s told different stories for where his inspiration came from, but the important part is that while the mob was counting its Deep Throat profits Hooper was working with Kim Henkel to write the screenplay for what became Texas Chain Saw Massacre (they originally called it Leatherface). They hustled and flowed their way into securing a $100,000 budget from various Texas financiers, such as legislators, attorneys and even a pot smuggler. It was Hooper’s second time directing a feature film, after an experimental hippie movie called Eggshells, and they filmed Texas Chain Saw for around 32 days in the deep heat of July and August of 1973.  The financiers figured they at least had a good Texas drive-in movie, although Hooper hoped to “build a fire big enough that it would get noticed all the way out in Hollywood.”

That fire was noticed by the wrong people, though.  All of the major studios turned down the opportunity distribute Texas Chain Saw Massacre. Warner Bros., Columbia and Universal wanted nothing to do with distributing what they viewed as a glorified snuff film. There was a new company, Bryanston Films, which had much lower standards, though. Violence didn’t bother them, nor did sex, for that matter. Why should it? Bryanston was run by the mob, with Louis “Butchie” Peraino as the CEO, and it had money to burn thanks to Deep Throat.  Hooper and company got into bed with the devil.

However, if there was a cemetery somewhere in Hollywood for all of the production companies which were set up by people with money to burn only to get chewed up and spit out by the Hollywood machine Bryanston Fims would be on one of the headstones.

The Perainos had no real experience with the feature film business, and they couldn’t exactly announce themselves as the people who had made Deep Throat, a possibly illegal film other companies wouldn’t want to be associated with. They also couldn’t use all of the same old intimidation tactics. So, they substantially overpaid for everything, and everyone in Hollywood was more than happy to take their money and string them along without ever actually getting a single movie made. Bryanston hired all sorts of industry people and gobbled up at least 9 different scripts they intended to turn into movies. They bought the national distribution rights to at least twenty different mid-70s grindhouse flicks, such as Andy Warhol’s Frankenstein, Coonskin, Bruce Lee’s Return of the Dragon and, of course, Texas Chain Saw Massacre. 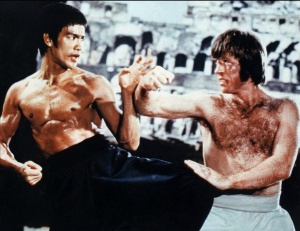 One of the actors from Chain Saw described the Perainos as making the Sopranos look like Boy Scouts. On the other hand, Al Ruddy, the director of one of the films they distributed, Coonskin, found meeting with them to be just like meeting with any other producer interested in distribution, “You never walked in and said, ‘Oh my God, am I gonna get outta this office alive?'”

Maybe that’s because Al specifically met with Joe Peraino. When some of the investors behind Texas Chain Saw went to Bryanston to understand how they movie had made around $20 million and yet their royalty check was for no more than a few hundred dollars, they met with Louis Peraino who nonchalantly claimed the accountant was out for the week.  When asked to show the investors the books, he countered, “You ain’t got the balls to sue me.”

Actually, they did. The investors sued to see their fair share of the profits, but by that point Bryanston had declared bankruptcy after the Perainos were busted on obscenity charges related to the interstate transport of Deep Throat. The legal mess surrounding Texas Chain Saw wouldn’t be cleared up until 1983.

The massive success of Deep Throat and Texas Chain Saw Massacre did give the FBI an interesting tool to use in training exercises. As Bill Kelly has often described, he used to teach police recruits and ask them, “How many of you saw the Texas Chain Saw Massacre?” Inevitably, around 75% of the recruits would raise their hands, and he’d say, “Congratulations. You sent two and a half dollars of your money to the Colombo family in Fort Lauderdale.”