It slightly pains me to say all of that. The moment people like me start anointing Creed the best thing since whatever is the moment expectations start to balloon dangerously, inevitably setting up future viewers to think, “Sure, it’s good, but it’s not that good.” However, sometimes enthusiasm overrides restraint. Sometimes you walk away from a movie feeling so energized that you want to do everything you can to share that feeling with everyone you know. Sometimes a movie, no how matter how predictable its plot might be, reminds you of why you love movies.

Creed, of course, is MGM’s Rocky spin-off, re-launching the franchise for a new generation by turning it over to 29-year-old director/writer Ryan Coogler (Fruitvale Station) and trusting his instincts to tell a contemporary story of a young black man, named Adonis although he goes by Don (the increasingly amazing Michael B. Jordan), who never met his father. In this case, that father just happens to be Apollo Creed, the character so flamboyantly and memorably realized by Carl Weathers in the first four Rocky movie.

The basic story set-up is that Don wants to become a boxer just like his father, but no one in L.A. will train him because no one wants to be responsible for getting Apollo Creed’s son killed. So, he moves to Philadelphia and guilts a reluctant Rocky into acting as his trainer since the lovable, mumbling-prone old man is partially responsible for Don growing up without a father. They train, keeping his lineage a secret (he uses his stepmother’s surname of Johnson), and eventually book a first fight. Then [SPOILER WARNING] he improbably gets a match with the Heavyweight Champion for PR reasons. Talk about déjà vu.

Coogler and his co-writer Aaron Covington (making his screenwriting debut) picked the most logical jumping off point for a Rocky spin-off. Apollo’s death in the ring halfway through Rocky IV is one of the more memorable on-screen deaths of the 1980s, yet the film never properly deals with the aftermath, simply giving Rocky a brief speech at the funeral before going for a nighttime drive and reliving the whole thing via montage. There was plenty of unfinished business from the Creed family’s point of view, rich, dramatic material begging to be revisited. Rocky defeating Ivan Drago and single-handedly ending the Cold War didn’t really do much for the Creeds.

That’s where Coogler and Covington could have gotten into trouble. Rocky IV, often enjoyable for the wrong reasons, is an incredibly lazy cartoon of a movie, with practically a third of its running time devoted to montages. A franchise which had always used grit and violence to disguise its true nature as a Capra-esque fairy tale about the American dream had morphed into absolute schlock. Even with the back-to-basics approach of 1990’s Rocky V and 2006’s Rocky Balboa, the franchise seemed best-suited for regular AMC marathons and on-going parody videos, many of which are devoted specifically to Rocky IV (here’s one, here’s another).

So, how does the guy who made the amazingly intense Fruitvale Station (a sadly prescient, ripped-from-the-headlines movie about the senseless death of a young black man due to the hasty actions of a policeman) make a glorified sequel to Rocky IV? By mostly ignoring Rocky IV and remaking the first Rocky instead, positioning Rocky as the new Mickey, Adonis as the new Rocky and Tessa Thompson’s Bianca as the new Adrian. The plot somehow manages to hit many of the same story beats without ever seeming derivative, and anything we need to know about Rocky and Apollo’s background is explained in the most efficient way possible along the way.

The overall approach Coogler took is perhaps best exemplified in the music he chose to pair with the mandatory training montage prior to the climactic big fight. We watch as Don jogs down a slummy Philadelphia street, his drive and passion gradually inspiring those in the neighborhood to join his run and cheer him on. If you’ve seen Rocky, this scene should seem awfully familiar. However, instead of pairing this inspirational moment with Bill Conti’s memorable score which used a choir to more or less describe the action (“Flying higher!”/”Getting stronger!”) Coogler picked the Nas song “Bridging the Gap.” It starts off with a basic blues beat (dun-dun-dundun), perhaps fooling you into thinking it’s some old Muddy Waters song. Then as Don’s jog gains speed and attracts local teenagers to follow him on dirt bikes, looking like something out of a hip-hop video, the blues beat in “Bridging the Gap” is joined by an extra drum loop and Nas forcefully rapping about the evolution of music and how it bridges the gap between fathers and sons. As the song hits its high point, Don is encircled by his cheering fans, pumping them up by repeatedly beating his own chest and yelling out like a particularly fired up athlete. He looks up to see Rocky smiling and waving from a window above the gym they’ve been using.

That’s what this movie is about: it’s about giving us the blues AND Rap. It’s about bridging the gap between the underdog story of a white guy from the slums that charmed the world in 1976 and the experience of a determined, fatherless young black man desperate to forge his own identity in 2015. It, as Vulture put it, forges an “exciting new path while staying true to its Rocky lineage.” It’s terribly concerned with fathers and sons and legacies. It wants to give the most beaten down among us something to live for again. It’s surprisingly focused on people who are doing the best they can despite their built-in expiration dates. Don’s boxing skills will inevitably erode and his body will break down, just as Rocky’s has. The remarkably likable Bianca is a singer with progressive hearing loss meaning she will someday be deaf. However, they all push forward, one day, one song, one punch at a time.

What Creed isn’t about, though, is boxing. Sports movies, in general, are rarely actually about sports. For example, League of their Own isn’t about baseball; it’s about the bonds between sisters and a brief window in time when society was forced to unshackle women from domesticity. Even this year’s Southpaw isn’t about boxing; it’s about a fighter learning how to be a father to his daughter. In this kind of story, a climactic final match doesn’t mean anything if there aren’t loved ones in the good guy’s corner and cringing while watching from the crowd. The sporting event is secondary to what it represents to the main characters, and Creed adds further layers of metaphorical meaning to the boxing through a mid-story plot twist that had me wiping away tears. 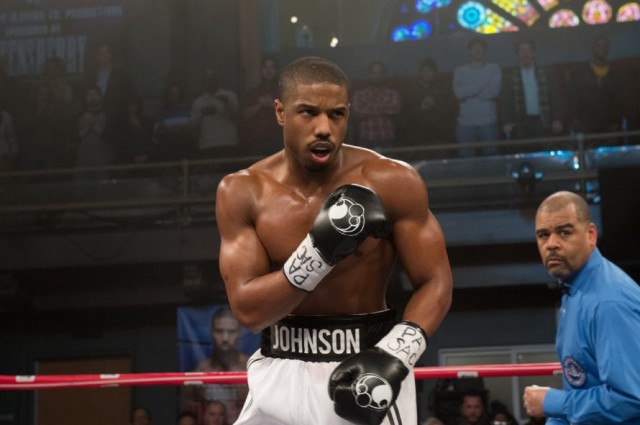 That being said, the actual boxing scenes in this movie are infectiously entertaining. I haven’t been more overjoyed after any single scene of a movie this year than I was when, as Vulture described, “The movie stalls on the brink of the first big fight when Adonis tells Rocky to unlace his gloves quickly because he suddenly has the shits. We haven’t stopped giggling over that sly bit of myth-busting when Maryse Alberti’s camera starts following Rocky and Adonis and their entourage into the ring — and the shot is held and held and held, a bravura piece of cinematography and fight choreography in which the camera moves in and out, in and out, dancing and swerving along with the boxers.” Ala Birdman, the entire first fight is done as a continuous shot, from the entry to the ring to the declaration of a winner, and it is truly edge-of-your-seat material, the perfect combination of form and story. The climactic fight features a wider variety of camera angles and cuts, but it is thrilling enough that everyone in my half-filled theater let out a collective gasp after an apparent knock-out punch lands out of nowhere.

If the film has a weakness it might be the villain, Ricky Conlan, the Lightweight Champion, a British thug with anger issues in need of a final payday before most likely serving jail time for some vaguely described reasons. He’s portrayed by Tony Bellew, an actual three time ABA champion making his film debut, and, not surprisingly, he’s immensely convincing in the ring. Outside the ring, he’s reliably intimidating but not overly compelling, unlike the incredibly charismatic Carl Weathers as Apollo in the first Rocky. To be fair, it might only be in comparison to the legendary Apollo Creed that I find Ricky Conlan wanting.

Everyone else in the movie is uniformly great, with particular praise reserved for Michael B. Jordan and Sylvester Stallone. There are scenes with those two that just break your heart, and there are scenes with those two that will have you laughing out loud. Stallone frequently threatens to steal the movie with the surprising power of his performance and the absolute charm he exudes, having successfully found his way back to what made Rocky so likable in the first place, but Jordan is always a more than capable scene partner, giving as much as he’s getting.  It’s not hard to picture Stallone walking away from this with multiple award nominations, if not wins.

Rocky’s had surrogate son figures before, usually at the expense of his own biological son, like in Rocky V and Rocky Balboa, but it’s always been a story told from his point of view. Creed flips the script, and presents an exhilarating combination of street-level storytelling and Hollywood fantasy where corny things occasionally happen, people fall in love and the underdog gets a shot to metaphorically work through his demons.  The old champ (Stallone) still has it, but the up and comers (the director, Ryan Coogler, the star, Michael B. Jordan, and the love interest, Tessa Thompson) have tantalizingly bright futures.  In the present, though, they all deserve a standing ovation.