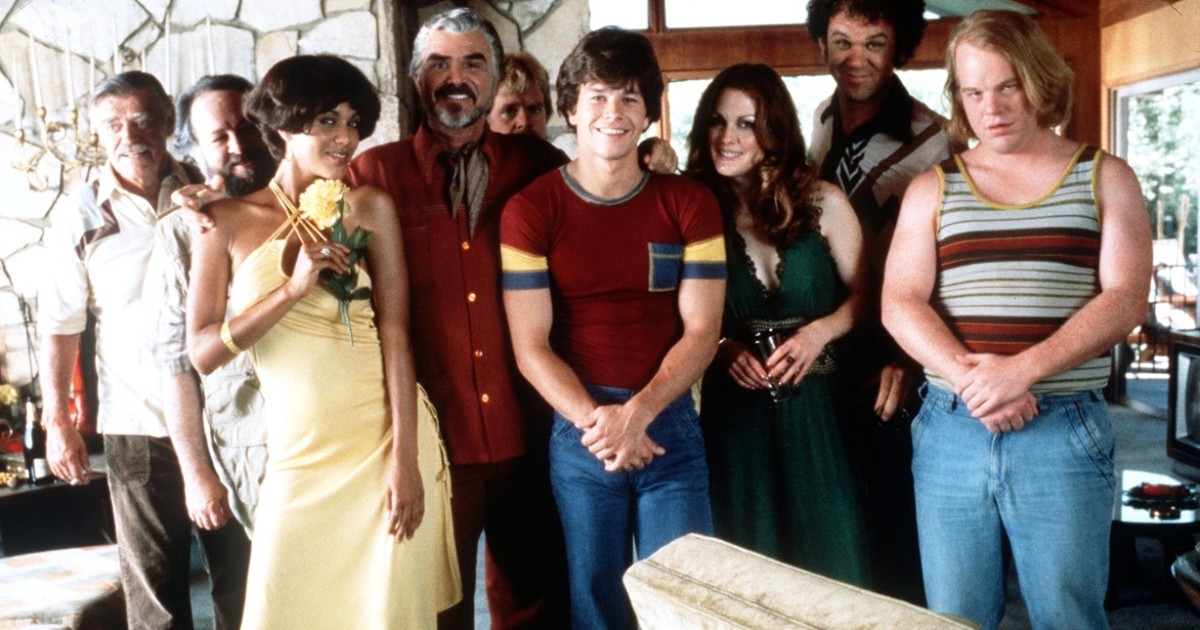 When Burt Reynolds recently appeared on The Late Show With Stephen Colbert, the starstruck host reflected on the actor’s iconic status and exclaimed it was such an honor to meet him because, well, “You’re Burt fucking Reynolds!”

Indeed. Reynolds was once the premiere icon of American masculinity, the rare film star who appealed to everyone – boy or girl, young or old. That was a long time ago, though. Now, he’s pushing 80 and out there promoting his new memoir But Enough About Me, more than happy to take one last victory tour. Just don’t get into too big of a rush to include Boogie Nights in any kind of super cut of his career highlights. That film may have netted him his one and only Academy Award nomination, but he’s always hated it.

Funny thing about that: so does the guy he played in the movie.

Boogie Nights tells the fictional story of Eddie Adams (Mark Wahlberg), a well endowed, hopelessly naive young busboy who runs away from his emotionally abusive mother and straight into the outstretched arms of Jack Horner (Reynolds), a kindly old adult film director who is a bit of a star-maker. Under Horner’s tutelage, Eddie becomes “Dirk Diggler” and quickly finds acceptance, family, and wild success.

Reynolds objected to all of that. He disapproved of the subject matter. He didn’t understand his character, later disdainfully comparing him to Father Knows Best in his Golden Globes acceptance speech. He disliked the director (Paul Thomas Anderson, making his second movie) and even took a swing at him on set. He fired his agents for putting him in such trash. Even when Boogie Nights turned into an awards contender, his half-hearted campaigning arguably torpedoed any chance he had of winning the Best Supporting Actor Oscar.

Two decades later, Reynolds’ stance on Boogie Nights hasn’t softened. Talking to The Guardian, he admitted he “hates” it even though he’s never actually seen it. He’ll never work with Anderson again, who apparently offered him a role in Magnolia despite all the tension on the Boogie Nights set. In a separate interview with GQ, Reynolds further elaborated on the generational divide which was clearly at the heart of his feud with Anderson:

“I think mostly because he was young and full of himself. Every shot we did, it was like the first time [that shot had ever been done]. I remember the first shot we did in Boogie Nights, where I drive the car to Grauman’s Theater. After he said, ‘Isn’t that amazing?’ And I named five pictures that had the same kind of shot. It wasn’t original. But if you have to steal, steal from the best.”

What stealing from the best – Scorsese’s Goodfellas, in this case – looks like:

But since Boogie Nights is more or less an unofficial John Holmes biopic Horner’s experiences with Diggler most closely corresponds to Bob Chinn, the longtime adult film director who had the displeasure of watching Holmes go from a young, skinny, and kind of shy kid to a deadbeat druggie at least somewhat responsible for the horrific Wonderland murders. Just like their fictional counterparts, Holmes and Chinn made a series of hardcore private detective movies – in which Holmes always played Johnny Wadd, which is actually referenced in Boogie Nights – but had to abruptly cut off their partnership when Holmes’ drug abuse got out of control.

So, what did Chinn think of Boogie Nights? The Rialto Report asked him that a little over two years ago:

I knew nothing about the film [prior to its release], and was surprised when my ex-wife took me to see it.  I was even more surprised by the obvious parallels between myself and the Burt Reynolds character […] They say that imitation is the sincerest form of flattery, but the way it parodied what I had done, when [Anderson] recreated those scenes from my films, making me out to be some kind of incompetent, rank amateur, was somewhat of an insult.

He’s not wrong. Boogie Nights pretty consistently portrays Horner and his crew as self-deluded amateurs who have fooled themselves into believing they’re making something worthwhile. Upon the film’s release, many in the adult film industry seized upon that same point, arguing Boogie Nights made them all out to be jokes. (Other industry veterans from that era, it should be noted, argued the contrary and defended Boogie as entirely accurate.)

The recreations Chinn referenced come in the section of the film where Julianne Moore’s character shows Dirk the documentary she’s made about him. Much of this is lifted shot-for-shot from the actual documentary Exhausted: John C. Holmes, the Real Story, right down to the clips from two different Bob Chinn-directed Johnny Wadd movies. Dirk and Jack sitting in the editing room and disagreeing over who’s really in charge is lifted from John Holmes and Bob Chinn having that same exchange in Exhausted.

Holmes had long since been dead by the time Boogie Nights came out. AIDS finally got him in ’88. That’s also roughly around when Chinn stopped directing adult films. The success of Boogie Nights and resulting resurgent interest in all things Holmes led to a comeback, though, and soon enough Chinn was back on set directing a series of new Johnny Wadd titles with a different star. He kept at this for a while before retiring again in 2003.

So, Boogie Nights was not all bad for the world of Bob Chinn, obviously. However, seeing his work so faithfully recreated by Paul Thomas Anderson hurt. Why didn”t anyone at least give him the heads up that they were doing that? Why not contact him to see if he would consult on the movie? Why go to Ron Jeremy for that job and not him? Who better to ask about playing the Jack Horner to John Holmes’ Dirk Diggler than the man who actually lived through it?

Given all of that, Chinn wasn’t exactly quick to forgive Boogie Nights’ various oversimplifications:

Sadly, it’s a totally inaccurate depiction. Some of the fictitious characters he came up with make the industry seem much worse than it actually was.  I like to believe that most of us were serious and professional, even though most of us were working on it with such low-budgets the results may appear to be amateur and threadbare, but at least we had spirit and imagination. The characters in Boogie Nights were all about money, and while we were about money it was not the main thing I thought. I think the way the industry is shown in Boogie Nights is more like it was when the video revolution took hold in the 1980s, and any backyard amateur with a camera could become a director and virtually anyone could start up a video distribution company.  These were the people who were interested in the money.

The irony here is everything he just said sounds a lot like Jack Horner, thinking back to his infamous mid-movie speech, “Wait a minute. You come into my house, my party, to tell me about the future? That the future is tape, videotape, and not film? That it’s amateurs and not professionals? I’m a filmmaker, which is why I will *never* make a movie on tape.”

Maybe Burt Reynolds is too close to all of this to be able to appreciate his work in Anderon’s movie. The same might go for Bob Chinn. That’s understandable. Still, Boogie Nights was recently voted as the 8th best film by Times Out. While making a joke out Jack Horner’s self-deluded incompetence might annoy Chinn, it ultimately doesn’t detract from what is now considered a classic.