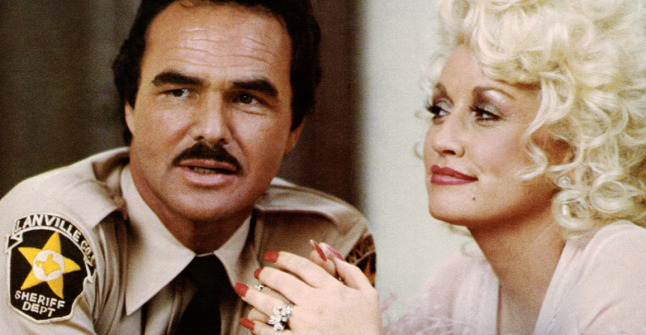 Burt Reynolds died today. Here’s my story about the one film of his I’ve seen more than any other and how long it took me to realize what exactly all those colorful women and football players were singing about in that delightful little Texas house.

If you’re old enough, you probably have a Burt Reynolds story. I don’t mean the Bill Murray kind where you randomly ran into him on the street one time and he was delightfully bizarre. No, I mean you have a story about some Burt Reynolds film, performance, interview, SNL impression, or otherwise which intersected with your life at one point. We are, after all, talking about a man who was once the most popular actor in the world, the first since Bing Crosby to be Hollywood’s top-grossing star four years in a row (1978 to 1982). If you grew up in that time period, chances are Burt made his way to the background noise of your life, whether you liked it or not.

Burt’s biggest films – Deliverance, The Longest Yard and Smokey and the Bandit – actually predate me. When I was old enough to actually know anything about actors, Reynolds was already on the downside of his career, the kind of sad figure chasing after his faded star in vehicles like Cop and a Half in which he’s the grizzled old cop with a new partner – an 8-year-old kid! Ah, the 90s.

Then, later in the decade, there was the post-bankruptcy, anything goes Burt debasing himself as a horndog southern Senator in Demi Moore’s Striptease and vying for respectability in Paul Thomas Anderson’s masterful Boogie Nights, which netted him an Oscar nomination. Too bad he hated the film, but I’ve already written all about that.

Way, way, way back before all of that, though, Burt was just the cockey epitome of 80s cool grinning his way through the Cannonball Run movies my older brothers loved so much. Those were fun, sure, but my heart had already been sold to the lady in the black dress singing from the footsteps of what I mistook to be a quaint Texas town.

I present to you none other than The Best Little Whorehouse in Texas:

Jumping ahead in the story a little bit, here: Good gawd! How did I not know any better? How did my dad let me watch that? This is a movie whose own title was so salacious by 1982 standards that they couldn’t even say it in the TV commercials:

From 1905 to 1973, Texas had its own brothel, called the Chicken Ranch, located just outside of La Grange. Oh, it was totally illegal. It’s not like we’re talking about Nevada here. But the Texas authorities agreed to look the other way. As a result, the brothel became a local institution, frequented by notable types like politicians, soldiers, and college football players. Texas A&M University fraternities would send freshman there every year to be initiated (into manhood, I suppose).

Then in 1972 the state Attorney General secretly deputized a local television reporter to raise plenty of noise about the brothel on TV as prelude to officially shutting it down. This was after the Fayette County District Attorney refused similar orders since no one who actually lived near the Chicken Ranch seemed to want it gone. Eventually, the state AG got his way and the Chicken Ranch was quietly closed. Efforts to prove it was connected to an organized crime ring flamed out, but, in the end, it was an illegal brothel. There was no real legal leg to stand on.

This story became the basis for the 1978 Broadway musical The Best Little Whorehouse in Texas, which was nominated for six Tonys, including Best Musical. It won two (for Best Actor and Actress). Four years later, Universal Studios left behind most of the musical original performers in favor of a big-name film adaptation starring Dolly Parton as the Head Madam and Reynolds as the local Sheriff she’s been getting, um, friendly with. Tommy Tune, who directed the Broadway version, was replaced with 9 to 5 director Colin Higgins.

The result was the highest-grossing musical of the 80s, topping the likes of Annie and Yentl. Dolly got another #1 out of it thanks to a re-released version of her 1974 hit “I Will Always Love You.” Plus, she gained a new obligatory inclusion on any of her Greatest Hits compilations with “Hard Candy Christmas,” a carryover from the Broadway original given a faithful treatment in the film but alternate recording for the soundtrack featuring Dolly singing both verse and the chorus. The song has since become a Christmas favorite, but how many remember what it was originally about – prostitutes lamenting the closing of their whorehouse.

The film eventually found its way to my dad’s VHS collection, and I took to it like everyone’s little kid took to Frozen 5 years ago. I just always wanted to be watching this movie…this movie whose title I wasn’t allowed to say. I knew not of this so-called Best Little Whorehouse. No, what I watched was Best Little House because it’s what I legitimately believed the title to be after my dad called it that.

“Thank God he’s not old enough to read yet,” my dad probably thought on more than one occasion.

I now have my dad’s old VHS copy. The title is as plain as day:

I’m not sure why I adored the film so much. It might be no more complicated than, well, it was the first musical I ever saw. People randomly breaking out into song? What kind of messed up world is this! I love it!

I was only 4 or 5, after all. I barely remember any of this. Stories of my obsession with the film passed into family legend, my dad and brothers joking about me watching Best Little House, happily dancing along with those college football players who visit the brothel mid-movie, totally oblivious to not even the subtext of it all but the outright text – they didn’t put “Whorehouse” in the title for nothing.

But, I think I responded to it the way I did partially because at the time I viewed Dolly and Burt as being so wholesome and fun:

However, there was always something about Burt’s on-screen presence which put me at ease, whether he was laughing his way through a zany comedy, putting his heart into an Oscar contender, or just taking on certain films as an excuse to get close to a new leading lady. Even the admittedly bizarre sight of him singing and dancing alongside Dolly Parton made me feel happy. Reportedly, the two did not get along at all, but at 5 I had no idea and at 35 I still can’t see much sign of their off-screen friction.

After my Best Little House fever, I moved on to other movies and didn’t think much of it, always regarding Best Little House as my first favorite movie. It would be another 8 years before I actually saw Best Little Whorehouse again. I was gobsmacked. “Dad, these guys are having sex with these women, and you used to let me watch this all the time!” I remember yelling. “Yeah, I was wondering when you’d figure that out,” he laughed.

And that’s how someone like Burt Reynolds can enter our lives. Some actors deliver performances which legitimately change lives. Others toil on the edges and provide underappreciated windows into the human condition. Yet others transform their profession and industry.

That wasn’t my experience with Burt. Instead, he was the guy in that one movie I saw way too young and took way too long to figure out what it was really about. It became a running joke in the family, and in that way Burt has been a co-star in some of my favorite childhood memories.