Ah, Christmas. It’s the time of year when families get together, presents are wrapped and unwrapped, and there are always chestnuts roasting on a open fire. On the other hand, Christmas can be a time of despair and increased suicide rates, and even the happiest Christmas stories have an element of melancholy beneath their sparkly lights surface. I’ll admit, Christmas loses some of its luster with age. I go to see family around the holidays, but now it feels like I’m always in danger of losing something, that this is a moment I need to try and hold on to. An increased awareness that we don’t go on forever always adds an extra layer of pathos to Yuletide cheer. Maybe that’s why the best, to me at least, Christmas-centered stories acknowledge the conflict between the feel-good nature of the holiday and the inherent melancholy that inevitably exists.

For those kinds of stories, I often turn to TV shows, which used to trade almost exclusively in particularly cheery Christmas episodes.  However, in my TV-viewing lifetime more modern TV shows have immensely expanded the range of potential stories that could be told with a Christmas theme.  Using 1990 as my cut-off year, here are my top 10 Modern Christmas Episodes:

While initially thought of as Twin Peaks-lite, Northern Exposure centered around a group of quirky misfits who made their home in the small town of Sicely, Alaska. While it was often unfairly compared with that other quirky, small town show, the similarities were only surface-level. Twin Peaks was sinister and strange, while Sicely, Alaska seemed warm and inviting. It was a story of outsiders who sort of created their own families in a town where no one was watching.

Their Christmas episode centered around Maurice, probably the least sympathetic citizen in Sicely, and the reveal that he has a Korean son he never knew about. He begins the episode in a state of depression, because he believes he must face another Christmas without a family. Instead, he finds he has a family, but it’s not exactly as he had hoped. Around the edges of this story, everyone is attempting to celebrate the holidays in their own way, adapting to their environment and missing everything they left behind. The desire to both celebrate the new and mourn the lost is as perfectly Christmas as a series can get. 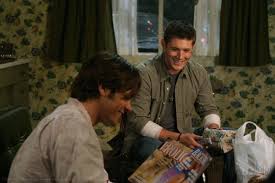 Taken from Supernatural’s truncated 3rd season, “A Very Supernatural Christmas” centers on Sam and Dean hunting a creature who is coming down the chimney and kidnapping individuals as pagan god sacrifices (as one does). The reveal that the pagan gods appear as though they stepped out of Leave it to Beaver add a brilliant, dark comic streak to the episode. However, what gives the episode its heart comes from, as it always did in the show’s early goings, the relationship between brothers Sam and Dean Winchester. Dean is due to die in a few months (it’s complicated) and wants to celebrate his last Christmas. Sam can’t bring himself to celebrate, because he can’t get past the fact this will be his last Christmas with his brother. It’s an effective blend of the macabre and the sentimental that the show was always capable of at its best.

8. “Christmas Comes but Once a Year,” Mad Men 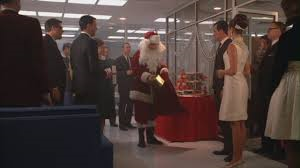 Mad Men’s 4th Season presented a Don Draper beginning to no longer be able to keep his demons in check.  While a Christmas party goes on in the office (and Roger plays Santa Clause!), Don drinks to excess, makes mistakes, and sinks to new lows, while Peggy takes a leap in her relationship. If Christmas is a time for exorcising one’s demons and planning new beginnings, Don Draper shows it’s also a time in which one can sink deeper into despair and self-loathing. Happy Christmas, everyone!

Among the Doctor Who Christmas specials, It was a bit of a dilemma whether or not to choose this episode or Matt Smith’s “A Christmas Carol.” However, this one gets the edge because of what it says about Christmas and the reasons we celebrate the holidays. Have Christmas get-togethers ever been better summed up than they are here in this episode, with the line, “Every Christmas is last Christmas.” This episode, despite the appearance of Santa Claus is not overtly-Christmassy. Instead, it features monsters that put you into a dream state while they quietly digest you. What it totally nails, however, about the holidays is the fear that this will be the last time you will ever be able to get together with that person, and the poignancy of passing time. Granted, “A Christmas Carol” does that too, but in a way that’s more abstract and less relatable. Both episodes are great, but something about this one just works for me. Christmas is a time to treasure loved ones because it may be the last holiday you’ll share. It turns scary and heartbreaking, with a brilliantly uplifting ending.

For a town that was as celebration-heavy as Stars Hollow, it’s surprising the series didn’t do more Christmas episodes. It had winter and holiday-themed plotlines, but only this episode felt truly, explicitly Christmassy.

At their Christmas party, Lorelei’s estranged father, Richard, collapses and is rushed to the hospital. It’s an episode about how these three strong, flawed female characters (Lorelei, her daughter Rory, and her mother, Emily) will cope with this potential loss and the fear that so many unsaid things will remain unsaid. For a show as dialogue-driven as Gilmore Girls was, it’s the silent beats that really resonate here.

It’s Christmas Eve and Scully has presents to wrap, but Mulder would rather explore a fatality-heavy, haunted house. Eventually, they both find themselves trapped inside, psychoanalyzed by the two residing ghosts about how miserable their lives are, and really they should just kill each other and be done with it. After all, Scully’s greatest joy is proving Mulder wrong, while Mulder’s only happiness is dragging Scully where he knows she doesn’t want to go. What follows is a character exploration of Mulder and Scully, some narrative trickery, and a lovely, sentimental ending featuring Mulder and Scully unwrapping each other’s presents. Awww. 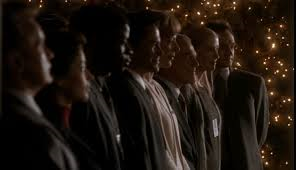 West Wing wore its liberal, optimistic heart so prominently on its sleeve, it’s practically part of the material on its immaculately tailored suit. Here, though, its Christmas sentiment feels appropriate and beautifully melancholic. When Toby discovers a homeless veteran died wearing a coat he’d donated to charity, he becomes determined to ensure the man receives a proper funeral. Yes, it’s as manipulative as Hell and yes, it’s way too optimistic for its own good, but try not to be moved when that choir sings “Little Drummer Boy.”

See? Not every episode I love is sentiment and despair heavy. Here, we’ve got my favorite 3o Rock Christmas episode, in which Ken tries to teach everyone the meaning of Christmas, only to have it spectacularly blow up in his face. Meanwhile, Jack fumes because his mother was able to make it to New York to visit him/ make his life a living Hell, and Liz Lemon’s family good cheer is ruined when reality seeps through their gleeful facade. It’s Christmas at its most laugh-out-loud, cynical best.

2. “What to My Wandering Eyes,” Parenthood 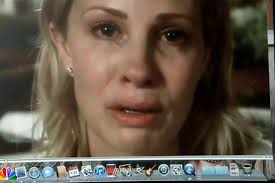 Christmas is a time when shameless sentimentality is acceptable, even encouraged, and Parenthood brings us one of the best examples of this. It’s Christmas, and Christina is struggling with chemotherapy and trying to ignore an illness coming on. Instead, she ends up in the emergency room and eventually the ICU as an infection overwhelms her depleted immune system. Adam prays, the family grieves, her daughter comes home from college to see her, and a video message is found on a computer that will crush the soul out of even the most heartless of viewers. It’s Christmas at it most beautifully sentimental.

My mom’s favorite Christmas movie is It’s a Wonderful Life. She could probably reenact it, if required. It’s not uncommon to love that film, but what’s often missed is how grim it is, how much despair the central character endures before his light at the end of the tunnel. It may extol faith in mankind’s inherent goodness, but it’s just as much about how bitter one can feel believing that life’s chances have passed you by. This third season episode of Buffy the Vampire Slayer mines much of the same territory, though it’s more of the “terrible life” variety.

Vampire-with-a-soul Angel is plagued by ghosts that torment him with memories of every terrible deed he performed when he was just a soulless vampire. Driven to suicide by his demons (both literal and metaphorical), he’s saved by fate rather than circumstance in an ending that is lovely and heartwarming. In the end, it’s not Buffy, his forbidden true love, that saves him, but the natural world itself deciding that he needs to endure.

So, what are some of your favorite Christmas episodes? Let us know in the comments!