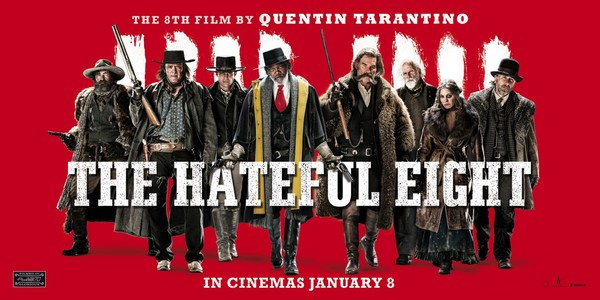 The Hateful Eight is tale told by a self-appointed genius, full of sound and fury, signifying…something?  I add the question mark because after having thoroughly enjoyed The Hateful Eight I was left thinking, “That was fun, but what was the point of it all?”  When a movie is nearly three hours long, uber-violent, excessively profane, overloaded with impeccably written monologues, and released just in time for Oscar voters to finalize their ballots, you want to feel like it all amounts to something.  Surely there has to be something more to The Hateful Eight than Quentin Tarantino simply doing a B-movie genre riff, right?

That’s sort of his specialty, but in recent years he’s pursued higher ambitions.  For example, Django Unchained is his riff on the spaghetti western, but it’s also an obvious African-American Civil War revenge fantasy the same way Inglorious Bastards is a Jewish WWII revenge fantasy.

Hateful Eight, on the other hand, is more or less a parlor-room mystery that’s not nearly as mysterious as it thinks it is.  It’s set in the old west, but it’s not really a western.  It pays lip service to post-Civil War racial tensions and gender politics, but it doesn’t follow through on that as much as it could.  It has the moment-to-moment energy and dynamic dialogue so unique to a Tarantino project, yet the film itself seems smugly aware of that.  It was shot in Ultra Panavision 70mm, which is best suited for outdoor scenes to showcase the format’s uniquely wide aspect ratios, yet it largely takes place inside a snow-blocked cabin.

The counter-argument, though, is so what – so what if The Hateful Eight is simply here to entertain us with its version of an Agatha Christie story as told by Quentin Tarantino?  Maybe the ever-opinionated auteur learned his lesson after insultingly and repeatedly implying that Django Unchanged had somehow solved racism.  Maybe with The Hateful Eight he just wanted to tell a good story.

Okay. That would imply Tarantino is actually capable of learning humility, which is probably never going to be true.  However, for the purposes of paragraph transitions just go with me.

So, the real question is this: Does The Hateful Eight actually tell a good story?

Its set in the mountains of Wyoming several years after the Civil War, opening on a snow-covered cross in the foreground as a six-horse stagecoach slowly progresses through the snow.  A new Ennio Morricone score blares through the speakers, growing louder the closer the stagecoach gets to the screen. Morricone’s impressively foreboding synthesizer is warning us that some bad shit is about to go down; these people just don’t know it yet. 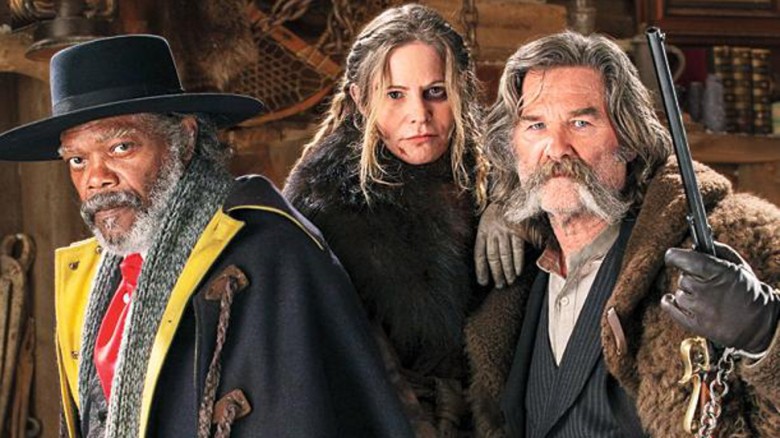 We then gradually meet the characters, starting with the occupants of the stagecoach – the bounty hunter John Ruth (Kurt Russell) and his prisoner Daisy Domergue (Jennifer Jason Leigh), a feral lady worth $10,000, dead or alive, when delivered to Red Rock.  As the stagecoach’s benevolent driver O.B. (James Parks) discovers, their path on the road is blocked by Maj. Marquis Warren (Samuel L. Jackson), an African-American bounty hunter in need of transport for both himself and the three dead criminals he’s hauling to town to collect the combined $8,000 bounty.

We understand the tension immediately from the way Ruth treats Warren, e.g., forcing him to go through multiple steps to verify that he means them no harm.  We also understand that everything we are watching is building up the suspense and mystery.  It turns out Ruth had a meal with Warren when their paths happened to cross earlier in the year, but, wait, is that mere coincidence?  Is Warren actually there to steal Daisy to claim the $10,000 for himself?  Do we really believe his story that his old horse simply couldn’t make it in the snowstorm?  Has he truly never heard of Daisy before now?

Just as we’re getting to know them, another unexpected stranger – Chris Mannix (a scene-stealing Walton Goggins), a former Confederate soldier claiming to be the town’s new replacement sheriff – requests passage on the stagecoach.  We then go through the same process of noting the odd coincidences and improbable personal histories, attempting to identity the “who” in this “whodunit” before anything’s actually happened yet. 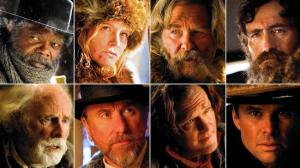 To escape the encroaching blizzard, they all stop at Minnie’s Haberdashery where they meet a standoffish Mexican (Demian Bichir), a surly Confederate general (Bruce Dern), a Britishman claiming to be the hangman heading to Red Rock for Daisy’s execution (Tim Roth) and a cowboy returning home to see his mother (Michael Madsen).  The actual owners of the Haberdashery are nowhere to be found, having apparently entrusted day-to-day operations to the Mexican until they return, and the door oddly needs to be nailed shut every time it is opened because something unexplained happened to the handle and latch.

They’re all going to be stuck together in that cabin for several days while they wait out the blizzard, and Ruth quickly decides that at least one of them isn’t who they say they are.  As the audience member, you have to decide if he’s being paranoid or if there really is a snake (or multiple snakes) in the grass.

Alliances are quickly formed.  Mannix is quick to cosy up with the Confederate general; Ruth and Warren make a “Watch my back, I’ll watch your back” pact.  Daisy works in as many put-downs of her captors as she can, at least as many as they’ll allow before punching her mouth shut.  The mysterious misfits who were already in the cabin when Ruth got there remain mysterious and largely silent.  The suspense builds at a purposefully slow pace.  The first body doesn’t drop until the 100-minute-mark, preceded by another epic Tarantino-penned, Samuel L. Jackson-delivered speech.  The body count does add up rather quickly from that point forward, but it also includes a Pulp Fiction-esque flashback.  The Morricone music is used rather sparingly, and the violence becomes a tad predictable.

So, is it a good story?  It’s actually a very basic story – strangers meet on a road, go to a cabin where they meet more strangers, have to figure out who to trust. Tarantino plays it as a slow-burn, and expertly stages the various interactions at Minnie’s, although among the titular Eight it ultimately feels like only half of them are actual characters as opposed to props.

Ultimately, Tarantino paired a bunch of his typical actors together with a couple of new ones, encouraged several of them chew the scenery (Russell and Jackson in particular), and more or less sold us a western that turns out to be a glorified play where everyone in the front row would have to take precautions to avoid the inevitable splatter.  There may not be much depth here, but if you are attuned to Tarantino’s sensibilities the entertainment factor is remarkably high.

The Hateful Eight is tale told by a self-appointed genius, full of sound and fury, signifying…holy crap, did you just see that guy’s head explode!  That was so cool!

That’s the level this movie operates on – it starts out western Shakespeare, veers toward Agatha Christie and ends a bloody, but fun mess.