What a difference a new Star Wars, Jurassic Park and Avengers movie makes.

In 2014, overall domestic box office hit its lowest level since 2011 and actual attendance plunged to a paltry 1.27 billion, the lowest since 1995.  Thanks in large part to the record-setting efforts of The Force Awakens and Jurassic World, the domestic box office rebounded in a big way in 2015, hitting an all-time high in year-end gross with $11.13 billion.

However, all is not necessarily well in Hollywood.  Attendance was up 5% over 2014’s dismal showing, but movie theaters still sold fewer tickets in 2015 than they did in either 2013 (the year of Frozen) or 2012 (the year of The Avengers).  Plus, that $11.13 billion year-end gross is remarkably top heavy.  Seven films – Force Awakens, Jurassic World, Age of Ultron, Inside Out, Furious 7, Minions, American Sniper (which technically came out Christmas Day 2014) – grossed over $300 million domestic in 2015, one more than the five which did it in 2012, the prior high water mark for that specific benchmark. As a result of so much wealth concentrating at the top, the second, third and fourth-tier movies were left fighting each other for air.  As Fox’s distribution chief Chris Aronson said to Deadline, “There wasn’t enough depth at the box office (in regards to titles); there was too much business tied to few movies, instead of more movies.”

I’ve written at length about the death of the mid-budget film (like here), and the pessimistic view of 2015’s decline in the $50m-$99m and $100m+ grossers is that it’s going to be that much harder in 2016 for smaller movies to get made at the budget and marketing levels they want/need. For example, STX Entertainment is a new China-backed studio which specializes in mid-budget movies, and in its first year it’s already learned that spending a little money on a movie with known stars (The Secrets in Their Eyes, with Julia Roberts, Nicole Kidman and Chiwetel Ejiofar, only made $20m) is a riskier bet than simply picking up a micro-budget Jason Blum-produced thriller like The Gift, which made $43m off a $5m budget. 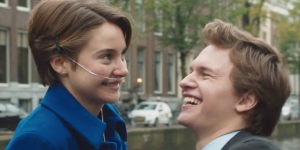 Acknowledging the obvious, Paramount Worldwide Distribution and Marketing President Megan Colligna told Deadline, “Smaller to mid-size movies have become a challenge.”  However, Aronson had a more optimistic view, “The movies weren’t good enough. That’s all.  We are one year removed from The Fault In Our Stars. Let’s not give up on the modestly budgeted film yet.”  Just because Paper Towns didn’t hit this year doesn’t mean another Fault in Our Stars couldn’t happen.  However, in the larger scheme of things this on-going challenge to mid-budget movies has made life more difficult for producers, one of whom told Deadline (off the record) that Oscar-caliber films she used to take to major studios are now being routinely dismissed and instead embraced by TV networks (broadcast, pay and streaming) just as long as the film in question can somehow be changed into a TV series.

You were pretty much cool with all of that if you worked at Universal (Jurassic World, Furious 7, Minions, Pitch Perfect 2) or Disney (Cinderella, Age of Ultron, Ant-Man, Force Awakens), which combined to account for 44% of the market share.  However, the times were hard elsewhere in town.  As Deadline pointed out, “Four major distributors –-20th Century Fox, Sony, Lionsgate and Paramount– saw double digit declines between -10% and -36% at the domestic B.O. vs. 2014.”  For that matter, it’s not like Disney and Universal were somehow immune to their own disappointments [see: Tomorrowland and The Good Dinosaur for Disney and Steve Jobs for Universal.]

Franchises like Ted, Magic Mike, The Maze Runner, Divergent, Taken, Paul Blart and Alvin and the Chipmunks either withered with age or flamed out entirely whereas intended franchise (re)starters like Fantastic Four, Terminator: Genisys, Jupiter Ascending and The Man from U.N.C.L.E. (which I liked) launched little more than disappointment.  Then again, Kingsman: The Service Service  earned a sequel, and the Rocky, Mad Max and Star Wars franchises are officially back.

The October-December awards season crunch arguably cannibalized itself, producing one or two bonafide hits (The Martian, Creed), a couple of tweeners (Bridge of Spies, Sicario) and a whole bunch of others fighting for scraps (Danish Girl, Carol, Trumbo, Brooklyn, Spotlight, Suffragette, 45 Years, Youth, Grandma, Truth, The Walk) and some where its too soon to tell (Joy, Hateful Eight, Concussion, The Big Short). 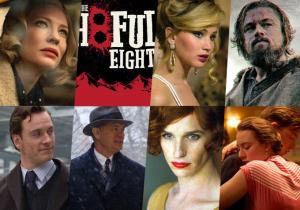 Harvey Weinstein found this so annoying that he penned an op-ed in The Hollywood Reporter pleading with his rivals to spread their releases out more evenly, i.e., put more awards contenders outside of the traditional awards window.  Harvey’s distribution chief, Erik Lomis, agrees, telling Deadline, “I think we need to spread the titles around more instead of jamming them into the late third or fourth quarter, that’s where a lot of adult-themed films get cannibalized. We need to take a beat and realize that we can get the same recognition at different times of year.”

If things are so tough for the non-big budget movies, then why don’t the studios try to experiment with different release patterns?  Paramount did and it was a disaster.  They picked Paranormal Activity: The Ghost Dimension and Scouts Guide To The Zombie Apocalypse as the guinea pigs in an experiment wherein the theatrical window for each film would be shortened thus hastening their arrival on VOD.  It wasn’t a day-and-date release like so many micro-budget movies try, but instead a “As soon as we fall below a certain number of theaters we’ll start the clock for a very quick countdown to the VOD release.”  To sweeten the pie, Paramount offered to cut the participating theater chains in on the VOD revenue, but most theater chains refused to participate on principle, effectively killing both movies as theatrical endeavors.

Why not embrace change?  Well, an anonymous distribution expert summed it up for Deadline:

“Shrink the window and you change both consumer perception of how long they have to wait as well as the calculation as to whether it is worth seeing it in theaters or not. Anyone who predicts day-and-date for major releases is talking out of their hat. It doesn’t work. The revenues just aren’t there.”