Even if you’ve never seen 1976’s The Omen you probably already know about its big twist. Similar to The Sixth Sense, the grand explanation at the end of The Omen is just one of those things you pick up over the years through cultural osmosis. You might remember watching an early South Park episode where an evil kid named Damien moves to town and seems to be followed by Jerry Goldsmith’s iconic “Sanguis Bibimus! Corpus Edimus!” musical score wherever he goes. Maybe you’ve just watched Netflix’s Omen parody Little Evil from Tucker and Dale director Eli Craig. There are countless other parodies and examples I could name.

The point is, The Omen has penetrated our pop culture consciousness. It’s now the type of film where people regularly refer to especially devilish little kids as Damien without fully realizing that’s actually an Omen reference. But once upon a time, The Omen was just a Rosemary’s Baby/Exorcist knock-off about a series of mysterious deaths surrounding a seemingly innocent little boy. It was a huge hit in its day, big enough to spawn two direct sequels within 5 years and help usher in a run of similarly themed films, but when watched now The Omen is robbed of a considerable amount of tension. Still, it’s justifiably considered a horror classic, and if you somehow don’t know what the twist is it’s a damn good one.

Gregory Peck, who partially took the role as an I-need-a-distraction-right-now coping mechanism after the death of his son, plays Robert Thorn, a wealthy U.S. diplomat. We first meet him just outside a hospital delivery room, conferring with a shady priest to arrange a hasty adoption. His wife Katherine (Lee Remick) has just suffered a miscarriage but doesn’t know it yet since the pain knocked her unconscious. Hoping to spare her any further trauma, Robert agrees to adopt a newborn boy and pass it off to his wife as their own son.

Five years later, Robert, Katherine, and their little child Damien are a happy family. Robert’s just received an ambassadorship that has him on the fast track to the White House. While the possibility of someday becoming First Lady intrigues her, Katherine’s also just happy being a mom who throws the biggest and best birthday parties for her son. Damien…well, Damien doesn’t actually do or say much. He almost never talks because Harvey Stephens, the kid they cast to play him, had a thick working-class accent that didn’t make sense for the son of a well-off family. So, he mostly just flashes his patented death stare while crazy shit happens around him.

Everyone? Horrified. Damien? Meh. Been there, killed that.

That’s generally how the entire film goes. The bodies really start to pile up through mysterious circumstances, and Damien’s continued nonreactions leave us to wonder what the heck is going on. Take him out of the equation, though, and it plays surprisingly similar to a Final Destination movie where an unseen power continually sets the pieces in motion to bring about one accidental death after another. The fun mostly comes from seeing exactly how each person is going to bite it, and even though the film is over 40 years old a couple of the death scenes still shock.

The project came about, like so many other films throughout history, from shameless imitation. Producer Harvey Bernhard (The Mack) saw the monumental success of 1973’s The Exorcist and decided the market was ripe for further devil child cinema. Screenwriter David Seltzer took the supernatural eeriness of Rosemary’s Baby, the tease-and-reward structure of Jaws, and a particular passage from the Bible’s Book of Revelations as inspiration and came up with the story. Every studio in town passed on it before Warner Bros. gobbled it up and sat on it for a year (while making The Exorcist II instead) before letting Fox take it from them. Richard Donner, primarily a TV director at the time, ended up behind the camera, and more overtly supernatural elements in the script, like covens and hooved creatures, were removed. 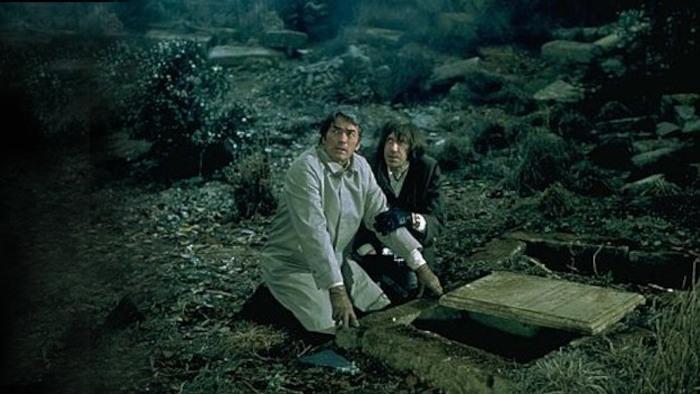 The goal was to play it straight, ground the film in reality, as much as possible at least, and make something that could somehow appeal both to horror fans and to older Gregory Peck fans. Looking back on it, Fox’s head of production Alan Ladd, Jr. told Reel Terror, “Putting Gregory Peck and Lee Remick in it, you’re saying to people right off the bat this is not a normal horror picture. It was scary, but it was classy scary.”

Which, really, is the best description for it: The Omen is “classy scary.” Another word for it would be “stodgy” and a bit challenged to string together its exposition sequences. But Omen definitely feels like it’s been classed up to be worthy of Peck and Remick’s efforts, and while it was born out of Exorcist imitation it doesn’t have much in common in terms of execution. Damien never pulls a Regan and turns into something demonic. There’s no spider walking, vomit spewing, or head turning. From beginning to end, he’s just a little kid who doesn’t really understand why people keep dying around him. That’s the idea, at least. There are a couple of moments where Stephens’ ominous stares betray a darker intent.

Through secondary characters, we get a basic explanation of what might be happening, but it takes Peck far too long to accept the truth, resulting in a pretty harrowing finale. It’s still a bit of a trip seeing the man who once played Atticus Finch attempting to [spoiler] kill a small child.

It’s a fine enough ending and film on its own, but what really elevates The Omen is Goldsmith’s Academy-winning score. As The AV Club argued, “Because Donner insisted on not having anything explicitly supernatural happen on screen (undercutting The Exorcist instead of trying to one-up it) Goldsmith’s music had to stand in for the malevolent forces guiding Damien toward his destiny.”

If you like your horror a little more explicit and steeped in down and dirty B-movie charms, this might not be the title for you. However, if you enjoy a moody mystery, startling deaths exquisitely filmed, and the existential dread of a father growing to fear his own son then The Omen is one horror classic that still holds up, even if you already know the big twist.

All four original Omen films, including the 1991 TV movie spin-off, are currently available on HBO Now.

Next Up: Damien: The Omen II largely repeats the first film’s formula but with a pre-teen, more self-aware version of Damien at the center. It’s not as good, but is at least watchable? And is Sam Neill the only reason to watch The Final Conflict?