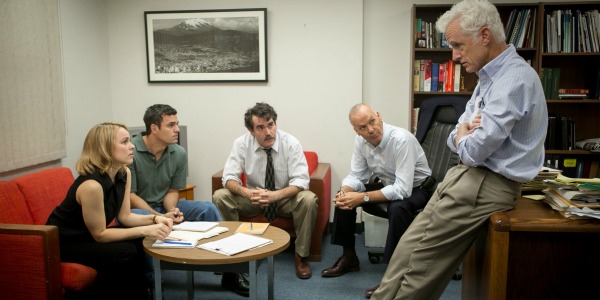 There’s a moment in Spotlight in which editor Walter Robinson (expertly played by Michael Keaton) confronts defense attorney Jim Sullivan (Jamey Sheridan), who represented the Catholic Church in several sexual abuse allegations, wondering how he could have defended pedophiles over and over again despite knowing nothing was changing and the crimes were continuing to pile up. “I was doing my job,” Sullivan responds. “Yeah,” Robinson retorts, “you and everyone else.”

That exchange cuts to the heart of the dilemma surrounding the major players in Spotlight, Tom McCarthy’s devastating, but engrossing examination of the Boston Globe reporters who revealed the sex abuse scandal that shook the Catholic Church to its core. This is a film in which everyone has a job that must be done, and it’s a job with ties to the Catholic Church. The film functions as an indictment of both the powerful men who instigated the cover-up and the supporting players who enabled the abuses to continue.

It starts in Boston in 2001. Every facet of the city, from the police to the newspapers, is inextricably linked to the Catholic Church. The Boston Globe happens to be undergoing a change in leadership, with editor Marty Baron (a terrific Live Schreiber) taking over. When he sees a potential story in the sexual abuse allegations leveled against local priests he assigns the Spotlight team to probe, meeting some initial resistance since they’re all skeptical that the Boston community will really relish an airing of the church’s dirty laundry. Still, they investigate what they think will be a small scandal. Instead, the entire team is stunned when they realize how deep the corruption actually goes. It is expected there may be as many as 10-12 priests in the Boston area. Instead, they find nearly 90, and a scandal with international repercussions.

Director Tom McCarthy has long since proven he is an actor’s director, be it with The Station Agent, The Visitor, or Win-Win (only the Adam Sandler vehicle The Cobbler is an unquestionable failure). He frequently manages to get star-making turns from under-the-radar character actors. Here, he’s given a predominately A-list cast, but an A-list cast of actors who often defy expectations.  It’s immediately obvious that there is a perfect melding of right stars, right director.

In addition to Schreiber and Rachel McAdams, Mark Ruffalo, as reporter Michael Rezendes, does career-highlight work. He receives the meatiest, most emotional material, which is likely why he was picked over Keaton for an Oscar nomination. But, it’s a nomination that’s well-deserved. It sometimes disheartening to think his most high-profile role is a CGI monster. It undermines what a compelling, idiosyncratic presence he can be on screen. Brian Darcy James (best known for his theatre work and the best-forgotten TV series Smash) gives a quiet, emotionally resonant performance as investigator Matt Carroll, who makes a horrifying discovery about how close to home the scandal may be. Stanley Tucci as Mitchell Garabedian, the only defense attorney willing to take on the Catholic Church (as he’s an outsider who feels no obligation to “play nice”), creates a quirky, volatile, but compassionate character. He’s always a welcome presence on screen, and here is no exception. 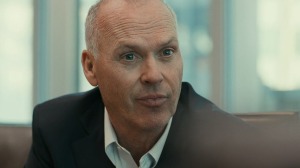 I mentioned Michael Keaton earlier but I just want to emphasize how good he is in this role. He walks that fine line between avuncular boss and stern taskmaster. When facts about his own potential culpability emerge, he has the perfect mix of anger and regret, making the character sympathetic, because he has been a part of the very system his team has been working to topple. Keaton has always been such an interesting, mercurial performer. Birdman reminded us last year what a captivating screen presence he can be; Spotlight reminds us how nice it to have him back.

The sexual abuse of children by priests is common cultural knowledge at this point. So much so, that the impact of the investigative team’s conclusions may feel diminished by time. However, at the dawn of the 21st century, the Catholic Church was still seen as an untouchable institution. Spotlight, while not overly emotional, makes certain to emphasize what a shattering blow such a scandal is to those who view their faith and their church ties as indistinguishable from one another.

There’s a small moment in which Spotlight reporter Sacha Pfeiffer (a well-cast McAdams) nervously watches as her church-attending grandmother reads the story her granddaughter has been researching so tirelessly, knowing how devastating these revelations will be. The wordless look her grandmother gives as she scans the account says all that needs to be said about the importance of the Catholic Church in the average Bostonian’s life. It’s a small, quietly devastating moment in a film of many devastating moments. The film is never mawkish or saccharine. There are no over-powering musical cues and minimal emotional outbursts. There’s almost an emotional detachment in the film that makes the discoveries and victim accounts feel more palpable.

Spotlight exists in a world of muddy colors, dingy lighting, and driven obsessives balancing their desire for a story with their emotional viewpoints. In other words, it’s probably the best portrayal of reporters working within a newspaper since David Fincher’s Zodiac. Films about journalists so rarely get it right. That’s why we celebrate the films that do. There’s a temptation to make reporting and investigating seem glamorous and exciting. Instead, as the best films about the inner workings of a newspaper realize, it’s a world of scrounging for a story that will resonate and slightly hating yourself as you force others to pick at emotional scabs for the betterment of an investigation. The Spotlight team is determined to break the scandal once they begin to dig through the corruption, but they are always aware of the emotional price of such a story. These cover-ups will potentially damage an institution many in Boston see as essential to their daily lives.  That awareness will not deter them from breaking a story they believe must be shared with the general public, but they know the toll it will take. They also slowly become aware that they may be part of an institution that has been just as complacent in the cover-up as those they are hounding. In the world of Spotlight, it’s the silence that is the most demoralizing and deafening. It’s a love letter to journalism, but not an idealized, rose-colored view.

The story is ultimately one of muted triumph. It exists as a victory for the power of true investigative journalism, but that triumph is always tempered with regret. The entire team laments these events have been allowed to continue for as long as they have, that the story wasn’t broken sooner. After all, the evidence isn’t really hidden all that well. It’s been practically under their noses for some time, but no one had the interest in connecting this particular group of dots. That’s what makes the film’s narrative so compelling. They undertook groundbreaking investigative journalism, but much of the team simply regrets no one discovered it sooner, that so many lives were irrevocably damaged. After all, Spotlight exists in a world of complacent corruption, where a lied agreed upon is preferable to an acknowledged truth. It’s a film of suspense, but also a human-interest drama. It could step wrong at any second, make a character too obviously villainous or obviously virtuous, but it never does. It harkens back to a time in which newspapers could be relied on to shed light on stories others would prefer to keep in the dark, and when journalism was a respected medium. It succeeds because it focuses on the human element present on both sides of the scandal—a micro-examination of a macro-level event. It is, without a doubt, one of the year’s best.