That was fast. Legends of Tomorrow, this crazy Frankenstein’s monster version of a superhero TV series, wasted no time following through on its promise to thin the herd. As the showrunner Phil Klemmer told THR, “Very early on, we were talking about how do you establish the stakes particularly when you have time travel in the mix? There’s always the possibility of the audience disengaging because with time travel, they can just go back in time and undo this or change that. We felt it important to really establish the stakes early on to submit exactly what it was our characters were facing.”

I’ll get into the solution they came up with after the following:

They killed off Hawkman/Carter Hall, who didn’t realize that when wielding an ancient, mystical Egyptian dagger against your mortal enemy you’d better read the ultra fine print beforehand. Turns out, they had the right dagger, but it will only kill Vandal Savage if Hawkgirl is the one doing the stabbing. That’s information Hawkman probably would have loved to have known before he ran at Savage with the dagger and ultimately ended up being turned into [wait for it] hawk filet.

We pause for a moment to pay our respects to anyone who actually liked Hawkman or Falk Hentschel’s performance.

With that out of the way, good riddance, Hawkman. In the brief time we’ve come to know you through Arrow/Flash and the Legends of Tomorrow pilot, we’ve already concluded you were just taking screentime away from more compelling characters/performers. Your death instantly opens up so many more story possibilities for Kendra, who had already exhausted that business of “I’m destined to love Carter, but I want to have my own choice, dammit!” It gives the team something to rally around. As Snart says, he didn’t know Carter from Adam, but if you kill a member of his crew you make things personal. Plus, the loss of Carter and his centuries of memories puts everyone on equal footing (well, other than Rip, the actual time traveler).

It’s an old trick, this business of killing off an assumed cast member as early as possible (anyone remember Buffy the Vampire Slayer‘s Jesse?). Legends of Tomorrow is such a strange show, though, that killing off Hawkman doesn’t mean quite as much because we know Carter will just be reincarnated again whenever Kendra dies, unless she kills Savage first at which point we have no idea what will become of the spell keeping the Hawk couple alive across the centuries.

All of that will no doubt have a huge impact on the rest of the season, positioning Kendra as essentially the world’s youngest/oldest widow, but in the here and now “Pilot Part 2” gave us a better idea of how this crazy show will operate. They team will follow a lead about Vandal Savage at some point in history, screw things up because they don’t yet know how to work as a team and splinter off into groups to clean up their collective mess.

In this case, they infiltrate a 1975 warhead auction for terrorists, which is the type of meeting where to make a bid you simply shoot your gun in the air (made me laugh every time). To their surprise, Vandal is not on hand as a buyer, but instead he is the seller behind the auction. Dr. Stein, Snart, Mick and Sara draw too much attention to themselves, sniffed out by Damien Darhk (Arrow‘s current big bad who is also kinda immortal, appearing in a cameo). The gathered terrorists turn to kick some interloper ass only to realize, “Holy shit. Does that guy have a freeze ray? And does that other guy have the world’s smallest, most efficient flamethrower? Whoa, did you see that inch-high man in a robot suit shooting energy beams at us?” And right around then is when that hypothetical terrorist would be knocked out by always badass Sara Lance.

Vandal makes the classic “You can’t catch me and defuse this atomic bomb at the same time!” move, totally unaware that Firestorm can just fly the bomb to a isolated territory and absorb all of its atomic energy, burning the hell out of the surrounding woods but ultimately harming no one.

And that is when the title card for this episode finally arrived. The show’s pilot lacked in the action department, but “Part 2” makes up for it. In fact, there is another awesome full-team fight sequence at the end of the episode as well. As io9 put it, “With Heat Wave and Captain Cold slinging the elements, Ray Palmer knocking out henchmen with 1mm haymakers, White Canary doling out roundhouse kicks, and Firestorm delivering his own brand of nuclear justice, these fights are crazy, chaotic, and insanely fun to watch.”

In-between the two big action setpieces, the episode paired our characters off into three groups. Part of Ray’s suit came off during the fight with the terrorists, which Vandal found and will reverse-engineer to move up his world domination, turning Central City into a burning crisp in 2016. They have to stop that from happening. Ray, Mick, and Snart head to Russia to retrieve the dagger which can kill Savage. Jefferson, Sara and Dr. Stein hunt down the 1975 version of Dr. Stein to steal a device only he had which can be used to track the missing part of Ray’s ATOM suit. Meanwhwile, Kendra and Carter hang out on the ship to think back real hard to their days in Egypt when Kendra was among the few people in the world who could read the engravings on the dagger.

It’s an episode which plays its timey wimey card in two different places, recognizing that with a team this size the chances for accidental changes to the space time continuum are greater than usual. Ray’s accident could mean the end of the world, but to clean it up Dr. Stein inadvertently erases his own history with his wife. Thankfully, Rip steps in to fix that, although maybe it would have been avoided in the first place if Rip had done anything else in this episode other than hang out on the ship and wonder why no one was following his orders. 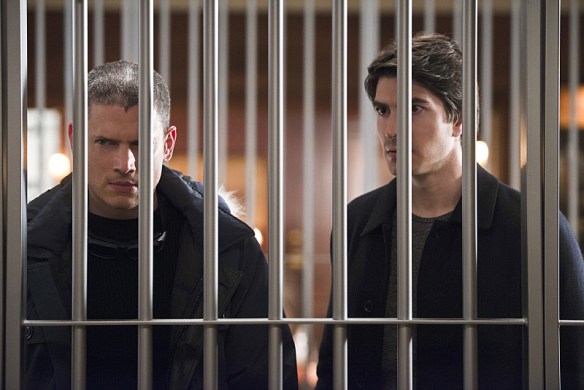 This is the first real proper episode of Legends of Tomorrow, and it doesn’t instantly make up for this show’s central flaw of gathering together a bunch of characters who have no real connections to each other. Only time can fix that. We need to see these people together for more episodes, and the writers need to keep trying odd couple pairings to find surprising fits, like how Ray and Snart bickered throughout “Pilot Part 2” before reaching something close to mutual respect. Plus, it was just good comedy to see Dudley-Do-Right Ray Palmer royally screwing up a simple house break-in much to Snart and Mick’s annoyance.

On the other side of the episode, Dr. Stein and Jefferson grew closer together, making their way through plenty of 70s jokes and lines like, “I do not partake in the cannabis.” Sara also theoretically grew closer to both of them, but since she was mostly there to distract the young Dr. Stein this wasn’t really her episode. However, with a cast this size you get the impression that whereas “Pilot Part 2” found plenty of time for Dr. Stein the next episode or the episode after that could have plenty for Sara but little for Dr. Stein. We’ll take what we can get as the show still figures out what it’s doing, but “Pilot, Part 2” gives me more hope that they’ll crack the code with this show soon enough.

1. If they had failed to save the future would next week’s episode of The Flash just have been 45 minutes of burning Central City rubble?

2. Where the heck was Rip for most of this episode?

3. After Heat Wave and Captain Cold stand back-to-back and let loose on the poor bastards around them, you’d expect expect to see some actual people on fire and others frozen into blocks of ice. Yeah, that didn’t happen.