“Mulder and Scully Meet the Were-Monster” is the X-Files episode so nice we had to review it twice. Kelly’s a casual X-Files fan. Here’s his review. Julianne is a hardcore fan. The following is her review:

Three episodes in, and I’m starting to feel that problematic mix of elation that The X-Files is back on the air and angst that it only has three episodes left in its limited run. As far as the series’ quality so far, I’d call the premiere (appropriately entitled “My Struggle”) problematic, episode 2 (“Founder’s Mutation”) a marked improvement, and episode 3 (the one listed in the title) a prime justification for the series’ current existence. It’s not just that this episode feels so lively and energetic after two weeks of grimmer, mythology-adjacent episodes. That’s part of it, but not all. What makes the episode shine is that it does, though perhaps in a way that is sneakier than viewers might have liked, comment on contemporary life through the shifting lens of Mulder’s and Scully’s perspectives.

Granted, it does this in obvious ways, such as referencing transgendered individuals and Mulder’s’ difficulty with his camera app, but also does so in ways that are craftier, less apparent. One of the criticisms of this current iteration of The X-Files involves its reluctance to really tackle contemporary paranoia. It makes references to Edward Snowden, 9/11 Truthers, and government surveillance, but actually the series could just as easily be set in the late 90s as it could in 2015. Its focuses are still aliens and the same government conspiracies that always made up its mythology.

In a way, I think it’s probably smarter to not directly base its conspiracies on current government anxieties, as doing so assures the series will be instantly dated, a time capsule curiosity more than an enduring, quality hit. However, I understand the frustration that a series which focused so much on paranoia towards one’s government doesn’t confront these issues more directly. What tonight’s episode does is smarter, actually. It examines how such a series can exist in these times, as well as ponders why humans refrain from lying down on a train track.

First let’s look at the way writer Darin Morgan presents the X-Files cases themselves. After its cold open, the episode takes us back to Mulder’s office, as he throws pencils at his iconic “I want to believe” poster, showing contempt for his once-held philosophy. Mulder’s having a bit of an existential crisis, as it turns out that many of those cases in which he once believed so passionately are now, in the age of quick internet research, revealed to be either outright hoaxes or easily explained phenomena (or, as he cynically puts it, “probably just ice”). Scully functions here as his cheerleader, trying to rekindle his enthusiasm for every crazy, monster story that ever came his way, but he’s not having it.

This weathered, more cynical Mulder addresses an issue that has been at the heart of the character since the beginning: Mulder has always wanted to be a skeptic, but he’s too much of a dreamer to actually be one. After all, one cannot “want to believe” and “trust no one.” Mulder can be lied to, manipulated, and used over and over again, but he’ll dive back in with renewed vigor as soon as someone claims they can finally show him “the truth.” Heaven knows what would happen if someone actually gave him indisputable proof of everything he always believed. He’d probably cease to exist, for what is the character of Fox Mulder if he’s not chasing unattainable windmills? It’s no wonder Mulder’s attitude has taken such a hit. He spent the better part of his life wanting to believe. What do you do when you realize your life might have been a waste of time?

Morgan has always been a writer who enjoyed deconstructing both The X-Files and Mulder’s and Scully’s place in the world. Granted, in the past Morgan was definitely more of the “Team: Scully” variety. After all, in “Clyde Bruckman’s Final Repose”, he implies that Scully is immortal and that Mulder will die of autoerotic asphyxiation. Here, he’s softened on Mulder a bit. He sees him as the poignant reminder that, eventually, we all grow up. We have to leave childish things behind, and for Mulder that might mean admitting the non-existence of jackalopes and rock monsters. Don’t get me wrong. Morgan still loves Scully. After all, she gets a dog at the end, she catches the serial killer, and she’s there to remember how much fun there was in monster hunting.

She now sees the joy in the X-Files pursuits that Mulder is now missing. Mulder used to care for the journey as much as the destination, whereas Scully wanted to understand her experiences. Now, the roles have shifted. Scully appreciates the journey. It’s Mulder who wants to know what it’s all about.

In a way, Mulder’s realizations mirror the realizations we all have as we enter adulthood. We all want to believe, but with adulthood comes the knowledge we have to leave some of our dreams behind. We have to get jobs, settle down, pay bills, be a grown-up. It’s nowhere near as fun as believing in ghosts and monsters, because as terrifying as those concepts may be, they imply there’s magic and mysticism in a world which we know has none. We all want to believe. It’s not just Mulder. As transformed monster Guy Mann (a perfectly cast Rhys Darby) tells Mulder, “If I haven’t written my novel by now, I’m never going to write it, you know?” Eventually, we all have to grow up and settle in for the unremarkable.

Morgan tackles the inherent absurdity of our daily lives by forcing an outsider to experience it. Guy Mann  is a monster forced to transform into a human when the cold light of the sun hits the sky. Once he’s human, he makes a series of distressing realizations: he needs to wear clothes (Kolchak: The Night Stalker’s clothes, apparently), he understands he’ll eventually die, he needs a job, he has to pay bills, and he’s miserable. He even tells Mulder about his angst in a cemetery, surrounded by reminders that we don’t go on forever. 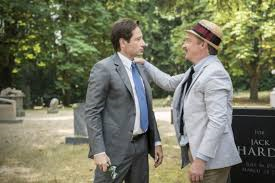 This is similar territory Morgan mined in his Millennium episode, “Somehow, Satan Got Behind Me,” which put forth the idea that the Devil really didn’t have to do much to condemn us to Hell. Our daily lives of alarm clocks, car horns, and petty grievances would eventually drive us to suicide, and then we were all his. Here, though, it serves to remind us how absurd our existences really are. Both Mulder and Guy continually reference how “silly” everything is. Although, Mulder’s referencing the monster’s story, and Guy seems to referencing the human condition. As Guy indicates, it’s “your philosophy” vs. “our philosophy.” Like the Morgan-penned X-Files episode, “Humbug,” he looks for the monster in the man and the man in the monster.

So, why does this episode feel so timely? It’s about us, in the way the best supernaturally tinged stories are. They allow us to examine ourselves. We laugh knowingly as Guy laments our many responsibilities, but we also wince because it’s ultimately difficult to really explain why we value the things we do, why we force ourselves to tolerate jobs we despise, why we force ourselves into financial obligations. We live like adults because we have to. In reality, we think it’s probably as awful as Guy does. For all the concerns about government conspiracies, aliens, and our contemporary anxieties, The X-Files reminds us it’s our daily lives that may in fact be the most ridiculous. What keeps it from plummeting headlong into despair is the promise that it may one day all make sense, that we may finally understand how the world works.

After all, Mulder finds, as he once did, “faith to keep looking” through a handshake with a monster (which Scully isn’t there to see. Sigh). To paraphrase last night’s episode, that’s how I like my X-Files.