LucasFilms has been making LEGO Star Wars cartoons for several years now, and they are consistently hilarious, perfectly balancing action and humor to entertain the kids and inside jokes to please the adults. These animated efforts craft original stories set during the time of the older movies or simply recreate the older movies with an eye toward satire, always glad to give lighthearted voice to many of our Star Wars criticisms. Along the way, Lego Star Wars has evolved from direct-to-video (Padawan Menance, Empire Strikes Out) to DisneyXD mini-series (Yoda Chronicles, Droid Tales). The next logical steps are to make a full-fledged Lego Star Wars TV series instead of glorified specials, and to start tackling the new Force Awakens era. That’s exactly what’s happening, just not quite in the way you might have expected. 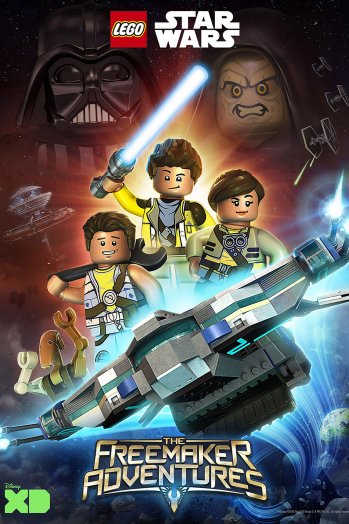 Late last week, Disney announced Lego Star Wars: The Freemaker Adventures, a brand new series set for a summer debut. As per THR, it will revolve “around the Freemakers, a family of scavengers who build and sell starships from the scoured debris of space battles strewn throughout the galaxy.  When their youngest discovers a natural connection with the Force through an ancient artifact — the Kyber Saber — his world is turned upside down, and he and his family are thrown into an epic struggle against the Empire to restore peace and freedom to the galaxy.”

Similar to Star Wars Rebels, they will encounter allies and villains, some of whom will be unique to the series while others will be familiar members of Star Wars canon. Freemaker will take place between Star Wars: Episode V — The Empire Strikes Back and Star Wars: Episode VI — Return of the Jedi. That’s great and everything, but they couldn’t have set it in-between Return of the Jedi and The Force Awakens?

Actually, they are doing something like that, but unlike Freemaker Adventures it won’t be a full-length series. Instead, DisneyXD is set to run several short-length episodes of Lego Star Wars: The Resistance Rises, covering the events before the First Order’s attack on Jakku. The first episode, “Poe to the Rescue,” features Kylo Ren, BB-8, Captain Phasma and Poe Dameron. It debuts tonight, and it’s only 6 minutes long. I’m assuming all of the future episodes, which will introduce more Force Awakens characters, will similarly be limited to 6 minute running times.

We’ll take what we can get, though, because 6 minutes is plenty of time for Lego to pack in the jokes. Here’s a clip from “Poe to the Rescue”: