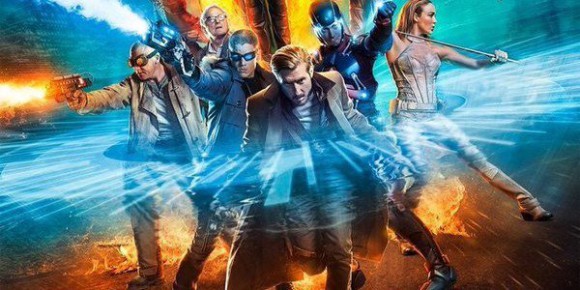 Legends of Tomorrow is the show built out of Arrow and Flash‘s spare parts. The CW loves its DC Comics TV shows, but Ray Palmer, Sara Lance, Firestorm, Hawkgirl and the Central City Rogues can’t all get their own individual spin-offs. So here they are thrown together, turning Legends showrunner Phil Klemmer into the little brother playing with a bunch of hand-me downs from different franchises, banging them together in the air and getting excited when he finds a “We are not so different, you and I” moment for two of characters.

The fifth episode of the show’s inaugural season aired last night. Entitled “Fail-Safe,” it was the conclusion to a surprising two-parter set in 1980s Russia. Next week sees the beginning of a potential run of episodes set in a nightmarish version of 2046 Star City ruled over by Deathstroke and policed by an African-American version of Green Arrow, though old man Oliver Queen will at least put in a token appearance.

I wasn’t crazy about the pilot, but I’ve liked each subsequent episode a little bit more. Even with its sci-fi time travel premise, you can tell this is ultimately of a piece with Arrow, Flash and Supergirl, following the same sincere, but campy impulses. By this point, we’re starting to get a better idea of how Legends show is going to work, and what kinds of relationships its trying to build up:

How do you tell that story in a 13-episode season when almost none of your characters actually know each other? For starters, you have to find a weekly story structure, as explained by BirthMoviesDeath:

Each episode begins with a big mission involving the entire team, setting up micro-conflicts between them that eventually cause things to go awry, followed by an episode’s worth of branching off into pairs and trios to work out their issues before teaming back up again

That story structure affords the writers the opportunity to cycle through different character pairings, and thus far it’s been something new every episode:

The writers have learned that Ray is a great comic sidekick with Leonard and Mick. His boy scout quality perfectly rubs up against their criminal inclinations. They’ve deepened the bond between Stein and Jax, an important step since those two were hastily thrown together on The Flash in the first place. Ray and Stein have built up a mutual respect for one another as have Sara and Leonard. As of late, Rip and Sara have grown closer.

If you think of it as a Star Trek crew, Rip is the Captain while Sara and Leonard are constantly vying for First Lieutenant. Stein and Ray are the science officers. Jax is the pilot. Mick is the head of security, and Kendra, um, is the Klingon? I don’t know. They’re still figuring her out now that Carter is gone.

The budget is reportedly high by CW standards, but  it’s still low enough that across five episodes we’ve only been in two primary time periods (1975 and 1986). It’s a time travel show, sure, but it has to be a cost-effective one. Are you crazy? They can’t afford new period-specific clothes every week.

It’s taken a moment to adjust to the notion of a season-long big bad who does die, just not for good what with the whole immortality thing. We’ve seen Vandal die two or three times now, but to him death is but a minor flesh wound.

They’re Constantly Cleaning Up Their Own Messes

In the rush to defeat Savage, Rip didn’t realize the gift he was giving his sworn enemy by introducing him to an Ant-Man/Iron Man suit, a man who can fly and shoot fire and two criminals with the coolest freeze ray and flamethrower you could ask for. As a result, our legends aren’t so much fighting Savage yet as they are constantly racing to take away that potential world ending weapon they accidentally gave him.

Cisco was on this week’s episode, not as himself but as a drug-induced vision. They could have done something more interesting with that. Next week’s episode with Oliver Queen stepping into the more classic comic book version of the Green Arrow with the beard is a better use of the show’s time travel premise and placement in the Arrow/Flash universe.

Just Think of It As the TARDIS Translation Matrix 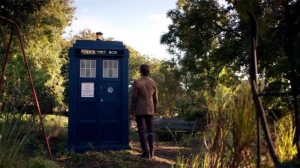 Doctor Who‘s aliens all happen to speak English and understand everything the Doctor and his companions say because the TARDIS is translating everything for them.

Last week, Legends introduced its version of that. Everyone simply swallow pills which attach to their vocal cords, and the ship’s computer auto-translates their speech into whatever language they want. How exactly that enables them to also hear local Russians as if they were actually speaking in English I don’t know, but just go with it.

Fine. They’re not actually considered legends in the future. And, sure, this isn’t the first time he’s traveled back in time to stop Savage. But, seriously, that’s it. That’s the end of his lies. Complete honesty from this point forward, right?

FilmSchoolRejects argued, “I can’t figure out yet if this show is good, or simply entertaining. But the answer to that question doesn’t matter much because the first few episodes have just been so much fun.” I’m of a similar mindset, although I hesitate to differentiate between “good” and “entertaining.” This show, like Arrow, Flash and Supergirl, is basically sincere camp. It’s not for everyone, and it has its flaws. However, it’s improving from week to week, seemingly with each new compelling character pairing they try out. You can still play a drinking game along with its various tropes, a cold pun here, a melodramatic Rip Hunter turn there, but it’s not necessary to enjoy what is turning into Arrow and Flash‘s crazy little brother.