I used to work as a research assistant at a college, gathering data, preparing reports and writing academic articles. Dr. Stacy Smith et al.’s new report out of the USC Annenberg School for Communication and Journalism reminds me of those old days.

Entitled “Inclusion or Invisibility?: Comprehensive Annenberg Report on Diversity in Entertainment (CARD),” Smith and her co-authors lay out the results of a groundbreaking industry-wide analysis. Prior to this report, assessments of diversity in Hollywood have either focused on the behind the scenes composition of the film and TV industry or looking at the gender and racial make-up of all films and TV shows. CARD combined all of that into the same study, thus producing rather damning quantitative evidence confirming what we pretty much already knew: the whole freakin’ industry is white, white, white (and male).

Here’s what the CARD team did:

They watched 109 films released theatrically in 2014 and 305 TV shows which aired between September 1st, 2014 and August 31st, 2015 on any channel associated with 21st Century Fox, CBS, Comcast NBC Universal, Sony, Disney, Time Warner, Viacom, Amazon, Hulu and Netflix. Through those programs, they assessed over 11,000 speaking characters for gender, racial and ethnic representation and LGBT status. Behind the scenes, over 10,000 directors, writers and show creators and 1,500 executives were evaluated based on gender.

At the end, they assigned each company a percentage grade based on five specific criteria, three of them related to on-screen portrayals (% of female/racially underrepresented/LGBT characters) and two to behind the scenes hirings (% of female directors/writers).

Here’s what the CARD team discovered: 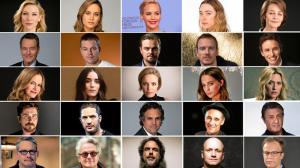 Stretched across 27 pages, CARD is the kind of report I would have contributed to back in my research days. An “Executive Summary”? Ah, I remember editing plenty of those, knowing full well that it was the only part of the report some people would ever read. “Introduction,” “Methodology” and “Results” sections? Those used to be my jam (assuming “my jam” is still a thing people say these days).
It’s relatively easy to identify the problem, explain how you went about gathering data and then listing everything you discovered. It’s far more challenging to contextualize your findings in the larger body of research and pose some actual suggestions for ways to improve things.

In this case, the problem is that our entertainment is still primarily made by white males because that robs us of potentially progressive movies/programming with more three-dimensional characters. Recent bright spots like Empire, Blackish, Fresh Off the Boat, Jane the Virgin, Crazy Ex-Girlfriend and the Shonda Rhimes empire are changing the tide but not as much we’d like to think. CARD’s findings indicate that representation, both on-screen and behind the scenes, is about as bad as prior studies indicated, with one of the few bright spots being the way women have nearly achieved gender parity at the Senior Vice President-level at all film/TV companies. The solution?

Well, as John Oliver just joked one obvious solution to the lack of roles for people of color in film is to stop casting white actors to play non-white characters:

The CARD team made multiple general arguments for steps for improvement, chief among them to consider 50% women and 38% people of color for all writing and directing jobs, a direct reflection of their actual percentage in the U.S. population.

However, I am more drawn to Slate’s extra-long report from last October, which was exclusive to the plight of the nonwhite TV writer in Hollywood but seems applicable here. Aisha Harris conducted more than 20 interviews over several months with “writers (nonwhite and white, young and seasoned), executive producers, and directors of diversity programs and committees.” She heard story after story of ambitious young minority writers progressing through diversity programs and struggling to land writing staff gigs since most shows only staff one nonwhite writer as a token hire. Those lucky enough to land such a gig were often made to be the voice for their entire gender/race in the writer’s room and battled hostility from the white writers who questioned whether they were actually good enough to be there or simply got in because someone somewhere felt they had to have the one girl/black person/Latino/Asian-American/etc.

At the end, Harris presented some convincing arguments for potential solutions, and that’s how I’ll end this piece:

It’s time to stop placing the burden on diversity programs, relying on the few execs who are willing to take chances on people of color, or seeing the success of Scandal and Empire as evidence that there’s no problem to solve. Instead, every showrunner should be forced out of his comfort zone. What if the Writers’ Guild incentivized—or, why not, mandated—multiple nonwhite hires in every union-staffed writers’ room? One of the most common reasons showrunners give for not having diverse writers’ rooms is that they just don’t see enough writers of color from whom to choose. Why not force showrunners to go beyond relying on what they are sent by agents—to actively seek out new voices? Why not give agents an incentive to dig deeper and find more writers of color?

And what about the studios who make deals with the same showrunners year after year? Stacy L. Smith, director of USC’s Media, Diversity, and Social Change Initiative, has argued for a Hollywood version of the NFL’s Rooney Rule, which mandates that a nonwhite candidate must be interviewed for every head-coaching position. If studio executives were required to interview a certain number of diverse candidates for senior-level showrunner and executive producer deals, it could change the playing field for writers of color.

Studios should also hold themselves accountable for encouraging underrepresented voices in more senior positions. “Maybe there’s a fund that says, there’s a certain amount of money dedicated every year to a diverse writer and a diverse project, and they’re gonna shoot their pilot, ” suggested Ben Cory Jones, who is developing a half-hour black comedy for HO. (The British Film Institute instituted a similar incentive last year, requiring all eligible projects to meet certain standards of diversity in order to receive Lottery funding.) Even if networks are unwilling to commit to shooting a pilot, why not take some of the money devoted to placing nonwhite beginning writers on shows and spend it on development deals with producers and showrunners of color? Making a commitment to one or two such people in senior positions will go a lot further in diversifying a network’s voices than throwing individual writers of color into writers’ rooms that don’t know what to do with them.

This isn’t just the right thing to do—it’s the right move from both a business and creative standpoint. Increasingly, predominantly white audiences aren’t needed for a show to do gangbusters ratings, as Empire, with its overwhelmingly black audience, clearly demonstrates. Latinos continue to be the fastest growing TV-viewing demographic among viewers aged 18–49, and Asian-American audiences have grown as well. “People have started to realize, ‘Oh yeah, we don’t have to worry about making white people like them,’ ” said Vali Chandrasekaran, a co-executive producer of Modern Family who went through NBC’s diversity staffing initiative in its early years. “Because if they have a big enough fan base, that’s all you need.”