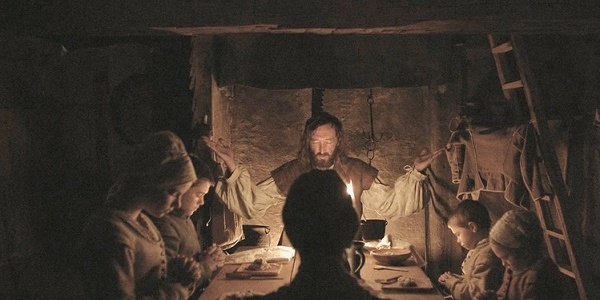 The Witch is a classic example of a “What if…” movie except instead of pulling a Pixar and pondering what it would be like if toys came to life or if the dinosaurs never went extinct it looks back at 1600s New England and asks, “What if the Puritans were right? What if witches really did exist?”

It’s a compelling hook to hang a film on, although it’s hardly the first to try. Everything from supernatural comedies (I Married a Witch, Hocus Pocus) to gonzo horror (The Lords of Salem) to animated kids movie (ParaNorman) have imagined what it would be like if the horrors of Salem somehow revisited the present. The Witch is somewhat unique in that it actually takes place in the time of the Puritans, thus inviting comparisons to WGN’s on-going dark horror TV series Salem, which re-imagines the Salem Witch Trials from the witches’ point of view. In the show’s central twist, the real witches are shown to be the secret orchestrators of the Trials, manipulating the Puritans into executing innocent people as part of an ancient blood ritual meant to unleash hell on Earth.

The Witch takes a completely different approach. Set in 1630s New Hampshire, around 60 years before the Trials, it follows a Puritanical family cast out of its plantation over an unspecified theological disagreement and forced to make a new life for itself on the edge of the spooky wilderness. Things don’t go well.

As we discover in the second scene of the film, literal evil lurks in the woods, its every appearance trumpeted by a remarkably haunting, overbearing musical score which drowns out the audio ala Stanley Kubrick’s The Shining. If you play a game of peek-a-boo with a baby near the edge of the woods, that baby will be snatched from you with supernatural speed. If you venture into the woods, well, spoiler alert, poisoned apples and mysterious hares come into play.

This is essentially the Puritans’ fairy tale version of a witch brought to life in all of its disturbing glory, reminding us that our deeply religious forefathers genuinely believed witches stole babies and used their blood to lube up their broomsticks. As Witch‘s first time writer-director Robert Eggers told BirthMoviesDeath, “When I started doing the research and started reading the first-hand accounts, I realized that the real world and the fairy tale world were the exact same thing in that period. When someone was calling you a witch they really believed you were an archetypal, fairy tale ogress capable of doing all the things that happen in my film.”

The point of the story, then, is to show us exactly how the Puritans looked, lived and behaved, down to the smallest detail, so that we can understand how truly horrifying it would be if their superstitions about witches were accurate.

Initially, this feels a bit like a cinematic version of a visit to one of those living museums where actors dress, act and talk like people of a specific era, going about their business in a recreated cowtown, Renaissance faire or tiny Puritan village. In this case, “So that’s how they harvested corn back then. That’s how little kids played. That’s how they handled their chores and washed their clothes. That’s how they talked.” Indeed, the old English dialogue, with all of its “thou”s and “thy”s, recalls high school readings of The Scarlet Letter and Crucible.

Once you adjust to everything, you are sucked into their lives, identifying most closely with the oldest daughter, Thomasin (Anya Taylor-Joy), who we first meet praying to the heavens and begging forgiveness from God for her lack of faith. Thomasin’s father William (Ralph Ineson), mother Katherine (Kate Dickie), younger brother Caleb (Harvey Scrimshaw) and creepy twin siblings Mercy (Ellie Grainger) and Jonas (Lucas Dawson) all receive plenty of attention, but she is ultimately the main character.  As io9 argued, she “most embodies the film’s interwoven themes of religion, guilt, fear, and desire. Through her, we experience the drudgery of farm life, and her escalating realization that her lot in life is rather bleak.”

As things continue to go south for the poor family, the horror stems not from the actions of the titular witch, which are only ever glimpsed in shadow, but in the horrified reactions from the family, who respond to each new slight with pious stubbornness and prayer before giving in to extreme acrimony and paranoia. Along the way, the father’s hypocrisy is revealed, the mother begins to lose her faith and Thomasin clings to her sanity like a life preserver.

This all progresses on a slow burn, playing out like a series of increasingly intense chapters, each one ending on a startling moment before abruptly cutting to black and starting the next chapter. As Eggers told BMD, “I just tried to end every scene with a sense of ‘Oh no!’ And that meant each ‘Oh no!’ had to top the last one.” It’s effectively jarring, if a bit frustrating since every time it feels like something has finally happened we cut to black. 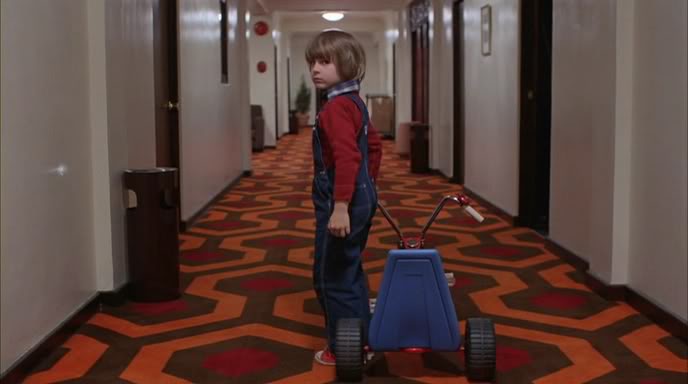 Perhaps that’s where my own personal sensibilities diverge from Robert Eggers’. In a recent three-part interview with SlashFilm, he discussed in great detail how much The Witch was influenced by Stanley Kubrick’s The Shining, Igmar Bergman’s Cries and Whispers and Benjamin Christensen‘s 1922 silent quasi-documentary Häxan: Witchcraft Through the Ages. From Kubrick came the “visual style and the sense of a place possibly haunted long ago,” and from Bergman came the “spectacle of incipient madness overtaking women.” However, I emerged from The Witch much in the same way I have pretty much every Kubrick and Bergman film I’ve ever seen, admiring the technical accomplishments without ever truly engaging with the material. Some directors make amazing movies which simply aren’t for you.

In the case of Eggers, I know The Witch is a masterfully made movie. The cinematography is stunning, using mostly natural light the same way Emmanuel Lubezki did for The Revenant. The shot composition is often inspired, leaving just the right amount to the imagination and occasionally striking an avant-garde pose by having characters stare directly into the camera, usually as they are looking to the heavens in search of religious salvation. The performances are all compelling, with particular praise for casting actors who could make the old English dialogue sound so natural. Of course, the whole thing has been mis-marketed, and it will suffer from its own hype just like It Follows and The Babadook. However, this is an undeniably good movie. 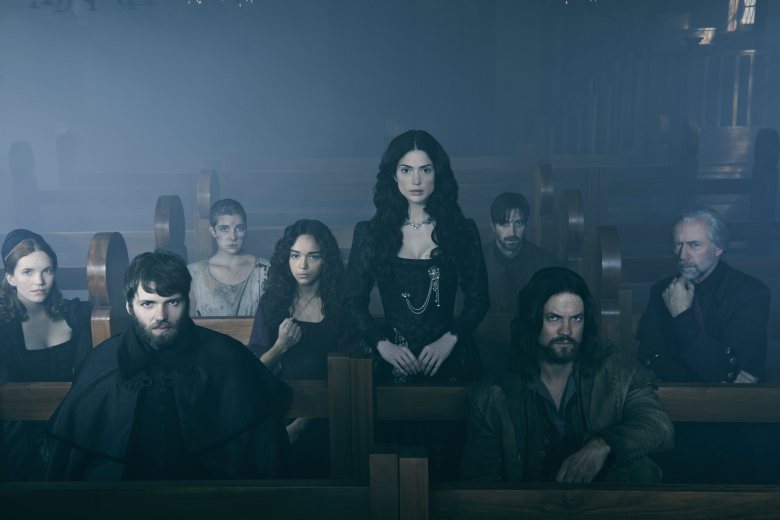 So I can’t disagree with the critics who have fallen in love with it; I just don’t share that love because when it comes to cinematic stories about Puritans my personal tastes skew more toward Salem. That is an apples to oranges comparison, I know, since we’re talking about a movie vs. a TV show. Still, after being initially written off as trashy due to its boundary-bushing visuals, Salem has quietly turned into one of the more fascinating ongoing efforts in genre television, with a compelling central anti-heroine (Janet Montgomery’s Mary Sibley) and a supernatural story consistently used as an an allegory of female oppression.  Through its own “What if…” historical narrative, Salem positions witchcraft as the best possible alternative for a group of women living in a male-dominated society which severely limited their options. The Witch, spoiler alert, gets there eventually.

To be clear, Salem is a completely different beast than Witch. Adam Simon and Robert Eggers both spent years researching 1600s New England prior to creating Salem and Witch respectively, but they came to it with different influences. Salem is modeled after Wuthering Heights, The Exorcist, Rosemary’s Baby as well as a TV show like Deadwood. Eggers, meanwhile, stole from the giants of cinema like Kubrick and Bergman and turned to forgotten classics from the silent film era.

Furthermore, as the AVClub argued, “Salem isn’t an accurate depiction of the historical Salem witch trials, nor is it trying to be. What it is, however, is a fantastical story about persecution and corruption. It is a story of the evils that men and women do and why.” The Witch, on the other hand, has made historical accuracy its calling card, literally putting up a card immediately after the final image of the movie to explain that everything we just saw was completely accurate to the New England folk tales of the era. It’s not based on a true story, but instead on the actual supernatural beliefs of the era. It uses those beliefs to tell a story about a people who were “stifled, confined, lonely, and utterly without hope.” 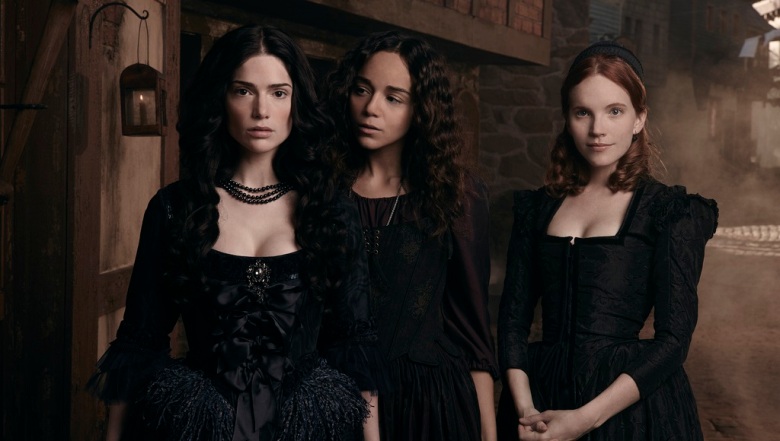 Both Salem and Witch remind us that life was hard back then, especially for women. Puritans were hypocritical bastards, and actual witchcraft would have completely rocked their obnoxiously pious minds.

The former does so in delightfully over-the-top, gonzo horror fashion while the latter is the model of restraint, its rather deliberate pace purposefully doling out the terror in perfectly measured short bursts. Neither is necessary better than the other, and it’s certainly possible to enjoy both styles. I suppose I simply prefer the more direct message and crazy horror of Salem over Eggers’ dreamlike imagery and Kubrikian horror.

88% – “As thought-provoking as it is visually compelling, The Witch delivers a deeply unsettling exercise in slow-building horror that suggests great things for debuting writer-director Robert Eggers.”