Actually, I made up that last one myself. In truth, Fuller House, Netflix’s 13-episode revival of the family sitcom which aired nearly 200 episodes from 1987 to 1995, is very, very not good, but since when does that matter with Full House?

The set-up is a gender inverted twist on the original. This time, the recently widowed parent of three kids (all boys, to further the gender inversion) is D.J. (Candace Cameron Bure). The relative and friend who move in to help her are little sister Stephanie (Jodie Sweetin) and BFF Kimmy Gibbler (Andrea Barber). Unlike Uncle Joey and Jessie in the original, Kimmy brings a tween daughter with her when she moves in, thus putting three grown women, three young boys and a tween girl under the same roof in the iconic San Francisco home from the original series. The end result is a thoroughly traditional version of a TGIF sitcom, seemingly willed into existence by the twin cultural forces of 90s nostalgia and detached, ironic viewing of bad TV. 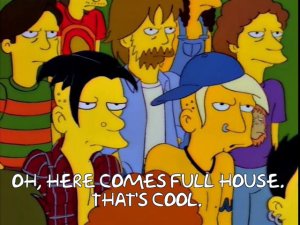 Behind the scenes, John Stamos has been trying to make a Full House revival happen since at least 2008, and the ratings success of the Disney Channel’s Boy Meets World sequel Girl Meets World in 2014 gave him and original Full House creator Jeff Franklin the necessary ammunition to convince Netflix to pull the trigger.

Initially conceived by Franklin “as a show about three stand-up comedians living in the same house,” the Full House we eventually saw debuted in 1987 and was used as the flagship show when TGIF was officially launched in 1989. Full House exploded in popularity after that, so much so that ABC eventually moved it to Tuesday nights for its final four seasons. Even after it stopped airing new episodes, it never really went away, always airing in syndication somewhere.

I was actually younger than D.J. and Stephanie when Full House started, and roughly the same age as Corey Matthews when Boy Meet World pretended it would be super school to live next door to your middle school teacher. The modern successors to TGIF, your Good Luck Charlie’s and Dog with a Blog’s on The Disney Channel, are not made for me.

Fuller House and Girl Meets World are theoretically different. The adult viewers are supposed to want to know what’s become of D.J., Stephanie, Kimmy, Corey Matthews and his now-wife Topanga. When there are little references to original series episodes we’re supposed to nod with knowing approval, and when Danny Tanner, Uncle Jesse and Joey, Shawn Hunter, Mr. Feeny or whoever else pop up as guest stars we’re supposed to hoot and holler just like the laugh track tells us to.

However, that doesn’t always translate. In reviewing the Girl Meets World pilot, EW astutely observed, “This is clearly a series meant for viewers born after the original show ended in the year 2000, and if you’re not one of them, watching it will make you feel old. The show’s bright colors, broad jokes, and earnest lessons all scream ‘modern-day Disney,’ and it’s unclear how much the series cares about hooking mothers and fathers as well as their progeny.”

The pilot was so focused on passing the torch that in the first minute Corey tells his daughter Riley, “Here’s what I’m thinking. It’s not your world yet. It’s still my world. Because if it was your world, Maya would have you on the subway already.” If that wasn’t enough, “world” is uttered 12 more times across the pilot, usually in reference to Corey being done meeting the world and stepping aside to let his little girl have her turn. Yet the show’s first season still bent over backwards to incorporate guest appearances from Boy Meets World co-stars and frequently threw a bone to those twenty- and thirty-somethings watching with their kids.

Girl Meets World is now nearly finished with its second season, and its Boy Meets World guest appearances are virtually non-existent. Corey and Topango are still around, but it’s quite clearly a show about Riley Matthews and her Shawn Hunter-esque best friend Maya Hart, palling around with their various friends to contend with school bullies, cute boys, white guilt, religious freedom, financial responsibility and whatever else the writers throw at them. By this point, the baton has officially been passed, and if you are an adult viewer you know that what you’re watching isn’t meant for you.

Fuller House is caught somewhere in-between. Its pilot isn’t so much a pilot as it is a cloying reunion special with guest appearances from just about anyone you could expect to see other than Mary Kate and Ashley Olsen, the only two who actually said no to this side show. Once Saget, Stamos and Coulier instantly recede into the background in all of the subsequent episodes the baton is clearly passed to Bure, Sweetin and Barber, and the story lines settle into standard TGIF sitcom problem-solving and group hugs. However, the new kid actors struggle to distinguish themselves, especially since they all  “give off that counterfeit Disney Channel sass of showbiz,” as The Washington Post put it. Fuller House clearly want the middle child in the family, Elias Harger’s 7-year-old Max, to emerge as their little scene-stealer ala Stephanie in early Full House, but based on the first 8 episodes he seems to yell all of his lines and has little to do other than obsess over his new dog.

I have to stop writing this review right now to admit something: While looking up Elias Harger’s name on Wikipedia, I saw that his character’s full name is Max Fuller. Wait. D.J.’s dead husband’s surname was Fuller meaning she now has that last name and so do her kids? So, Fuller House is literally about the Fuller household. Ugh.

While I’m at it, I might as well make another confession: After 8 episodes, I don’t actually hate Fuller House. Well, not anymore.

While watching the pilot, I wanted to tell anyone I could that John Stamos is actually really, really good in Grandfathered, a sitcom far more worthy of our attention than Fuller House. I imagined Bob Saget suffering a psychotic break during the first episode and going through his own version of Birdman with a version of Danny Tanner mocking him like a devil on his shoulder, except Danny is such a neat freak he’d compulsively clean up the dressing room after Saget trashed it. I pictured Andrea Barber struggling to slip back into memorizing lines and hitting her spots since she hasn’t acted professionally in years. I wanted to know how much plastic surgery was on display in front of us.

More than anything else, I just felt so, so old, especially when the new opening credits (and Carly Jae Jepson’s cover of the famous theme song) re-used the Full House credits to reminds us what Bure, Sweetin and Barber used to look like. For example: 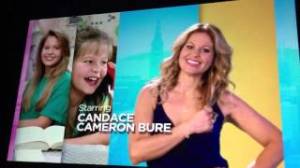 However, these women are seriously committing to the job. As The Daily Beast pointed out, “Candace Cameron Bure is a completely winning sitcom lead. She lights up the screen, and has the kind of crack comedic timing that makes the straight-man still fun to watch—taking after her TV dad, Bob Saget. Despite not acting for two decades, Andrea Barber and Jodie Sweetin are so keyed into their old characters it’s almost disturbing. The show is gloriously ridiculous still.”

And it just eventually beat me down into submission. Eventually, I was agreeing with the opening line of the theme song, thinking, “Yeah, what did ever happen to predictability? Why can’t a sitcom just be ‘corny, schmaltzy, hammy, predictable, pandering, and retrograde’?” These episodes are the emptiest of empty calories, and watching them will neither restore nor tarnish my childhood. Instead, it’s a reminder of what family sitcoms used to look like.

This is a world in which problems are solved by leaning on your best friend to re-enact the final scene from Dirty Dancing, and when a mother enters a wrestling ring to protect her son she suddenly becomes capable of basic (hip check) and complicated (hurricanrana) wrestling moves she’ll later claim to have no memory of, clearly so blinded by her grizzly mama instincts. You’ll laugh at the sight of a dog sitting in a potty training chair to learn how to stop popping in the house, but then you’ll laugh at yourself for laughing at such a lazy joke. At the end of the day, they’re all nice people trying to be nice to each other, and it’s just so disgustingly simple.

But that’s what you get from Full House 2.0. The only real new addition is the occasional meta joke, with references to the show’s own violin music, the high price of Mary Kate and Ashley Olsen’s fashion line and the desperation of reunion specials. Otherwise, the world said it wanted more Full House, and now that it’s here, updated but fundamentally the same, who are we to really reject it? This show is so not good, but Full House never was. We loved it anyway. I don’t love Fuller House, but I recognize that even with its showbiz-kids, odd meta jokes and groan-worthy one-liners it’s doing exactly what it wants to.

1. Kimmy’s mixed race daughter Ramona prior to moving in with the Fullers: “Do you really want me to change schools and be the outcast loner kid? All to move in with the whitest family in America? The Fullers are like albino polar bears drinking milk in a snowstorm watching Frozen.”