Bad Moms, the new R-rated comedy co-written and directed by The Hangover‘s Jon Lucas and Scott Moore, is the latest in the year of women behaving badly, following Sisters, The Boss, Neighbors 2 and Mike and Dave Need Wedding Dates. For some, this shtick of the “fairer sex” being just as rude and raunchy in movies as men feels played out, what with us now being 5 years removed from Bridesmaids. For others, these comedies infuriate by merely skimming the surface level and failing to offer any meaningful commentary on gender-based double standards. And for the more militant among us, these films are simply patriarchal imitations of true, authentic feminist comedy and should be rejected en masse until they are all directed, written and produced by women.

But, dammit, sometimes you just want to watch Mila Kunis, Kathryn Hahn and Kristen Bell rampage through a grocery store in slow motion, mixing White Russians in the middle of an aisle and scaring a security guard into retreating wildly to the point that he runs straight into a stack of boxes. Sometimes a bawdy night out at the movies is all you need. Bad Moms certainly delivers on that front, yet at the same time it also speaks to the stresses of modern motherhood in surprisingly direct and easily digestible ways.

If you couldn’t tell from the trailer, the basic plot is as follows: Mila Kunis is an overachieving mother of two, but after a truly terrible, horrible, no good, very bad day she snaps and quits the PTA, meeting up at a bar afterward with fellow moms (the zany Hahn and repressed Bell) who quickly become her best friends. Their increasingly rebellious ways places them squarely in the crosshairs of the queen bee (Christina Applegate) who runs the local PTA (and, by extension, the school). Thus, the loose and free moms are pitted against the prim and proper Martha Stewart acolytes (Jada Pinkett Smith and Bridesmaids co-writer Annie Mumalo round out Applegate’s crew), and you can count on one hand the number of men who ever pop up, at least in any meaningful way.

The idea is not so much that these three women suddenly decide to become bad moms. Hahn’s character was already there.  For example, at one point she gleefully claims to have given her big, dumb son $10 and dropped him off at a fast food restaurant instead of hiring a babysitter to look after him. It’s more that they take a stand against society’s idealized version of motherhood which they were killing themselves trying to achieve (again, not so much Hahn). Appropriately enough, one of the first actions they take during their drunken raid of the grocery store is to tear apart a life-sized cut-out of a media-perfect mom hawking some cleaning product. Suddenly empowered, the next morning Kunis stops making her kids breakfast (they can pour their own damn cereal) or doing her lazy son’s homework for him, and the kids have no idea how to cope with a world in which they are not endlessly catered to.

It’s really a classic Hollywood wish-fulfillment comedy. This is a film for all of those moms whose secret fantasy is to simply have a pleasant breakfast alone at a cafe, ride the kids to school in the husband’s muscle car he won’t let anyone touch, call the shots at work over the complaints of an idiot boss and then enjoy a night of passion with the hot single dad all the other PTA moms openly lust after. Mila Kunis gets to do all of that, and you root for her to do so, even as you do the math in your head to figure out if she’s actually old enough to be playing the mother of a 12-year-old girl (turns out, Kunis is actually 32, and her character is said to have had her first kid at 20).

You’re not supposed to notice or question the more practical parts of the story which the film often glosses over, such as questions over money, the specifics of Kunis’ marital separation or where exactly their kids are half of the time (when in doubt, just assume a babysitter was called). You’re also not supposed to wonder how Kunis’ estranged, cheating husband (David Walton) manages to even dress himself in the mornings considering how cartoonishly dumb he comes off, both via the script and in Walton’s performance.

Instead, you’re supposed to laugh…a lot. If you’re a mom, it’s meant to be both funny and cathartic, inspiring you to chuckle while also declaring, “Yes, finally someone said it.” If you’re not a mom, well you’ll still laugh because Hahn, Bell and Kunis are a fine-tuned comedy trio, and Applegate is a more than worthy foil, holding her own with the girls here just as well as she did with the Anchorman guys. 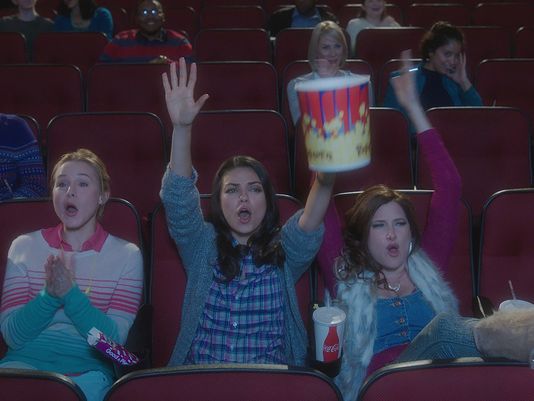 Plus, wow, Hahn is a force of nature in this movie, turning what would otherwise seem like a standard role if played by a man (i.e., a sexually adventurous, alcohol-loving type who doesn’t give a shit about the rules) into an absolute revelation. She makes every line of dialogue and facial expression entirely her own. Remember how funny people thought Vince Vaughn was in Wedding Crashers back in 2005? That’s how funny Kathryn Hahn is in Bad Moms here in 2016.

Hahn’s scene-stealing and the plot’s inherent focus on Kunis leaves Bell comparatively underserved, but her turn from timid housewife to self-assured boss produces considerable sympathy and a healthy supply of quality punchlines, such as her description of what Tom Selleck’s Blue Bloods means for her weekly date night with the husband.

However, you can sometimes sense the studio notes from the constant reminders that though these women are making strides for their own mental health it doesn’t make them selfish monsters who hate their kids.  Often times, it feels like we’re being told, “But, seriously, these women really, really love their kids. You get that, right? You aren’t judging them right now, are you? There are no bad guys here. If anything, society is the real enemy in this scenario.”  That being said, there’s something honest and hilarious about seeing these women openly discuss all the things they don’t like about their kids before emotionally declaring they love those kids so much it scares them.

In the end, the film’s message is for mothers everywhere to go just a little easier on themselves, recognize that no mother is perfect and that’s okay. This message is beaten home by a closing credits montage of the actresses from the film sitting next to their real life moms, who recount several embarrassing parenting mishaps with the refreshing candor of women clearly secure in the fact that everything ultimately turned out okay. Indeed, all of the major actresses in this film are mothers themselves, and the producer, Suzanne Todd, is a single working mother of 2. They’ve all made a film their kids should be proud of…well, maybe not today. Seriously, this is a very hard-R. Those kids can watch it when they get older.

My pick for the funniest mainstream comedy of the year.

67% – “Bad Moms boasts a terrific cast and a welcome twist on domestic comedy — and they’re often enough to compensate for the movie’s unfortunate inability to take full advantage of its assets.”

HOW DID THIS COME FROM THE MINDS OF TWO DUDES?

It didn’t. Not entirely at least. Jon Lucas and Scott Moore wrote and directed this together after separately observing how hard their wives were working at being the best moms ever, but to make the script more authentic they pulled a page from Michael Bennett and A Chorus Line by inviting groups of moms to share their stories (as Bennett did with background dancers when workshopping his musical about the lives of Broadway’ss unsung heroes). Moreover, they were also constantly open to suggestions from their cast since, as mentioned above, all of the moms in this movie are played by working mothers.

Before going out to bar to hit on guys for the first time since her teenage years, Mila Kunis is rather harshly told that what she thinks of as being her sexiest bra is perhaps the most unsexy thing her friends have ever seen.

Kristen Bell must have felt a sense of deja vu while acting out this scene. She was on the opposite end of this scenario in The Boss, where her character’s pre-date bra choice is viciously mocked by Melissa McCarthy.

I am not someone who thinks the shtick of the “fairer sex” being just as rude and raunchy in movies as men is played out, but perhaps this specific bra joke is a bit played out, having popped up in similar movies in the same year and featuring the same actress.