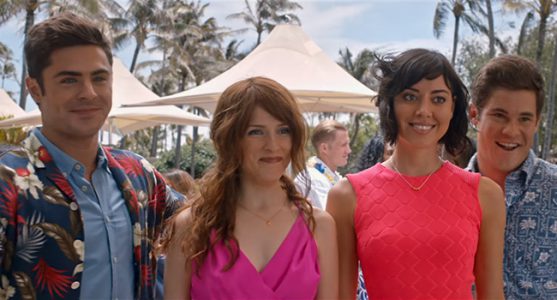 Men have been behaving badly in comedies for decades now. It’s time for women to have their turn.

That’s been one of the themes of 2016, starting with Tina Fey and Amy Poehler in Sisters, technically a late 2015 release which made a third of its money in January. Then we had a liquor bottle-toting Rebel Wilson teaching Dakota Johnson How to Be Single, and Aubrey Plaza spewing out the most insane old man-themed dirty talk in Dirty Grandpa (e.g., “I want you to tear open my bra like it’s a social security check”). Melissa McCarthy led a Girls Scout army in The Boss. Sally Field spitefully sabotaged a perfectly happy young couple’s relationship in Hello, My Name is Doris. Rose Byrne, Chloe Moretz, Kiersey Clemons and Beanie Feldstein stole Neighbors 2 from the guys, and now Anna Kendrick and Aubrey Plaza (who is clearly having a big year) have done the same with Mike and Dave Need Wedding Dates. By the end of the month, we’ll have female Ghostbusters, and Kristen Bell, Mila Kunis and Kathryn Hahn leading a revolt against PTA bitches (Bad Moms; read my review).

Weird, right? It’s almost like Hollywood suddenly realized over half of all moviegoers are female.

That doesn’t mean all of these films are super hilarious. For example, many have already forgotten about the existence of How to Be Single and The Boss. Debates still rage about whether Neighbors 2, which repeated the plot of the original just with a sorority instead of a fraternity, is “bullshit feminism” or genuinely “feminist as fuck.” And if you swear by RottenTomatoes the consensus right now is that Mike and Dave Need Wedding Dates is a mere skeleton of a movie propped up by enthusiastic actors.

Well, screw that noise. Mike and Dave Need Wedding Dates is one of the most consistently funny films of the year just as long as you’re not easily offended and don’t mind purposefully dumb comedy. Mick LaSalle of the San Francisco Gate titled his review “Not one scene in Mike and Dave is funny: All of them are,” and that sounds about right to me (if perhaps grammatically confusing).

The plot is pretty much in the title: At the behest of their enraged family, two ne’er-do-well brothers (Adam Devine is Mike, Zac Efron is Dave) put out an ad to recruit respectable dates for their little sister’s wedding in Hawaii, and two fuck-ups con the guys into picking them by pretending to be a schoolteacher (Plaza is Tatiana) and hedge fund manager (Kendrick is Alice) in exchange for the free trip to Hawaii. Tatiana leads Mike on despite having nothing but contempt for him whereas Alice and Dave have an actual sweet chemistry together.

Once they’re in Hawaii, things go well initially, but the girls ultimately play a pretty significant part in accidentally ruining the wedding. The film Wedding Crashers is referenced (and has one of its best gags hilariously debunked), which seems appropriate because Mike and Dave is essentially Wedding Crashers: The Next Generation except this time the girls get equal billing.

Amazingly, this is based on a true story. Thanks to a contact they had inside the influential talent agency CAA, the real life Mike and Dave Strangle landed a book AND film deal when their Craigslist ad for wedding dates went viral in 2013. However, it was for their cousin’s wedding, not their sister’s, and they didn’t even end up taking anyone they met through the ad. Instead, the lucky recipients of the Hawaii trip were two hometown friends.

Where’s the fun in that? The screenwriters (Andrew Jay Cohen and Brendan O’Brien) gave the fictional versions of the brothers two trainwrecks to take to Hawaii. Shortly after being hired first-time director Jake Szymanski actually revised the script to introduce the girls earlier in the story, turning the film into more of a “a true four-hander.”

Indeed, we meet Alice and Tatiana as bar waitresses, the former a table-dancing mess who routinely re-watches the video of her fiance leaving her at the altar and the latter her foul-mouthed bestie. Meanwhile, Mike and Dave are idiotic liquor salesman who coast through life on little more than charm and good looks. Each pair are shockingly co-dependent, and secretly too scared that they’re not good enough so they never even try to do anything with their lives.

This will eventually provide the story its emotional heft. Dave will talk about secretly wanting to be an artist but how he fears what that would do to Mike. Tatiana will go to extreme, sexually shocking lengths to secure her friendship with Alice. For their parts in the equation, both Mike and Alice will go a little crazy, Mike crumbling under the weight of so much going so wrong so fast and Alice turning to drugs to cope with being at her first wedding since her Runaway Groom incident. In the end, their respective friendships will take dramatic precedent over any romance.

But that’s so not the true point of Mike and Dave. The point is to be a joke-delivery machine, with a script filled to the brim with one-liners and fashioned to ensure that just about every scene ends on a joke. Often times, we aren’t even watching Mike, Dave, Alice and Tatiana. Instead, we’re watching Adam, Zac, Anna and Aubrey ad-libbing in that Judd Apatow-Adam McKay-Paul Feig way which is now so common in American comedies. The director points the camera at the actors, and lets them fire off as many jokes as they can think of. The editors pick the best ones in post-production, and the second and third best ones are cut into a blooper reel which plays over the credits. In fact, some of Plaza’s one-liners in Mike and Dave‘s blooper reel are just as good if not better than the ones in the actual movie.

In some movies, this can be grating, and on occasion Mike and Dave is quite clearly guilty of overindulging its actors, particularly Devine, who lives to undercut drama with broad comedy. However, Plaza and Devine are generally so good at going big with the jokes and Kendrick and Efron are fantastic at reacting and usually keeping things a bit more grounded. Moreover, the supporting cast, particularly Sugar Lyn Beard as the bride to be and Alice Wetterlund as Mike and Dave’s ultra-competitive, aggressively bisexual cousin Terry, routinely steal scenes. Plus, not all of the laughs come from dialogue. There are also plenty of physical gags, one of which is in the trailer (e.g., “Your face looks like burn victim Barbie”). Another comes out of nowhere, but is so funny it shouldn’t be spoiled.

One of the best moments in Wedding Crashers is when Isla Fisher reveals she’s been conning Vince Vaughn nearly as much as he thought he’d been conning her. Mike and Dave Need Wedding Dates is that same kind of comedy, but this time it includes the female, as opposed to just the male, point of view. Men shouldn’t have the exclusive on behaving badly, and while Mike and Dave puts its title characters through the familiar motions it also allows Anna Kendrick and Aubrey Plaza to have the best jokes. The film is guilty of occasionally overindulging its actors, both male and female, and maybe a couple of their dramatic scenes didn’t need to be so thoroughly undercut by jokes. But who cares when the results are this funny.

-Pull out your Zac Efron bingo card. He’s needlessly shirtless in one scene. He sings even though we had no idea his character could sing prior to that. He even dances a little. And all the female characters rave about how hot he is. That makes Mike and Dave the third Efron comedy this year, after Dirty Grandpa and Neighbors 2, to pull off the Efron bingo.

-Sadly, that scene in the trailer where the girls beat the guys in a drinking contest is not in the movie.

41% – “Mike and Dave Need Wedding Dates benefits from the screwball premise and the efforts of a game cast, even if the sporadically hilarious results don’t quite live up to either.”