Better question: Off the top of your head, can you think of a single live-action comedy sequel that’s both better than its predecessor AND made just as much if not more at the box office?

It’s harder than you’d expect. You can certainly make a case for Austin Powers: The Spy Who Shagged Me, 22 Jump Street and Pitch Perfect 2. Maybe go out even further on the limb to champion Meet the Fockers, Grumpier Old Men or The Naked Gun 2 ½. Or start a real argument by proclaiming Wayne’s World 2, City Slickers 2 and Gremlins 2 to be the best films in their respective franchises before you realize those three sequels were all relative box office disappointments at the time of their release.

For the most part, though, we’re stuck with formula-repeating sequels which ended up mere historical footnotes, like Hot Tub Time Machine 2, Horrible Bosses 2, Bad Santa 2, Zoolander 2, Ted 2, Sex and the City 2 and so on (ug, The Whole Ten Yards) and so on (double ugh, Shanghai Knights). As Jason Reitman candidly told Marc Maron about the art of making a shitty comedy sequel, “There are plenty of films that made a lot of money where no one is interested in seeing another one. [But they make the sequel anyway] Oh yeah. That’s a paycheck for everyone. Everyone’s gettin’ paid, it’s a freebie.”

Bad Moms certainly made a lot of money. Released late in the summer of 2016, the film’s R-Rated raunch and refreshing outlook on the modern plight of overworked/underappreciated mothers clicked with audiences, who not only gave it a bigger-than-expected opening weekend but also a particularly long tail. By the end of the year, Bad Moms had grossed $113m domestic, second best for any 2016 comedy, trailing only Central Intelligence’s $127m.

Mid-budget specialty house STX finally had a hit. Formed by an ex-WB studio executive and backed by Chinese money, STX had been in operation for nearly two years and had yet to release a movie which grossed more than $43m. Then Bad Moms made $113m at home, $183m worldwide.

First, they celebrated, which I imagine looked something like this:

Then they got to work on a sequel as fast as possible. Bad Moms had barely made it to home video when STX dated a Christmas-themed sequel for November 2017 and announced the first film’s writer-director-producing team would return. Casting information soon followed, with Susan Sarandon, Cheryl Hines, and Christine Baranski announced as playing Kathryn Hahn, Kristen Bell and Mila Kunis’ mothers respectively.

However, as Reitman said, “There are plenty of films that made a lot of money where no one is interested in seeing another one.” And Bad Moms Christmas has the unmistakable feel of a cash grab sequel rushed into production to strike while the iron is hot without pausing to wonder if anyone actually wanted to see more of these characters.

The crucial difference is the Bad Moms set-up actually lends itself perfectly to a sequel, cash grab or not. There’s no high concept here, no one-and-done story formula that strains credulity on repeat (see: Weekend at Bernies 2, The Hangover 2). No, with Bad Moms there’s just the story of three moms trying to take back a little bit of themselves from their unhelpful partners (the men in both films are ornamental) and ungrateful kids. It makes just as much sense to see how that plays out over Christmas as it does over a PTA election.

Thus, we have a sequel about how our titular bad moms react when their own mothers come home for the holidays. What happens to their newfound confidence and assertiveness when their moms swoop in to continually undercut them (as happens with Baranski and Kunis), cling to them in scary co-dependence (as with Hines and Bell) or again beg them for money with false “I’ve changed. This time is different” promises (as with Sarandon and Hahn)? If the first film was centered on a generational conflict between mothers and children then surely the sequel can be about adult daughters and their complicated moms.

But, of course, their moms in this movie aren’t complicated; they’re stereotypes, perfectly played by three supremely talented actresses, but stereotypes nonetheless. There’s a judgmental perfectionist, clingy widow, and irresponsible deadbeat, and the story beats play out with little surprise. 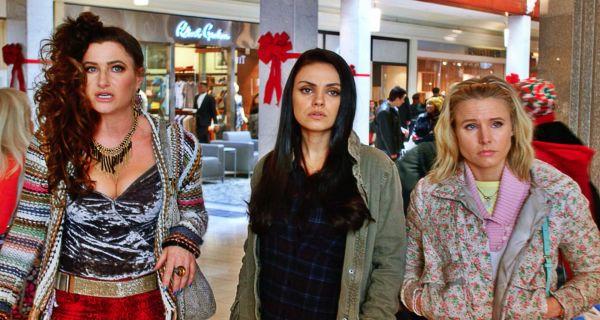 In fact, the entirety of Bad Moms Christmas is oddly more conventional than its predecessor. Despite its R-Rating, forced curse words and a raunchy side story involving Hahn’s infatuation with Justin Hartley’s firefighter-by-day, stripping-santa-by-night, the majority of Bad Moms Christmas hews surprisingly close to classic Christmas movie storytelling. Turns out, the stress of the season both tears us apart AND ultimately brings us back together. Take out some of the foul language and this could almost be family friendly entertainment

In this particular narrative, the signature “bad moms” indulgences, such as when the trio drunkenly parade through a mall and steal a Christmas tree, feel secondary, albeit still infectiously hilarious. More egregiously, the plot goes out of its way to punish Kunis for standing up to Baranski’s madness.

Part of what made the first film such a hit, though, is just how enjoyable these women are together. That remains true here. Simple scenes of Kunis, Bell and Hahn making gingerbread houses at a PTA meeting and debating who has it worse with their mom crackle with an irresistible energy. Hahn’s casual approach to parenting, such as collecting toys on her son’s floor when he’s sleeping and wrapping them up as new Christmas gifts since he’s too stupid to notice the difference, continues to delight. Moreover, Christmas sees fit to give Baranski, Sarandon and Hines several of their owns scenes together, and they turn out to be quite the comedy trio, possibly even setting up a spin-off, A Bad Grandmas New Years.

Not all cash grab sequels are bad. They’re not all Horrible Bosses 2. The actresses in Bad Moms Christmas seem just as engaged as ever, and the change in season and source of conflict helps make this sequel a little different, not a mere retread of the original’s formula.

That being said, Bad Moms Christmas still isn’t as good as the first movie. It’s too toothless and married to Christmas movie tradition for its own good. However, if you liked Bad Moms and enjoy seeing these actresses together then you are probably going to like Bad Moms Christmas. It’s a lesser effort, but nowhere near as phoned-in as it easily could have been. I laughed a lot, and from the sounds of it so did everyone else in the theater.

Now it’s your turn. Let me know how wrong or right I am in the comments below. If you want to make a separate argument for your pick for the best live-action comedy sequel I must demand you preface it with “I’ve got it by the way…” ala Mickey in Scream 2’s in-film discussion of best sequels.