They say you can’t truly consider yourself a film blogger until you’ve written the obligatory obituary for Tim Burton’s career, usually timed to the release of his latest film for which you feel little to no enthusiasm.

Okay. No one really says that, or at least I don’t think they do. However, while pondering how little I care about Burton’s new film, Miss Peregrine’s Home for Peculiar Children, I stumbled upon a mountain of essays from 2012 when the internet collectively decided Dark Shadows was finally a Burton/Depp collaboration too far. Somehow, Burton, the visionary animator who brought his signature aesthetics to live-action 80s classics like Beetlejuice and Batman, had become an undeniable hack, a complete sell-out who ran out of original ideas ages ago, if, indeed, he ever had any in the first place, or so the internet argued.

For example, 3BrothersFilm made the case that Burton doesn’t know how to tell a story and has coasted by on his fetishistic devotion to ugly and unoriginal visuals which see little use for any colors outside of white-black spectrum:

Burton doesn’t produce truly weird, interesting works of art, but commercial products targeted at the mainstream, intending to make them feel unique and interesting while actually giving them derivative stories and tired visuals. Burton is a hack director. A hack may have some filmmaking talent, and may make the occasional good movie, but overall a hack has no strong artistic vision or talent for storytelling. A hack makes movies only for money.

Burton isn’t interested in expanding his visual palette or exploring any meaning in the grotesquery of everything. His visuals are solely affectation, a strange stamp added onto a film to give it the semblance of originality. However, there has been nothing original about Burton’s visuals since Beetlejuice. From then on, he has merely retread the same ground. He is not a director who has grown over the years. As well, his visuals are muddy. His shots are crowded. He doesn’t have a sense of clarity and flow in his camera movements.

Similarly, MovieFone openly wondered if Burton has ever actually been a good director:

He’s surrounded by producers who sign blank checks for him to do his “Tim Burton” thing, then he casts his best friend and his girlfriend in his movie. He’s so ensconced in his little bubble that he’ll never hear “that’s a bad idea” or be pushed to find new ways to entertain. Looking at the last decade of his work, it’s clear that if he’s this one-note, then all the past glory he’s received needs to be given to other people.

So let’s stop pretending and call it like it is: Tim Burton is a really good art designer. And that’s it. He’s great at coming up with visual graphics that translate to impressive costumes, makeup, scenery and special effects. That’s an impressive skill set, but it doesn’t make him a good director. “Directing” a film comes with a lot of storytelling responsibilities that go beyond making everything look cool. Burton’s been handed a rare opportunity to tell stories to a global audience, and all he does is make toy commercials. Why do I have to pretend like he’s anything better than that?

CinemaBlend’s Sean O’Sullivan and Kristy Puchko, both self-proclaimed admirers of Burton’s earlier work, debated about where it all went wrong:

Kristy: I remember being underwhelmed by Sleepy Hollow, but it wasn’t until The Corpse Bride that I began to worry he was out of ideas. I enjoyed Charlie and the Chocolate Factory and Sweeney Todd the first time I saw them — both eagerly, opening weekend. But when I watched them later on DVD, I was struck by how little I still liked them. I think he makes money because he’s great at style and spectacle, but there’s so little substance anymore his more recent films aren’t as worth revisiting.

Sean: OK, I have a theory. And here’s where we’ll get into Big Fish. Because I believe that’s where Burton dared to lay his soul bare. It was a love letter to father figures. Probably his own. Definitely to men who were like Albert Finney’s character. I know that’s why Big Fish gripped my heart and squeezed it, because I saw my father — and our relationship — on screen. So it worked for me. But in general, it was overlooked. Yes, 77% on Rotten Tomatoes, but $66.8M at the box. This after Sleepy ($101M) and Planet of the Apes ($180M). He puts himself out there, and is rebuked. So he retreats, and plays it safer from there on out. “I’ll give the people what they want!” Not necessarily, “Here’s what I want. Follow me, or don’t.”

The notion that Big Fish somehow broke Burton’s artistic resolve is not too dissimilar from the theory which contends Adam Sandler’s later films grew increasingly lazy and mean spirited because the star held nothing but contempt for his audience after they repeatedly rejected his more ambitious experiments (e.g., Punch-Drunk Love, Spanglish, Reign Over Me, Funny People). I’m not suggesting Burton might have a similar disdain for his Hot Topic-loving audience. However, like Sandler he too has repeatedly been punished at the box office whenever he has pursued what might be considered passion projects:

Big Eyes is Burton’s tribute to a painter, Margaret Keane, he personally knew, Frankenweenie a full-film treatment of his old short which was itself a love letter to a deceased family pet, Big Fish a reflection on his then-recently deceased parents and Ed Wood his masterpiece. Of the 4, Ed Wood outright bombed whereas Big Eyes, Frankenweenie and Big Fish might just have broken even at some point down the road. Such penny-pinching is pretty far removed from the billion dollar gross of Alice in Wonderland. In fact, his remakes and remixes have always fared better at the box office than his twisted fairy tales, as seen in the below infographic:

It’s 2016 now. We can’t make those same old Johnny Depp-Helena Bonham Carter jokes anymore. Burton hasn’t directed Depp in a film since 2012, and he’s split from Carter in real life. Neither party are currently attached to any of Burton’s future projects (i.e., Beetlejuice 2) nor are they in Miss Peregrine. Burton doesn’t need Carter anymore now that he’s found Eva Green, who was the best part of Dark Shadows and will probably steal Miss Peregrine the same way she stole Penny Dreadful from her various male co-stars. This summer’s dreadful Alice sequel, which Burton merely produced, might be the end of the increasingly mockable Depp-Carter period of the director’s career.

Yet was it really all bad? Similar to CinemaBlend’s Puchko, I have found little use for repeat viewings of The Corpse Bride, Charlie and the Chocolate Factory and Sweeney Todd, yet I at least moderately enjoyed each one of them upon first viewing. Moreover, Frankenweenie is a macabre delight, understandably criticized for being a complete retread but perhaps undervalued for its heart (full disclosure: my status as a dog person makes me a complete sucker for a movie like this). Big Eyes, while perhaps more televisual than cinematic and a bit too reliant on the outlandishness of the real life story to carry the emotions, was a much-needed attempt to break from the stylistic norm. Sure, it’s ultimately yet another ode to an outsider, ticking off Burton’s consistent go-to trope, but at least the director’s heavy hand is more felt thematically than visually.

However, even as I attempt to defend Burton I still feel little to no compulsion to see his new film. His two most frequent regular players, Depp and Carter, are gone, replaced in part by the skyrocketing talent that is Eva Green. The script is based on an apparently fantastic and widely beloved novel, yet all I see from the trailer is another slice of mainstream filmmaking with its Burton filter turned on (e.g., Green’s a talent, sure, but she and everyone else in the cast look plucked straight out of a Tim Burton-specific central casting).

For some, the mere promise of Burton eye candy is enticing enough, comforting even, in an ‘at least you know what you’re going to get’ kind of way. That stopped working for me a long time ago. I was once enchanted by Burton’s art direction, mostly because as an 8 or 10-year-old it was undeniably unlike anything else I’d ever seen, but now I am bored by the drab and unappealing same-ol, same-ol of it all. 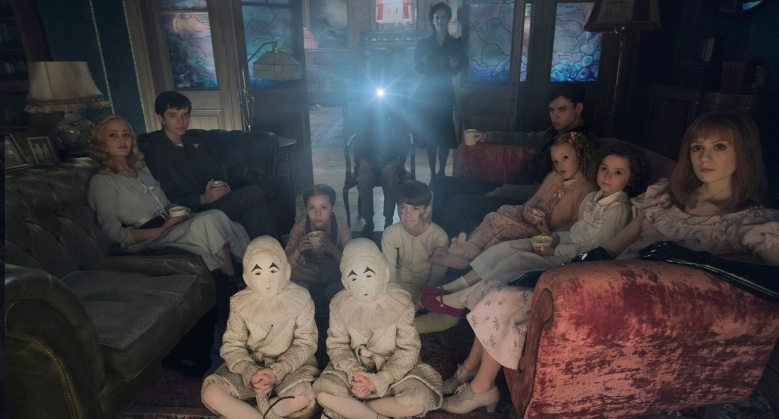 In a way, Burton has fallen into that Wes Anderson category of visually distinctive directors whose nearly unyielding commitment to their singular style makes them an easy target for satire and indifference. Burton just happens to have made way more money at it than Anderson, and has been at it so long that his earlier work truly does hold a special place in the hearts of many film fanatics. You watch a Wes Anderson and feel instantly compelled to straighten everything in your house; you watch a Tim Burton movie and think back to how much you loved Edward Scissorhands and lament how long it’s been since you felt that for one of his films.

Or so it seems to go. Personally, Burton’s older films – Beetlejuice, Edward Scissorhands, Nightmare Before Christmas, etc. – don’t have nearly as strong of a hold on my childhood as they do for others my age, thus limiting the nostalgic appeal of seeing Burton getting up to some of his old tricks.

Does that make Tim Burton a hack? A total sell-out? Has he always been this way, and we never noticed? Or is he simply a very visual thinker who’s only as good as his script, and is now struggling to come out of a prolonged commercial period in which he produced easily digestible, but non-substantive entertainment? And do you plan on seeing Miss Peregrine? “Tim Burton’s version of X-Men” just isn’t cutting it for me with Peregrine right now, not when Netflix is set to drop Luke Cage the same day Peregrine comes out: