To borrow a line from io9′s Katharine Trendacosta, “I don’t know how to blog about movies today.”

Donald Trump, the sentient septic tank, is the President-Elect of the United States of America, continuing a trend of hate-mongering nationalism and class/race/gender division which has been seen in recent elections around the globe, most notably the “Brexit” vote in the UK. It’s like the entire world is suddenly singing the MC Skat Cat part (i.e., “I take two steps back”) of Paula Abdul’s “Opposites Attract,” except we sure as hell aren’t singing the chorus (“But we come together because opposite’s attract”). In fact, some cop’s probably about to shoot MC Skat Cat for looking like a black person even though he’s just a cartoon cat who loves to dance (and to skat, apparently), and Paula Abdul’s probably about to be deported because with a surname like Abdul Donald Trump assume she’s Muslim:

Why the heck am I even talking about an old Paula Abdul music video? That’s how out of sorts I am right now. President Obama opened his remarks at The White House earlier today by pointing out the sun did, in fact, come out this morning, and it will do so again tomorrow. However, this feels like the sun rising on a scary new world. Donald Trump, IRL Biff Tannen and the least qualified person to ever run for the Oval Office, really is going to be the President. This is the man who, as Seth Meyers recently summarized:

Called Mexicans “rapists,” claimed the President was born in Kenya, proposed banning an entire religion from entering the US, mocked a disabled reporter, said John McCain wasn’t a war hero because he was captured, attacked the parents of a fallen soldier, bragged about committing sexual assault, was accused by 12 women of committing sexual assault, said some of those women weren’t attractive enough for him to sexually assault, said more countries should get nukes, said he would force the military to commit war crimes, said a judge was biased because his parents were Mexicans, said women should be punished for having abortions, incited violence at his rallies, called global warming a hoax perpetrated by the Chinese, called for his opponent to be jailed, declared bankruptcy 6 times, bragged about not paying his income taxes, shafted his contractors and employees, lost a billion dollars in one year, scammed customers at his fake university, bought a six foot tall painting of himself with money from his foundation, has a trial for fraud coming up in November, insulted an opponent’s looks, insulted an opponent’s wive’s looks and, oh yeah, bragged about grabbing women by the pussy.

As many political commentators, late-night comedians and writers for shows like Veep have repeatedly pointed out throughout this election cycle, you can’t make any of this shit up. If this was all a fiction being presented to us in some movie or TV show we’d soundly reject it as being too implausible. As a result, the exaggerated plots of certain political movies suddenly seem both more preferable and plausible than this waking nightmare.

Bob Roberts, Tim Roberts’ directorial debut, might not seem like much of an escape from Trump. Despite coming out nearly 25 years ago, it’s actually surprisingly prescient, as DailyKos.com recently pointed out:

Written, directed by and starring Tim Robbins, Bob Roberts is a mock-umentary about an ultra-conservative millionaire businessman—who’s also a folksinger—who  runs for the U.S. Senate in Pennsylvania. He is supported by fanatic followers. He spouts a xenophobic, America-first, me-first, all-about-the-money philosophy. His followers exhibit some very weird, cult-like behaviors, and are routinely violent against people protesting his candidacy. He even hosts a a beauty pagenat–and sings the theme song “She’s a Beautiful Girl.”

However, in the universe of the film the mass media is depicted as being disgusted by Roberts’ campaign from the get-go as opposed to enabling said campaign by treating it like a passing diversion, i.e., an easy soundbite or headline.

Why It’s Better Than Trump: At least this guy writes halfway decent folk songs with deceptively funny lyrics, such as when he rebuffs Woody Guthrie in a song entitled “This Land Was Made for ME.” 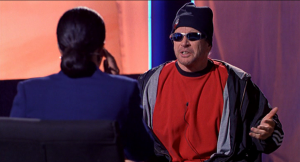 IMDB Plot Summary: Senator Jay Bulworth is facing speculation-induced financial ruin, so he puts out a contract on his own life in order to collect a large, new insurance policy for his family. Living each moment on borrowed time, he suddenly begins spouting raw, unfiltered–and sometimes offensive in word but satirical in spirit — thoughts to shocked audiences and handlers in the speech of hip-hop music and culture. His newfound uninhibitedness and new relationship with a black activist carry him on a journey of political and spiritual renewal.

Why It’s Better Than Trump: An old white career politician spends a couple of days more or less co-opting black culture and vernacular and turns around his political prospects as a result? Sure. Fine. Whatever. At least it’s only a senatorial race. Plus, while his motives and methods are highly suspect at least he eventually reaches out and tries to understand the experience of the average black person in the country.

IMDB Plot Summary: Bill Mitchell is the philandering and distant President of the United States. Dave Kovic is a sweet-natured and caring Temp Agency operator, who by a staggering coincidence looks exactly like the President. As such, when Mitchell wants to escape an official luncheon, the Secret Service hires Dave to stand in for him. Unfortunately, Mitchell suffers a severe stroke whilst having sex with one of his aides, and Dave finds himself stuck in the role indefinitely. The corrupt and manipulative Chief of Staff, Bob Alexander, plans to use Dave to elevate himself to the White House – but unfortunately, he doesn’t count on Dave enjoying himself in office, using his luck to make the country a better place, and falling in love with the beautiful First Lady

Why It’s Better Than Trump: The bad guys lose. The good guys win. Our ideals about the political system are ultimately upheld. Plus, Dave is just do darn likable, and Sigourney Weaver is a fantastic First Lady.

IMDB Plot Summary: Sassy postgrad Elle Woods is all about animal rights. In fact, she puts her nuptial plans on hold to head to Washington D.C. to get an anti-animal testing bill passed. Her building’s doorman quickly shows her the ways and workings of our nation’s capital.

Why It’s Better Than Trump: Because at least by the end of this largely innocuous updating of Mr. Smith Goes to Washington Congress adopts a new team building policy using Elle’s “snaps” method (i.e., write down your recent accomplishments on a piece of paper, put them in a hat and then have someone pull them out and read them to the group, asking everyone to snap their fingers in the air like a cooler version of clapping). Real Congress has never been remotely close to such level of across the aisle support because, after all, the “snaps’ method is just a silly little moment in an oft-forgotten Reese Witherspoon movie, but it’s a comforting thought nonetheless given the on-going friction which has plagued Congress for years. 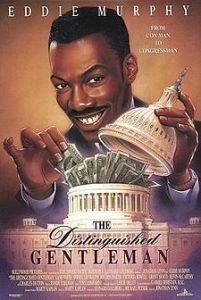 IMDB Plot Summary: A Florida con man uses the passing of the long time Congressman from his district who he just happens to share a name (Jefferson Johnson) with, to get elected to his version of paradise, Congress, where the money flows from lobbyists. But soon he learns the nature of the game and decides to fight back the only way he knows how, with a con.

Why It’s Better Than Trump: Because in this case if someone is going to con and lie his way into office at least he can be played by Eddie Murphy.

Interestingly, Bullworth, Legally Blonde 2 and Distinguished Gentlemen all end with quick jokes implying the lead characters will next pursue the presidency, such aspirations only coming up at the end because the filmmakers likely assumed the audience’s belief could be only be suspended so far. But truth is truly stranger than fiction. Bullworth, Elle Woods and Jefferson Johnson never took the White House in their fictional worlds because that seemed too crazy, but Donald Trump just did and it’s so, so crazy and so, so real.