Imagine there’s a comprehensive gun control bill in Congress which aims to codify into law many of the things polls indicate the majority of Americans support, such as a ban on gun sales to people who are on the no-fly list and mandatory background checks for all gun buyers. The NRA turns to DC’s most feared and amoral lobbyist to help them defeat the bill, yet she literally laughs in their face, quits her job at one of the city’s premiere firms and jumps ship to a smaller, liberal-leaning firm charged with swaying enough Senators to pass the bill. It’s not that she finds gun control to be a worthy cause; it’s that she relishes the challenge. Can she succeed where so many others have failed? And how many moral and ethical lines will she have to cross along the way due to her obsessive need to win? Well, she crosses enough of them to end up becoming the subject of a Senate ethics committee hearing.

That’s Miss Sloane, director John Madden (Shakespeare in Love, The Best Exotic Marigold Hotel) and star Jessica Chastain’s awards hopeful which recently opened (and bombed) in theaters. On first glance, this appears to be a classic case of a mesmerizing performance elevating an otherwise ho-hum film, i.e., the type of movie that earns an acting nomination (or two) and nothing else. My opinion of the overall film is somewhat higher than that, but there’s no denying Chastain (as the titular Elizabeth Sloane) is the main attraction. She completely commands the screen, be she tearing through pages and pages of Sorkinesque dialogue with astonishing ease, leveling those around her with a simple stern stare, popping mysterious pills like a female Dr. House or allowing the faintest of cracks to show in a rare moment of weakness.

Sloane presents herself to the outside world as an unmistakable and slightly terrifying force of nature, always two steps in front of both her opponents and friends. Actually, even using the word “friend” is inaccurate. To her, there are simply the people she has to beat and the people who can help her beat those other people. Everyone’s an asset, and while several of these assets (i.e., co-workers played by Mark Strong and Gugu Mbatha-Raw) openly question what turned Sloane into this single-minded political monster the film never pays this off in an overly cliched “this is the reason I’m like this” speech, the kind which might as well conclude with her reaching her hand out and pleading, “Oscar, please!” Instead, we get a brief flash of vulnerability in front of a lover (Jake Lacy), one she has repeatedly hired through an escort service (because she needs the release but has no time for a relationship) and grown somewhat attached to despite her better impulses.

This  restraint from delving too deep into Sloane’s background is partially due to the structure of the film, which is a government procedural first, character study second. The majority of our time with these characters is spent observing the back and forth political maneuvering between Sloane and her team of idealists and true-believers and the better dressed, noticably less diverse team headed by Sloane’s former boss at her former employer. She sways one Senator, they go after another. She plants one of her people at a fundraiser to ask one Senator about the bill in front of reporters and various cameras, they secure their own table at the fundraiser and plant their own operative. 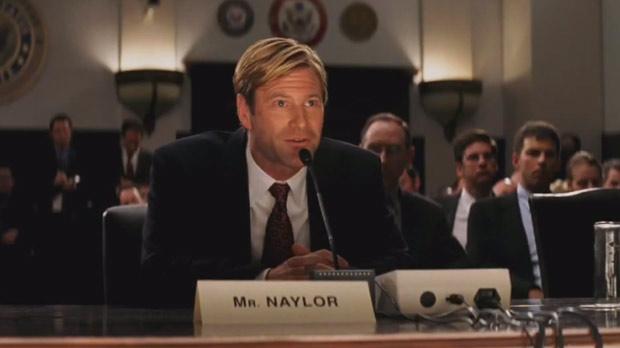 Just think of Miss Sloane as a non-satirical, more process-oriented version of Thank You For Smoking

Back and forth this dance goes, with Sloane continually gaining the upper hand until the opposition makes her the target, aiming to negatively associate the bill with her through mudslinging and personality politics. They want to utterly destroy her career, at the behest of their NRA clients who did not like being laughed at by her. Can the world’s best, most dedicated lobbyist truly withstand the collective might of the NRA?

It’s all very engaging and impecccably edited. Director John Madden admirably trusts the audience to keep up with everything, knowing that even if the little details might go by so fast as to lose certain people you can still understand the broad strokes of they need X amount of Senators, and every time they add a new one they lower the number on the big white board in our office.

However, this is also the type of film where your personal opinion on the central issue (and the stance the film clearly takes on that issue) will likely determine your enjoyment. The pro and anti-gun control arguments are present and accounted for, but the emotional plea is clearly for the former and the NRA clearly depicted in a more villainous light. As a liberal in favor of gun control, I found this very pleasing to watch, but was it simply playing upon my preconcieved notions, a movie version of a Facebook news feed filter?

Moreover, the secondary argument that our government is fundamentally broken, with influential lobbyists being but a sympton of the disease, plays better if you already believe that to be true. The problem there is Miss Sloane attempts to have it both ways, depressing you with the soul-crushing boot big money brings down upon the necks of all those who dare stand up to fight back before delivering you out on a high with a last act twist which while emotionally satisfying feels unearned.

Miss Sloane is both an engrossing political procedural and intriguing character study, sadly lacking the weight of its own convictions in the end but getting away with it due to our inability to ever look away from Chastain when she’s on screen as the titular flawed heroine.