We focus so much on opening weekends and second weekends that we often forget about the full theatrical run, quick to move on to the next big thing, calculating whether or not the shiny new thing packed in as many people in its first 3 days as pre-release tracking had predicted. So, while Rogue One and Sing currently conquer the universe Doctor Strange, Trolls, Fantastic Beasts and Moana are playing out their last days (or are they?), and I’m left looking over their box office totals and wondering, “So, is $332m worldwide for Trolls good or bad? I can’t tell.”

So, screw it, I’m taking a moment to provide some context to the numbers while asking how impressed we should be by four of the biggest blockbusters released in October and November.

What It Opened To: $85m domestic/$86m international

Context: The international debut is from 45% of the marketplace, and ranks well ahead of Ant-Man (+49%), Guardians of the Galaxy (+37%) ahead of Captain America: Winter Soldier (+23%) but about even with Thor: The Dark World (+1%) in the same territories. Domestically, this is easily the second best debut for any of the single-character intro films in the Marvel Cinematic Universe, behind only the first Iron Man ($98m).

Context: That’s a 2.7x multiplier in the states, dropping it perfectly in the middle of the MCU in terms of legs, better than Iron Man 3, Thor: The Dark World, Age of Ultron, Iron Man 2, Incredible Hulk, tied with Captain America: First Avenger, worse than Winter Soldier, Thor, Avengers, Ant-Man, Iron Man and Guardians of the Galaxy. It’s also roughly in the middle of the MCU (#7 to be exact) in terms of worldwide gross, although its first in that category among the non-sequels.

Verdict: It didn’t quite have the legs in the States it could have, considering it was once roughly keeping pace with the first Iron Man and now nears its end nearly $100m short of Iron Man’s domestic tally. In fact, its totals are now more on par with the only other MCU film to be released in November, Thor: The Dark World ($206m dom/$438m int./$644m world). However, if the question is whether or not we should be impressed the answer is yes. Like Guardians of the Galaxy before it, this was a risky, brand-extending movie for Marvel Studios that sparked with audiences more than most of their other more standard superhero movies. After this immense success, maybe Marvel will give a Netflix series to Doctor Strange’s cape.

What It Opened To: $46m domestic/$17m international

Context: That international total is only from 10 territories, and the closest comp for the domestic total is The Peanuts Movie, which opened to a nearly identical $44m on the exact same weekend a year prior.

Verdict: For those of us with little kids in our lives, Trolls is not actually the box office smash we might have assumed it to be based on how often we’ve heard our kids/nieces/nephews incessantly listening to the soundtrack and/or playing with Trolls-related toys. It’s far from a Turbo-Mr. Peabody and Sherman-sized money loser for DreamWorks Animation. Instead, it’s a modest hit ala Megamind, Puss in Boots and Over the Edge just with considerable boost from merchandise and toy sales.

Fantastic Beasts & Where to Find Them

What It Opened To: $74m domestic/$145m international

Context: BoxOfficeMojo concluded at the time: “This is the lowest opening for any film in J.K. Rowling’s Wizarding World series of films, but Beasts‘s opening is still on par with the likes of  Order of the Phoenix ($77.1m) and Half-Blood Prince ($77.8m), which went on to gross $292 million and $301 million respectively. Should Fantastic Beasts follow suit a domestic run anywhere from $284-290 million would be in the offing, though a safe expectation right now would seem to be around $275-280 million.

Looking beyond the domestic performance, the film’s international debut ranks in the all-time top 30, just behind The Hunger Games: Mockingjay – Part 2 and ahead of The Hobbit: An Unexpected Journey.”

Context: Par for the course for Warner Bros. in 2016. They released an expensive movie with an insanely high level of brand awareness, and watched as it made gallons of Galleons yet also confounded audiences and box office analysts. See also: Batman v Superman, Suicide Squad. However, Fantastic Beasts was always a strange [wait for it] beast as a mostly original prequel to an insanely successful film series based on an equally successful series of children’s books. The closest comp wasn’t really any of the other Harry Potter movies but instead first Hobbit movie, itself also a prequel released in the final months of a year. Fantastic Beasts hasn’t come close to Hobbit’s $303m dom/$718m totals, but is similarly playing bigger overseas than at home (an identical 30/70% domestic/international split).

Verdict: Beasts made an additional $4m domestically this weekend meaning its totals are still growing, albeit incrementally. Still, it’s done the lion share of its business already, and currently ranks as the lowest-grossing Harry Potter-related film of all time, domestically and worldwide. That can’t be what the studio was hoping for, but $776m worldwide is still a lot of money (obviously). It’s at least the highest-grossing Harry Potter-related film in China. So, there’s that. 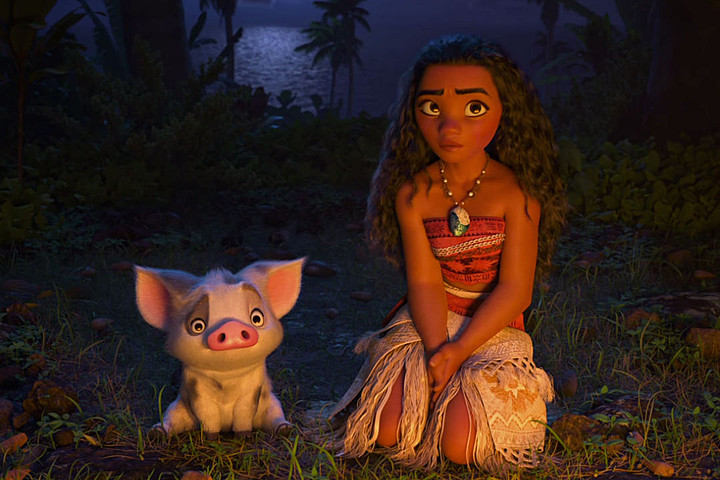 What It Opened To: $81m domestic/$17m international

Context: The $81m is the second highest five-day Thanksgiving debut in history, trailing Frozen’s $93.6m  and barely beating Toy Story 2’s $80.1m. The international debut, on the other hand, is from just a handful of territories, as Disney Animation Studios typically breaks with industry norms by focusing first on a domestic release before gradually expanding into international territories.

Context: So, no, this is not going to be another Frozen, which rode a $66m opening to a seemingly unstoppable theatrical run, ending with $400m domestic/$1.2 billion worldwide. Much of that came only after Frozen’s first full month of domestic release at which point Disney also expanded it into a final batch of major international territories. However, even with Sing out there right now Moana surged this past weekend from #4 to #6 on the domestic top 10 chart, meaning after 6 weeks of release it could be entering its own Frozen-esque second wave of popularity where a steady stream of repeat viewers and newbies prolong its box office life and boost its totals.

Verdict: Too early to tell. By Disney Animation Studios standards, Moana’s already bigger than Wreck-It Ralph and will soon surpass Tangled, but probably doesn’t have the juice to challenge Zootopia (and definitely not Frozen).